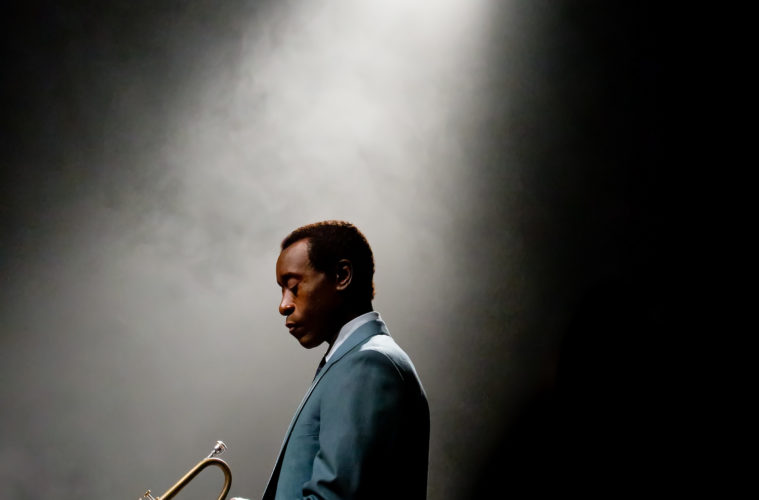 I don’t know why any film about someone as innovative, unstoppable, and crazy as Miles Davis leaves so little impression, but to begin addressing that question would require remembering many significant things from Miles Ahead. This slip-up grates for a few reasons. First and foremost is, indeed, the obvious disconnect between what fascination a man creates and how a feature about his life pulls us in, and this nagging sense of failure extends toward the knowledge that this work is a labor of love. More than the story of a significant figure, Miles Ahead is also the crowdfunded-to-make-sure-they-can-do-it-right feature debut of Don Cheadle, who, from the first second of being onscreen, makes clear that he’s putting a lot on the table.

It’s not just the wig, the glasses, the scratchy voice, or the jittery physical presence; it’s that all of these are working in concert to make an impression on the audience. When he’s playing the later, rough-and-tumble days, Cheadle is burying himself in signifiers meant to make the “transformation” complete. Whether or not you buy it — I did, since Davis’ larger-than-life quality helps it get away with feeling like a performance — those hoping to see that side of his life will probably enjoy these segments, which follow the aging icon through a series of incidents that threaten his hermetic lifestyle. There’s the Rolling Stone reporter (a consistently evasive Ewan McGregor) who, after knocking on his front door — and getting knocked in the face a few times — makes clear that he only wants a cover story, despite a legion of questionable tactics; there’s Columbia Records’ pressure to make something of an unreleased, year-old session; there’s a cartoon-character music executive (Michael Stuhlbarg in full American Hustle mode) who will do anything to partner him with an up-and-coming musician (Keith Stanfield); but, worst of all, there is the self-destructive and unstable Miles Davis, who’s started using the hands that shaped a genre to throw punches and wave guns.

Immediately following a confrontation that brings all of these forces together and culminates with a “non-threatening” gunshot, he uses those hands to (quite literally; it’s a touch this film could’ve used more of) open a portal to his past. It’s wise of Cheadle and co-writer Steven Baigelman to make these encroachments on Davis’ personal being a catalyst for recollection, if only because it’s also a transition that shows a different way of thinking — something outside the chronological, reality-rooted encroaching of time — was at play here. The New York Film Festival’s closing title is, to this extent, not so dissimilar from its centerpiece, Steve Jobs, and Cheadle’s manipulation of sounds — how much jazz you hear! — and cinematographic palettes recalls the sense-memory qualities that helped lift Danny Boyle’s film from Sorkin-ized mediocrity to fascinating genre bender.

Or so it initially seems. Eventually, however, Miles Ahead’s strategy for shifting between this brief window and a longer, career-spanning timeframe are mostly dependent on Davis’ regrets, which mostly translates to “since something reminds him of the ways he mistreated his wife, let’s take it over to a chronology-adhering scene in which he mistreats his wife.” She, Frances Taylor, is played by Emayatzy Corinealdi, who gives the performance more life than is often expected from a spousal figure in this sort of project. (How many times have they been reduced to pearl-clutching women whose roll is to yell at their other half about not being around?) The extent to which Cheadle and Baigelman dote on her is less a result of bringing in new perspectives — nor should it be; that could muddy the sense of time and place that’s meant to propel everything — than it is a need to contextualize who Davis is and why he ended up being a certain way.

This is plenty reasonable from a dramatic stance, but the extent to which it functions as drama is more questionable. The longer we spend in typical biopic and / or of-the-era zones — the forming of a drug habit; the seeds of marital troubles; an instance of police brutality against an innocent black man that only helps the marriage find new strength; recording in the studio, and marital troubles then interfering with recording in the studio — the more I itched to return to Cheadle and McGregor as their narrative turns further toward the buddy-comedy mold. Some enjoyable banter and the lead’s convincing unpeeling of a hardened personality come to their full potential after Davis’ tape has been stolen by Stuhlbarg’s conniving businessman. What they do, of course, is go on a hunt that results in a gun fight, a car chase, and the single best detail this character piece has to offer: an old pro one-ups the younger hotshot with nothing but his voice and a trumpet’s horn.

It’s in these later passages where Cheadle best acquits himself best as a first-time visual stylist, in his partnership with cinematographer Roberto Schaefer building perfectly believable ‘50s / ‘60s / ‘70s aesthetics. His compositions and editing patterns (in the latter department aided by John Axelrad) cohere neatly with the mood of any given scene; although that creates stretches in which a mere shot-reverse shot dynamic is front and center, it nevertheless ensures that moments when Miles Ahead needs to be a visual extension of his drug-addled brain are convincing in shape and variety. (The standout — and, like the transition into his earlier days, something I wish was more indicative of the overall project — is essentially an in-camera flashback during a violent public encounter. There’s no missing it when it kicks off.) Outside a striking photo montage and hacky, silent spousal fight, little else calls attention to itself. This need not be a black mark; the flow of scenes is often smooth enough to prevent grousing.

And yet I wish Miles Ahead had more of the unpredictable force that’s made Miles Davis’ catalog so essential as part of the American lexicon. How telling that its standout moments offer a vision of something boundary-pushing. As is, Cheadle’s proven himself capable of trying his hand at a different side of the production process — and at least it’ll put a vast discography into your listening rotation.

Miles Ahead premiered at the New York Film Festival and will be released on April 1st.