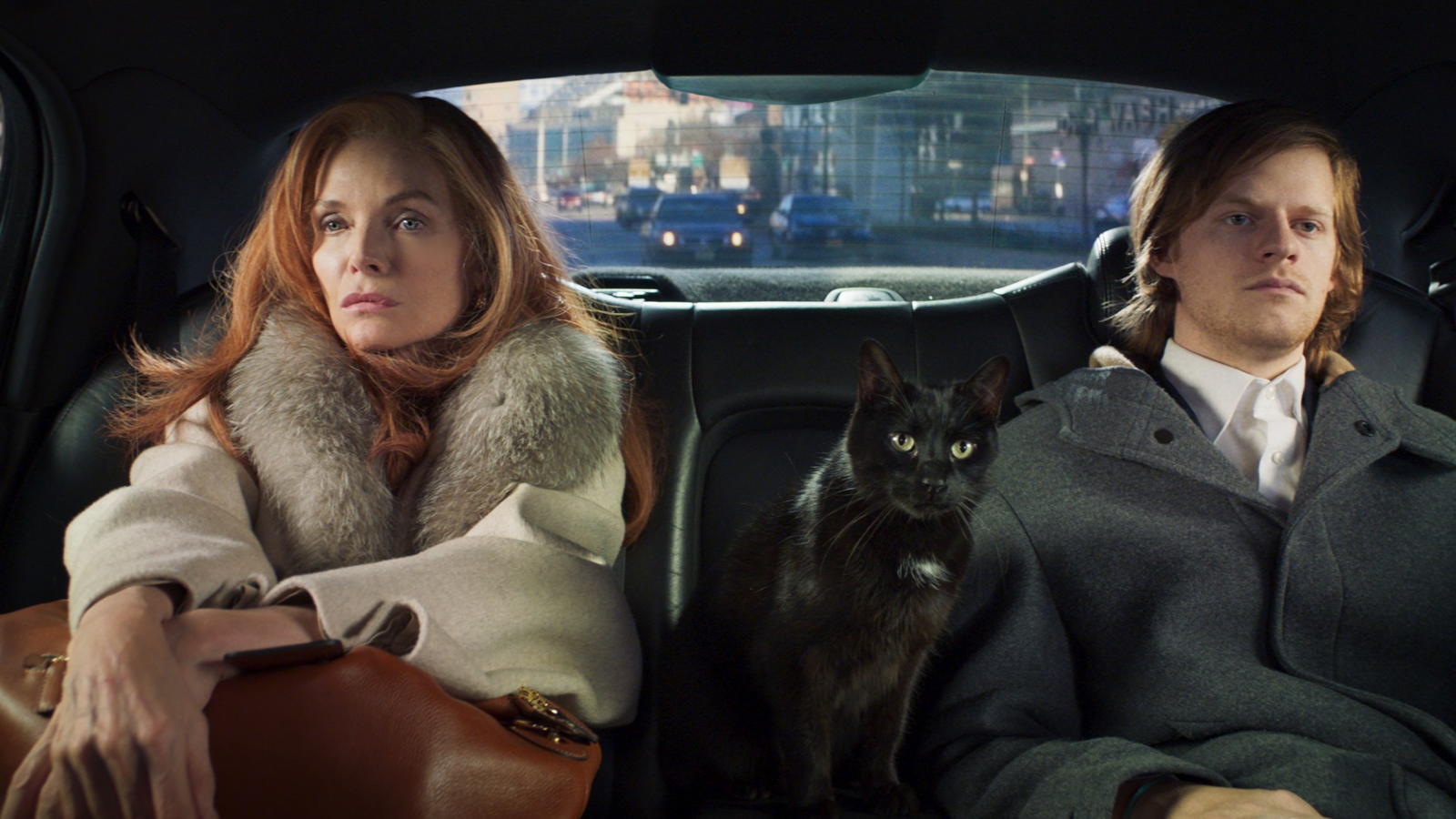 At a glance, Azazel Jacobs’ French Exit seems trivial, especially at a time when billionaires exist in droves, and the wealth divide continues to drastically widen. As the director’s second official collaboration with novelist and screenwriter Patrick deWitt, the closing film of the New York Film Festival cannot be confined to its logline: “A close-to-penniless widow moves to Paris with her son and cat, who also happens to be her reincarnated husband.” Opening with a written, serif font title card, the oddly upbeat, piano-heavy score whisks you into a world of lost riches, lost husbands, and lost relationships. Jacobs’ sixth feature is consumed with these oddities, contradictions, and absurd moments, consumed by the idea of a good, hearty laugh based on the melancholy of one’s circumstances.

Michelle Pfeiffer commands your attention as the oft-sharp Frances Price, a once-rich, now-widowed socialite spending her time in brownstones and speaking in sentences that sound like movie quotes. Early on in the film, she asks her son and companion, Malcolm (Lucas Hedges), “Did you drink to the brink of sound reasoning?” This high-societal, surrealist comedy lacks sound reasoning the more it continues, as deWitt’s script grows in (intentional) laughability. Malcolm possesses a devotion to his aging mother, and so, when she decides to uproot their lives to move from New York to Paris with only a stack of cash to their family name, he goes with her and leaves his fiancée behind.

The two hop on a boat to Europe, with their cat Small Frank in stow. Off the heels of his recent breakup, Malcolm meets and sleeps with the ship’s fortune teller, Madeleine (Danielle Macdonald), who senses a connection with the Price’s black cat. The boat ride, like the film, is marred by death, through Madeleine’s fortunes to fellow passengers and a trip to the ship’s makeshift freezer morgue. Frances’s loneliness rarely seeps into her conversations with others, only shifting when she lays alone on her bed, chatting with Small Frank about the newness of their situation. Without money, who is she? She doesn’t even seem to know the answer. To a certain extent, her richness, with all of its accessories, defined her. She’s lost that definition, and so, she’s just lost.

Strange characters enter the fold once in Paris, bringing delight and genuine, bellyaching moments, highlighted by a wondrous Valerie Mahaffey as Mademoiselle Reynard, an old admirer of Frances. Like all of the characters in French Exit, Mme. Reynard lives in a state of loneliness. As Frances says during their first meeting, “My life has fallen completely to pieces. And I’m sad about it.” The film becomes less about putting these pieces back together, and more about the pieces themselves. Though shattered, Frances continues living, spending, and in time, her kindness grows, even if it’s out of necessity rather than generosity.

As expected, chaos ensues, while the apartment triples in capacity, with a private investigator, Madeleine, Frances’s lone friend, Joan (Susan Coyne), and Malcolm’s ex-fiancée (Imogen Poots) and her new beau arrive to stay in Paris. The melancholy only appears to increase as each of these characters, outside of Joan, enter the fold, reaching its peak as these people speak on their own luckiness or unluckiness in their lives. Even those that are lucky have no choice but to stay in this apartment, sleeping on pullouts, chairs, and on the ground. French Exit isn’t about luck, though. It examines familial loss, parental neglect, and the wreckage of death with sly and bizarre comedy, owing much of its success to deWitt’s sharp script and source material.

A few sequences won’t make sense, and the small foray into police brutality is left unexplored and mentioned briefly. There likely could have been a chance at a longer discussion of class and economic disparity, though those become afterthoughts for Frances and for the rest of the characters. French Exit requires suspension of belief in its second and third acts, but the idea that someone deceased can embody an animal is common enough for you to play along.

Hedges stages a range of boyhood emotions with little dialogue. It’s reminiscent of his performance on Broadway in The Waverly Gallery, though Pfeiffer breathes life into the film. Each line reading is somehow poetic, pretentious, wistful, or heartbreaking, mostly some combination of the four. You can’t tell if she believes the words she speaks and writes, regardless of her constant eloquence, due to Pfeiffer’s brilliance. She always knows what to say, but rarely what to do. Without her money, she’s like the rest of us: exhausted and overwhelmed, trying to find joy in the relationships around her.

With Tracy Letts as the voice of Frank, inhabiting the cat known as Small Frank, French Exit finds comedy in all of its sorrow. The characters grasp at differing levels of companionship, and varying levels of closure, which becomes a resonant theme. This isn’t to say that these people contain honorable, or even respectable, amounts of virtue, but these characters make up for lost time, grapple with lost loved ones, and move forward in one sense or another.

Late in the film, Frances talks about the idea of a cliché with Joan, saying, “Many tell it, few people live it.” French Exit easily could have been an unnecessary cliché. Instead, Jacobs’ film provides a polished portrait filled with originality, melancholy, and comedy.