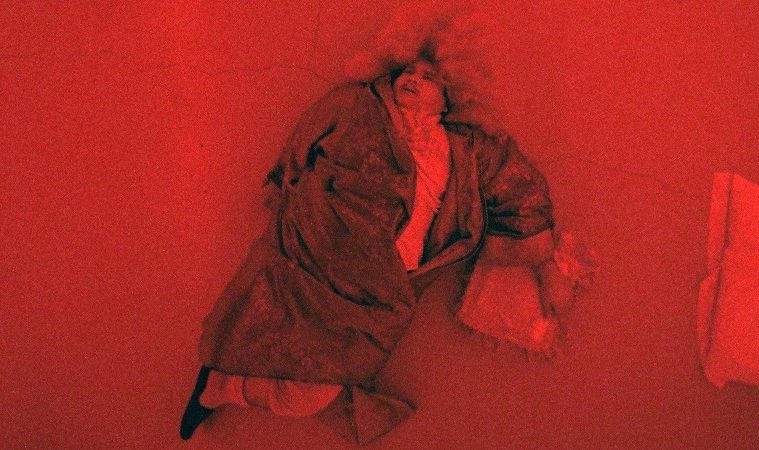 Albert Serra, after portraying The Death of Louis XIV, reincarnates the infamous monarch in a modern neon-red purgatory. The familiar face of Jean Pierre-Leaud is replaced by that of frequent Serra collaborator and non-professional actor Lluís Serrat. To describe Roi Soleil as a film would be imprecise; rather, the piece is a filmed performance–an installation–of the agony of the Sun King in a Lisbon gallery. The narrative, like in Serra’s previous work, is fairly straightforward yet abstractly rendered: a more rotund iteration of King Louis–who seems to expand as the piece progresses–suffers from what could most accurately be described as a stomachache, yet continues to shovel food into his mouth in spite of a clear discomfort. He begins erected upright, standing, watching over an anonymous, industrial space–a masterless domain– before taking a fall and continuing his feast laterally. The sounds of his discomfort–sometimes funny in a crude way, but more often painful to sit through–echo in the room, yet as he is displaced from time, there are no followers to offer help.

The implications of a work such as this are plenty and reliant on interpretation. Within the realm of art theory, this brings up the notion of culpability within spectatorship. A “twist” at the very end that reveals the audience in the gallery space breaking into applause exposes viewers for the voyeurs that they are, complacent in the pain of others as long as it serves the role of art. With a more economical lens, the art piece seems to use the fiscally-egregious figures of the past in order to criticize the way which economy has subjugated art; in this sense, the work’s offensiveness seems to make more sense, fitting into a more self-critical narrative that recognizes the capitalist mechanisms of high art as responsible for the deterioration of its values. Furthermore, the presence of centralist monarch Louis illustrates the large possible role that conservative and old white men have within the industry–an aspect of culture that has not changed, in spite of the passage of entire centuries.

All of these broad themes are interlinked, returning to the excess rooted in Serrat’s performance and the spectacle thereof. Though this is a grating work, challenging its audience with a barrage of uncomfortable noises and images for an hour, it does manage to stir up moments of excitement, like footage of a disaster. This same morally confused approach applies as well to modern media, in which people celebrate others for their wealth as both a form of wish fulfillment when things go well and twisted entertainment when things do not; the worship of those with power is balanced by a secret envy.

Still, though the work clearly has a lot on its mind–touching on a lot of easy subjects–it never allows itself to make any greater statements or cohere any of its ideas into a grander whole. This is not required of a film, of course, but when you capture a performance piece and repackage it as a different work, one would hope that the new medium has something more, or different to offer. The purpose of the film comes across clearly within the first few minutes, which calls into question the necessity of the full hour runtime. Time is definitely an aspect of the work, but I am not convinced that it is used in a way that is conducive to the art. The vagueness occasionally comes off as intentional, as a means of hiding the vacuousness of the gallery piece’s translation into cinema, topped off by the disconnect caused by the recorded nature of the piece, which forces the ending–which would otherwise be common knowledge–to act as a twist, perhaps for closure. In general, it lacks the inexplicable je ne sais quoi of Serra’s previous works. Maybe you had to have been there.