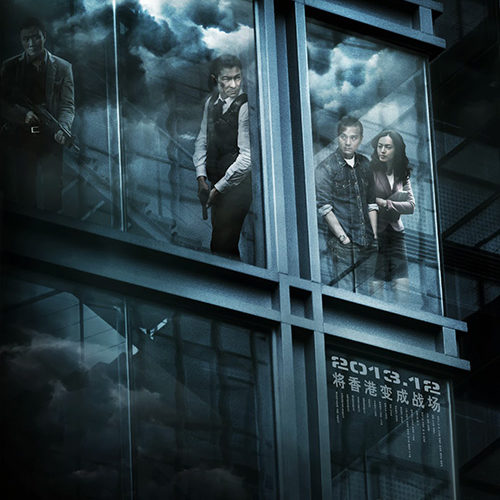 For fifty minutes—minus one crazy hand-to-hand combat fight on top of a fallen metal gate suspended over two adjacent buildings’ fire escapes in midair—writer/director Alan Yuen‘s Firestorm is a fast-paced actioner that fearlessly goes to the darkest corners Hollywood never would. After it crosses that threshold of time, however, the film goes off the rails like an out of control locomotive crashing into everything along its path until it culminates in an epic street shootout with enough destruction to rival Man of Steel‘s climax. At one point we’re shown five straight minutes of characters scowling and unloading automatic weapons at each other while empty shells cascade around them and innocent civilians are ravaged by bullet holes. Begging for suspension of disbelief, it’s a blast for all who comply. I’d describe the beginning as smart, but only if you can look past the contrivances and interwoven tapestry of characters blatantly serving the plot. I say this because it does actually seem natural when Police Inspector Lui’s (Andy Lau) friend/informant Tong (Philip Keung) and former classmate/thief Bong (Ka Tung Lam) exit prison at the exact same time. It proves to be a crucial bit of exposition later on too as roles reverse to show the duplicitous nature of man in both his capacity to turn to the dark side and the light before bringing everyone together again later as set-up for the bombastic finale. And at the center of this trio is our villain: the meticulous and slippery crime boss Cao (Jun Hu) who’s soon introduced as Bong’s current boss, Tong’s newest mark, and Lui’s archnemesis.

Yuen infuses a ton of tropes, almost as though he’s making a parody of the drama-heavy cops and robbers heist flick he’s actually making. There’s Lui as the force’s consummate Boy Scout who would never do anything even remotely against the letter of the law. Bong wrestles the appeal and excitement of the one occupation he’s ever known against the love of his life Bing (Chen Yao) for whom he’s promised to turn over a new leaf. Tong is shown to be the father of a young Autistic girl (Jacqueline Chan) whom he loves dearly and works undercover so often to support while her Godfather Lui checks in regularly. And Cao of course has legitimate business holdings so he may walk around in broad daylight laughing at the police while they grasp at straws, knowing they cannot touch him. For the first half of the runtime it’s all portrayed with extreme severity. This isn’t a bad thing either as I found myself on edge to see exactly what would happen thanks to an exciting armored truck robbery that ends with a brutally dark flourish I honestly didn’t expect (oh, those Western preconceptions Hollywood has seared into my brain). You buy into the chase and the dramatics because of how even-keeled Lui remains in the face of such horrors. If he can stay true while the world crumbles around him (and while a typhoon approaches despite this subplot adding nothing but dark clouds for some art shots midway through) we must too. Even Bong’s duplicity on the other side of the coin ratchets up suspense because you know the lie can’t last. Then hell officially opens.

I won’t promise you won’t audibly laugh at the nonsense that follows because it gets over-the-top crazy fast once cracks appear in Lui and Bong’s façades. And that’s before the cartoonish special effects arrive to turn the film towards farce before one more pitch-black death caps things off in hilarious, “did that really happen?” comedic fashion. Even as the proverbial crap hits the fan, though, Lau and Lam retain their unwavering stoicism and gravitas. Their characters find themselves standing alone in the hellfire as insanity explodes around them because the former sees it as his duty to clean the streets of these monsters while the latter has a promise to keep. Sadly for them—but exhilarating for us—there may not be many people left alive to reap the rewards for good or evil. More tropes arrive with an unplanned pregnancy, smaller characters pushed aside earlier (Lit Wai Leung‘s Kit and Ray Lui‘s Paco) grow larger as the plot calls for their necessity, and the goal of saving lives becomes a huge role in killing a bunch of faceless henchmen and civilians by the finish. You’ll already have either given up on the outlandishness or embraced it by this point, though. I implore you to do the latter because Firestorm is a chaotic mess of action that’s smarter than you might expect at first blush. No one is untouchable as far as death or tragedy is concerned and nobody is saved from the darkness of bloodlust and revenge once the law proves ill equipped to do its job. So buckle up, get comfy, and have some fun with the twists, turns, and carnage.