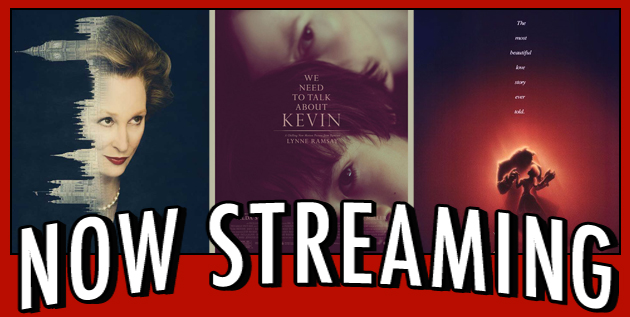 [Now Streaming] Your ‘Iron Lady,’ ‘We Need to Talk About Kevin’ & ‘Beauty and the Beast’ Alternatives Each week within this column we strive to pair the latest in theatrical releases to worthwhile titles currently streaming on Netflix Instant Watch. This week we offer alternatives to The Iron Lady, We Need to Talk About Kevin and Beauty and the Beast 3D.

In theaters this week, one of Disney’s biggest hits faces off against a brutal tale of motherhood’s dark side and a poetic portrait of problematic politician. Simply put, there’s some truly sensational cinema to be had. But if this won’t satisfy your film-seeing thirsts, we’ve got you covered with with a selection of bold biopics, alluring adventures, and dauntless dramas. Biopics need not be a boys’ club.
Check out these daring dramas directed by and starring the fairer sex:

The Countess (2009) Oscar-nominated writer/director/actress Julie Delpy pulls down triple duty on this harrowing biopic about the cruel countess Erzebet Bathory, best known for a bloodlust that inspired her to kill countless peasant girls to reinvigorate her beauty with their blood. Daniel Brühl and William Hurt co-star.

Tilda Swinton stars as a mother confronting her maternal failures in the wake of her son’s (Ezra Miller) merciless killing spree. John C. Reilly co-stars; Lynne Ramsay directs. Last month this stunning film opened in limited release, qualifying it for my 2011 Top 10, but this weekend its release widens. See it. [Full Review] Female Perversions (1996) Tilda Swinton stars as a lawyer torn between her professional ambition and her devotion to her shoplifting-addicted sister. Director Susan Streitfeld‘s provocative drama serves as an intriguing adaptation of psychoanalyst Louise Kaplan’s non-fiction book wherein she explored her theories of female-specific psychosis. As she is in We Need to Talk About Kevin, Swinton is fearless in her portrayal of an ambitious and aggressive woman who is ultimately undone by her own compulsions. It’s a film that’s as hard to watch as it is unforgettable…just like We Need to Talk About Kevin.

Dolores Claiborne (1995) John C. Reilly co-stars in the unsettling adaptation of Stephen King’s chilling novel. After her estranged mother (Kathy Bates) is accused of murder, Selena (Jennifer Jason Leigh) must return home to face the terrible possibility that her mother may be a murderer, which forces her to face some long-forgotten family secrets.

Afterschool (2008) Before he played a high school killer, Ezra Miller made his film debut playing a different brand of troublesome teen in this perturbing indie drama. Prep school loner Robert (Miller) keeps his distance from his peers by staring at them through his ever-handy digital camera. But his disconnect takes on a whole new level when he records the accidental deaths of a pair of popular girls, pulling him into an immoral realm of voyeurism.

When her father vanishes in the cold, dark woods, young Belle follows his path to a towering castle, where she meets a rage-filled prince who is the subject of a terrible curse. Disney’s gorgeous tale of girl meets beast returns to theaters with its majestic musical numbers, winsome characters and the addition of 3D. [Full Review] For more tales of Beauty and the Beast, check out these thrilling fantasies:

Beauty and the Beast (1987) Before Disney’s debuted, this television series set in contemporary New York City re-imagined the classic tale with plenty of action as well as stolen moments of enviable romance. Linda Hamilton stars as a beautiful Manhattanite who loves a noble but lion-like man (Ron Perlman) who resides far below the city’s surface.

Howl’s Moving Castle (2004) In Hayao Miyazaki’s enchanting adventure, the foils of beauty and beast get a strange twist. Emily Mortimer lends her voice to Sophie, a plain young woman who catches the eye of a glamorous wizard named Howl (Christian Bale). His favor of her attracts the wrath of a jealous witch who curses Sophie to age before her time. Looking to get her life back, Sophie tracks down the elusive Howl, and discovers this handsome man has an ugly secret.

Labyrinth (1986) Jim Henson’s deeply bizarre fantasy tale stars Jennifer Connelly as a teen girl who stumbles into a world of monsters and madness in search of her baby brother. To rescue him, she’ll have to face off against the weirdly attired and cruel Goblin King Jareth (David Bowie), whose strongest power seems to be his strange sexiness. Downton Abbey (2010) If you’re a fan of the world of Jane Austen–full of class conflict, biting dialogue and rollercoaster romances within a posh British backdrop–you’ll love the latest British series that has the Colonies abuzz. Downton Abbey centers on the affluent (but sonless) Crawley family and their fleet of servants, who are all thrown into world of uncertainty when an unexpected death throws the family’s inheritance into question. Set on the brink of World War I and a wide array of social change, this captivating series is less prim than its popular predecessors, allowing for a transgressive new twist on the standard period drama. While two of the Crawley sisters wage a cold war over husband seeking, the youngest is drawn to a socialist chauffeur and the emerging “Votes for Women” movement. Meanwhile, their parents aim to maintain the peace among their massive staff that includes a mysterious valet, a cantankerous cook, a gossiping ladies’ maid and a duplicitous footman. With its brisk wit, sharp dialogue and complex characters, Downton Abbey brings a new and progressive maturity to class conflict and create truly compelling television. Watch season 1 now, then check out the start of season 2 on PBS.