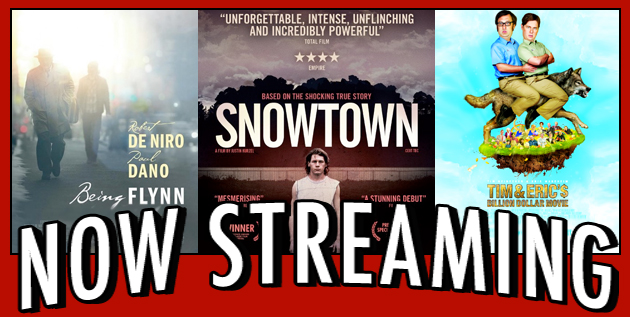 Each week within this column we strive to pair the latest in theatrical releases to worthwhile titles currently streaming on Netflix Instant Watch. This week we offer alternatives to Being Flynn, The Snowtown Murders, and Tim & Eric’s Billion Dollar Movie.

This Friday theaters will be filled with pairs of men, from a couple of kooky comedians, to an estranged father-son team, and a duo of deadly Aussies. But if these new releases aren’t enough to satisfy your craving for chills, laughs and heartwarming moments, we’ve got you covered with some of the best selections Now Streaming.

Based on Nick Flynn’s poignant memoir, this drama centers on his time volunteering at a homeless shelter, and how it led to an unexpected reunion with his estranged father. Paul Dano and Robert De Niro co-star; Paul Weitz directs. A Guide to Recognizing Your Saints (2006) Dito Montiel directs this gritty coming-of-age drama based on his memoir about growing up in 1980s NYC, where petty crimes and fighting was a common but dangerous pastime for the boys on his block. Robert Downey Jr., Shia LaBeouf and Channing Tatum co-star. Shot on location in Astoria, Queens.

A Mighty Heart (2007) This heart-wrenching indie centers on Mariane Pearl, who launched a desperate and tenacious search to find her journalist husband Daniel, once he was kidnapped while investigating Al-Qaeda in Pakistan for The Wall Street Journal. Angelina Jolie presents a guttural and acclaimed performance; Michael Winterbottom directs.

Borstal Boy (2002) Young Brendan Behan undergoes a political awakening during his time in a juvenile labor camp (or borstal), and is changed forever by his friendship with the boys he meets there. Peter Sheridan directs this drama bases on the political activist’s revealing autobiography; Shawn Hatosy stars.

Formerly titled Snowtown, this Australian drama reveals the shocking true story of how a lonely teen’s need for a father figure led to a string of grisly murders. Lucas Pittaway and Daniel Henshall co-star. Deadly Women (2005) One of my favorite guilty pleasures is this chilling documentary series that centers on murders committed by women. Each week tackles a new topic from revenge killings, to gold digger schemes to fearsome female crime bosses. These cryptic crimes are unraveled through interviews with investigators, forensic psychologists, the families and friends of the victims or killers, and some wonderfully mediocre re-enactments. I blame my early introduction to Unsolved Mysteries for my macabre appreciation of this show, that not only offers a horrifying insight into the criminal mind, but also provides some sense of closure as these are always closed cases. Every episode of Deadly Women gives you that same sense of closure that UM’s “Update” provided. Four seasons are Now Streaming.

Cropsey (2009) For a less exploitative look at true crime, I suggest this truly terrifying documentary that centers on a string of child abductions that occurred in Staten Island, NY, through the 1970s and ’80s. Documentarians Joshua Zeman and Barbara Brancaccio take a personal and profound look at their childhood bogeyman to explore the roots of an urban legend, and its impact on their hometown. Warning: this doc is extraordinary, but contains some truly shocking footage. It is not for the faint of heart!

Party Monster (2003) This wild biopic centers on NYC club kid Michael Alig, who first raised eyebrows with his crazy fashion sense, and then caused outcry when he brutally slaughtered a fellow party boy. Macauly Culkin and Seth Green co-star in this style-stuffed tale of murder and mayhem that suggests a troubling insight into the quest for celebrity. That Mitchell and Webb Look (2006) This incredible Brit sketch show offers a wide array of comedy styles, from the madcap adventures of the homeless junkie/self-proclaimed Sherlock, Sir Digby Chicken Caesar (pictured above), to the darkly comic post-apocalyptic Quiz Broadcast, to satirical takes on commercials and historical events. With so much remarkably witty and absurd offerings, it’s hard to pick a favorite, but mine may be their pitch-perfect parody of Pride & Prejudice. This is the best comedy show you’ve never seen. All four seasons are Now Streaming.

Jackass 3  (2010) Johnny Knoxville and the boys brought sophomoric humor to a dangerous and dynamic new level with their TV series, and have seriously upped the ante with each new movie. Here the boys play with killer bees, offer plenty of pain in slo-mo, and climax with a literal shit show. You’ll laugh ’til it hurts.

Ren and Stimpy (1991) Revisit the creepy comedy of your youth with this twisted Nickelodeon cartoon. Each episode offers a peculiar misadventure of the short-tempered Chihuahua Ren and his dopey cat pal Stimpy along with plenty of gross-out humor. Three seasons are Now Streaming. Sukiyaki Western Django (2007) The opening scene of this frenzied flick features Quentin Tarantino as a cowboy who takes down a group of bandits while reciting to them (and us) the central story of the movie we’re about to watch. It’s a bizarre scene, heavily stylized and shot on a sound stage set that revels in its artificiality, going so far as to have blood splatter on the painted background. This sets the stage to one of the most truly unique movie experiences I’ve ever had, and one I revisit far more than I’d like to admit. Takashi Miike‘s ode to spaghetti Westerns, mixes in elements of Asian mythology and culture to form something not only intense and hyper-violent, but also wildly funny. Miike’s decision to have the nearly all Japanese cast speak in English and Old West slang yields unintentional (or intentional?) hilarity as lines like “keep it in your pants, Lady Liver” get mangled due to their thick accents. Maybe that says something bad about me that I don’t want to deal with. Sukiyaki Western Django is not a movie for everyone, genre fans and Miike obsessives are its main audience, but despite the fact that it’s a take on tried and true formulas, it’s simply something that feels 100% its own movie. You can’t say that about a lot of others.