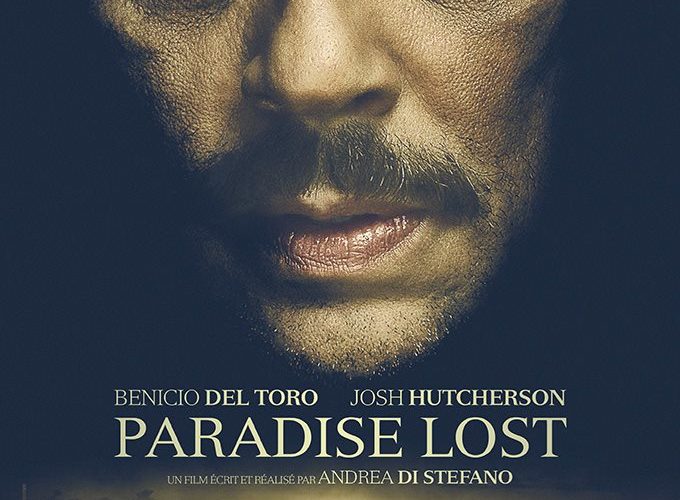 Few casting choices seem more fitting than Benicio Del Toro taking on the infamous crime figure Pablo Escobar, one reason why we’re looking forward to the upcoming drama Paradise Lost. Coming from Life of Pi‘s Andrea di Stefano, who directs here, the film follows a surfer named Nick (Josh Hutcherson), who falls in love with a girl, Maria, whilst visiting his brother in Colombia. When he realizes her uncle is the drug kingpin, things get a bit dicey.

While it’ll stop by TIFF soon, it actually premiered at Telluride over the weekend, where it earned favorable notices. THR said it’s “an impressive debut, an ambitious project pulled off with confidence” while Variety added, it’s “an odd mix of action movie, romantic melodrama and cautionary traveler’s tale, which works better than it should thanks to Del Toro’s fascinating performance and Di Stefano’s assured, muscular helming.”

One can now check out a new, full international trailer below giving us a better idea of what to expect for the film also starring Claudia Traisac, Brady Corbet, Carlos Bardem, and Ana Girardot. More than twenty years after his death in 1993, Pablo Escobar’s impact on Colombia is still impossible to measure. His cocaine trafficking empire made him one of the wealthiest criminals in history, and he was responsible for the deaths of thousands. Yet the Robin Hood-like persona he cultivated, along with his brief political career, rendered him a folk hero among some of his fellow Colombians. Escobar: Paradise Lost is a chilling drama, based on a true story, that offers us a fascinating glimpse of Escobar’s deadly allure.

Told from the perspective of Nick (Josh Hutcherson), an innocent surfer from Canada, Escobar: Paradise Lost unfolds during the final years of Escobar’s reign. Nick and his brother Dylan (Brady Corbet) set up a modest surfing retreat near Medellin, where Nick meets the woman of his dreams, Maria (Claudia Traisac), who is busy campaigning for her politician uncle. That uncle turns out to be Pablo (Academy Award-winner Benicio del Toro), who invites Nick to a party at his “cottage,” a sprawling, Xanadu-like jungle fortress. When he hears of the trouble Nick and Dylan are having with some local thugs, Pablo vows to “take care of it.” The thugs turn up dead, and suddenly Nick finds himself immersed in a world of wild extravagance, corruption and bloodshed — one he will find nearly impossible to escape.

The directorial debut of actor Andrea Di Stefano, Escobar: Paradise Lost comes at organized crime from an unusual angle. Movies typically show crime syndicates as closed hierarchies, but Nick goes from outsider to insider in a flash — Pablo’s devotion to his niece is so fierce that he doesn’t hesitate to incorporate Nick into the family business. The question is: how far does Pablo expect Nick to go in exchange for his hospitality? Riddled with tension, Escobar: Paradise Lost takes you on a careening journey into recent history, one you won’t soon forget.