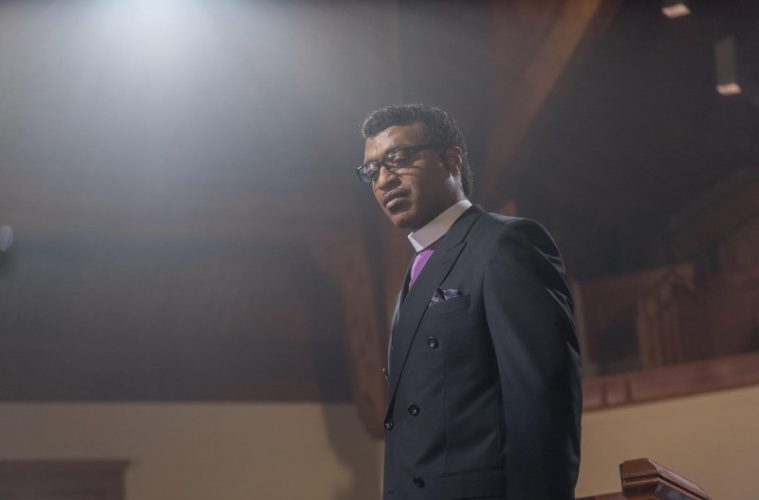 Juan Martin del Potro just ruined the match-up everyone wanted to see at the 2017 US Open—a semi-final pitting Rafa Nadal against Roger Federer. Despite both being in their thirties, their rivalry has never stopped. What’s intriguing, however, is how amiable it has always been (or seemed to be). With the quieter Pete Sampras and emotional Andre Agassi a generation earlier, the same was true despite their differing personalities and server versus returner billing. You could call the former a product of the latter and the latter a product of the explosive combat before them between “ice cold” Björn Borg and New York “superbrat” John McEnroe. The glaring difference of course is that their iconic war was augmented off-court by the media. It may have only really lasted two years, but the effect it had on the sport of tennis was permanent.
– Jared M. (full review)

It’s rare that mainstream filmmakers attempt to take seriously matters of faith – a subject personal to a majority of people but which movies have historically handled clumsily. This perhaps exposes the gap in the competencies between the greats and the merely good, OK, or less. It takes a true understanding of an art form to use it to express the ineffable, spiritual aspects of human experience. The ways of doing so do not exist in the conventional toolkit. Come Sunday makes an admirable effort to delve into religious conviction and changes in faith, but comes up feeling too normal and disconnected from those matters. – Dan S. (full review)

Winner of Slamdance’s Grand Jury Prize, Dim the Fluorescents is the kind of dynamic, entertaining debut feature that hopefully puts its cast and crew on the map. Taking place in the city of Toronto – which is currently going through its own indie cinema renaissance – director Daniel Warth and co-writer Miles Barstead have put together a film that crackles with energy along its lengthy, surprisingly breezy two-hour-plus runtime. It’s a film about the struggle of making a living in the creative arts that’s bursting with creativity, zig-zagging from one tone, style, or form to the next at a moment’s notice. It’s far from perfect, but the commitment from its filmmakers and two leads provide the film with a vitality that’s well worth celebrating. – C.J. P. (full review)

Huang Hsin-Yao is a new voice in independent Taiwanese cinema, and his first narrative feature–an adaptation of his short film The Great Buddha–carries itself with all of the vitriol that one would expect from somebody angry at the state of the Taiwanese film industry and government. This is apparent from the outset of The Great Buddha+, when Huang speaks to the audience as the credits roll, speaking harshly about the producers and delivering a personal statement. This anger remains throughout–a character named after the producer that Huang is particularly dissatisfied with is even killed off in a darkly humorous manner. – Jason O. (full review)

Actors put themselves in others’ skins — or they put others’ heads inside their own. Television journalists adopt a persona and try to deliver important information. Women erect calculated fronts to navigate environments not built for them. Many people suffering mental illness do their best to maintain a semblance of “nothing’s wrong.” Film directors orchestrate elaborate works of emotional manipulation. Documentary film directors do so with factual material. Such performances often overlap in the course of life and work; all of them intersect in Kate Plays Christine. – Dan S. (full review)

In a year somewhat short on groundbreakers from experimental cinema, Solnicki’s operatic, radically loose portrait of teens trapped in limbo stood out. The scenes, if they can be called that, are minutely styled and observed, wholly self-centered snippets of life unrelated to one another. The way they deny any attempts at reconstructing a narrative confounds and grates but somehow also mesmerizes and feels tremendously, inexplicably liberating. Composed with spellbinding exactitude, it’s best to just give oneself over to these 72 very strange minutes and be amazed by how even the cooking of an octopus can look so damn meaningful. – Zhuo-Ning Su