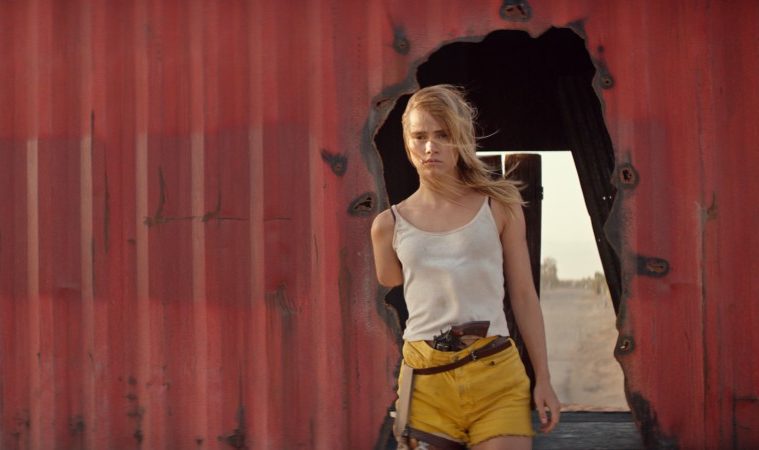 Ana Lily Amirpour’s second feature shoots for Harmony Korine meets Mad Max and would have nearly almost hit the mark were it not for the gratingly aloof attitude and the swaths of directorial license being taken. The Bad Batch — an ambitious, expansive dystopian sci-fi western which features partying, drugs, and cannibals — might come as music to the ears of diehard fans of films like Spring Breakers and Gummo (a kid doesn’t quite eat spaghetti in a bathtub, but a kid does eat spaghetti after being in a bathtub). However, beneath its dazzlingly hip surface the script and characters leave much to be desired. It’s like taking a trip to Burning Man: a pseudo-spiritual, uniquely punky experience perhaps, but one that’s full of annoying rich kids and ultimately emotionally shallow. – Rory O. (full review)

Though it may not feel fully inspired so much as competently pre-visualized, Kong: Skull Island fits snugly into the growing canon of reboots that exist within ever-expanding movie universes. That’s a first sentence to a positive review that perhaps reads a bit more cynically than intended. Directed by Jordan Vogt-Roberts and written by a bunch of dudes (Dan Gilroy and Max Borenstein and Derek Connolly with a story credited to John Gatins), this umpteenth version of the King Kong story pulls from every available pop-culture source in building a fun creature feature. Much of the credit goes to the breathtaking effects and brisk pace, which distract from some lofty line readings and silly plot devices. – Dan M. (full review)

One of the greatest prison escape dramas of all-time, Jacques Becker’s recently-restored Le Trou is a masterclass in tension. By putting us both in the physical and psychological headspace of our protagonists, it’s an enveloping experience as we see a number of close calls, leading up to one of the most unforgettable endings in cinema. – Jordan r.

It’s time for another Disney Princess movie, and you know how it goes. Disney knows too, and wants you to know that it knows. When the title character of Moana (Auli’i Cravalho) denies that she’s a princess, claiming that she’s merely the daughter of her island’s chief and the next chieftain, her adventuring partner Maui (Dwayne Johnson) asserts, “Same difference,” and that, “You wear a dress and have an animal sidekick. You’re a princess.” But Disney is doing its best to make the culture rethink cinematic fantasy princesses, countering the stereotypes of helpless femininity (which the studio largely put in place) with a new roster of highly capable action heroines. And Moana is, as they call it, a good role model. And the movie around her is fine. – Dan S. (full review)

Nobody Speak: Trials of the Free Press (Brian Knappenberger)

Nobody Speak: Trials of the Free Press uses a salacious story and website as the launching pad to discuss where we currently are, so much so that I imagine director Brian Knappenberger — who uses footage from President Trump’s infamous press conference only a few days before the film’s Sundance premiere — may wish to stay on the story. Gawker, a site spun out of Gizmodo, was founded to share the types of stories mainstream news outlets would often shy away from, including celebrity sex tapes, outings, drug use, and allegations that have swirled but not picked up traction. They’ve featured Rob Ford smoking crack, Bill Cosby’s multiple accusers, Hillary Clinton’s emails, Tom Cruise’s prominent role in Scientology, and the one that brought them down: the infamous Hulk Hogan sex tape recorded for private use by Hogan pal and infamous Tampa shock jock Bubba the Love Sponge Clem, best known nationally for his stint on Howard Stern’s satellite channel. Bubba’s antics will no doubt some day be the subject of a documentary of their own, from his role in both the Hogan affair to his odd appearance in the David Petraeus saga. – John F. (full review)

Jim Jarmusch proved he was back in a major way with Only Lovers Left Alive a few years ago, and the streak continues with Paterson, a calm, introspective drama with such positive views on marriage and creativity that I was left floored. In following the cyclical life of Adam Driver‘s Paterson, a bus driver in Paterson, New Jersey, who also has dreams of being a poet, Jarmusch superbly shows that one’s own life experience — however seemingly insubstantial — is the only requirement to produce something beautiful. Moreso than any other film in 2016, this is the kind of world I want to live in. – Jordan R.

After the pleasant fluff of its kick-off installment and the frog march of unpleasantness that was Into Darkness, the rebooted Star Trek film series finally hits a fun median between big-budget bombast and classic Trek bigheartedness with Star Trek Beyond. Does the franchise’s full descent into action, with only the barest lip service paid to big ideas, cause Gene Roddenberry’s ashes to spin in their space capsule? Probably, but in the barren desert of summer 2016 blockbusters, this is a lovely oasis. – Dan S. (full review)

Perhaps a point of contention on New York Times’ top 25 films of the 21st century list, Olivier Assayas’ Summer Hours is a commendable top 10 pick. Led by Juliette Binoche, Charles Berling, Jérémie Renier, and Kyle Eastwood, this drama follows a family reuniting following the death of their mother. Like the best of Assayas’ films, it’s an impeccably-crafted, subtly-moving experience, one that wades in the ideas of the value of what we hold on to and a graceful reflection on the passage of time. – Jordan R.

The world of Daniel Clowes is one without manners, glamour, and tact, but it is also one of uncomfortable truth, as scathing as it might be. One may have never verbally conveyed the discourteous musings of his characters to the extent to which it is their everyday vernacular, but we’ve all had similar thoughts when life isn’t going our way. The latest adaptation of his work comes with Wilson, directed by Craig Johnson (The Skeleton Twins), featuring a role Woody Harrelson is clearly having the time of his life with. Despite his commitment to a lack of civility, there’s a darker film lying in the cynical heart of Wilson, one that gets squandered by its mawkish aesthetic and lack of interest in exploring these characters beyond their crudeness. – Jordan R. (full review)

The Zookeeper’s Wife begins with those five famous words that hold the power to either become a film’s dependency (and therefore downfall) or its empowering catalyst, laying the foundation to convey a poignant tale: “Based on a true story.” Fortunately, The Zookeeper’s Wife sticks with the latter, and the true tale being told is one for the ages. Niki Caro‘s drama follows a couple who hide Jews in their zoo and use it as a point of passage and escape during the Nazi takeover of Warsaw. The narrative is a simple one, allowing The Zookeeper’s Wife to shine in its performances, imagery, and storytelling, which it pristinely accomplishes. – Chelsey G. (full review)

Rodeo and The Moment of Truth
Who Are You, Polly Maggoo? and Quadrophenia
An Actor’s Revenge
Her Brother
Conflagration
The Woman in Question
The Importance of Being Earnest

Paris Frills
The Train to Moscow:  A Journey to Utopia
Lost in Lebanon
Being 14
Molly’s Theory of Relativity
Le Moulin