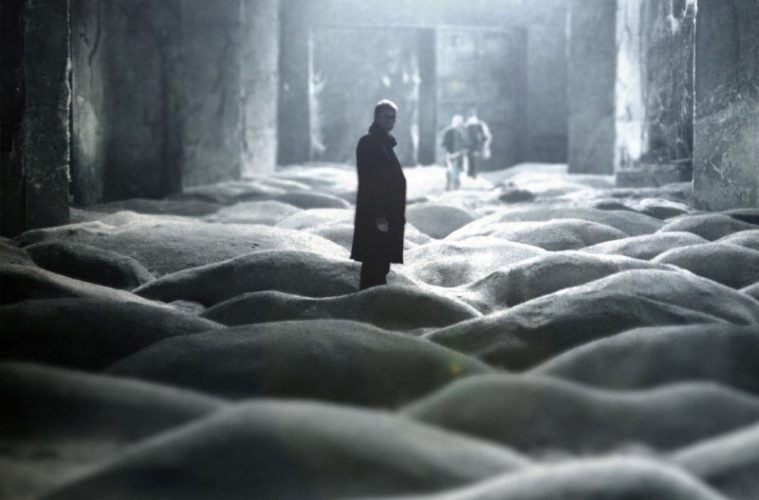 Talk to “true” Norwegian black metal fans and they’ll tell you Michael Moynihan and Didrik Søderlind’s book about the scene’s origins and criminality is a bunch of baloney (but in much harsher words). It’s interesting because the facts behind a series of church burnings, the suicide of a lead singer, and two subsequently high profile murders are indisputable. Those who were tried and found guilty before serving their time in prison don’t dispute the acts themselves, but merely the way in which they are presented. And who are we to defy them? These are convicted monsters that continue making music today for a rabid fan-base reveling in their no-holds-barred demonic creed. They’ve got their reputations to uphold and this story works to question their mettle let alone sanity. – Jared M. (full review)

Death stalks every moment of Paddleton, the sophomore directorial effort from Alex Lehmann, who co-writes this script with Mark Duplass, his star here and the co-star of his first film Blue Jay. Michael (Duplass) is dying and there’s nothing he can do about it. He enlists his upstairs neighbor Andy (Ray Romano) to help him enjoy the months left. Not to do anything special, mind you, but rather the things Michael knows he likes: watch their favorite movie Death Punch on loop, make pizza and play Paddleton, a hybrid racketball game of sorts. A shutdown drive-in serves as their court, and the game looks legitimately fun on screen. There’s also a final prescription: a medication Michael can take that will kill him before “things get really bad.” Though Andy’s reluctant with all of it, especially the last part, he listens to his friend. – Dan M. (full review)

Liberalism will eat itself! At least according to The Party, that is, and we’re not just speaking figuratively. Indeed, at one point in Sally Potter’s new film — a riotous, if undeniably stagey black-and-white mid-length feature — a central character (played by Kristen Scott Thomas) decides, however subconsciously, to chew her own arm instead of sensibly taking out her anger on her unfaithful husband. “But I don’t believe in revenge,” she cries out. You can tell even she is having a hard time believing it. This poor soul — the main host of the titular gathering – – has just learned that her husband, Bill (Timothy Spall), is not only dying of cancer, but has chosen to live out his remaining days with the younger woman with whom he has been having an affair for the previous two years. – Rory O. (full review)

To say nothing of Impolex, a creative riff on Gravity’s Rainbow, Alex Ross Perry’s The Color Wheel and Listen Up Philip, two incisive takedowns of a particular kind of self-loathing narcissist, were somewhat limited by a directorial approach that evokes the words “thesis-driven.” For all his sharp observational power and unhinged humor and all the talent on display, they suggested, respectively, a writer-director unafraid to let accusations of misanthropy interfere with character diagnoses and one unafraid of rapidly expanding his skill set and making increasing use of available tools. But it isn’t until Queen of Earth that these came together. The camera is often placed excruciatingly close to actresses Elisabeth Moss and Katherine Waterston, providing an inescapable sense of claustrophobia, and dreams, hallucinations, and flashbacks interrupted the story with the confidence of his well-documented literary idols. At the same time, Queen of Earth makes so full a use of a learned filmic language that influences – Fassbinder, Polanski, Bergman, Altman, Allen – pile up in such numbers that they seize to be of any use. – Forrest C.

In Ben Wheatley’s third film Sightseers, the British director, known for taking scenes of normalcy and then spiking them with extreme violence, continues his streak of creating memorable unconventional cinema. The biggest difference compared to his two previous films, Down Terraceand Kill List, is the focus on comedy, in particular the dark kind. It’s a slightly different genre for Wheatley to explore, but he does so admirably, creating a film that is equal parts absurd as it is berserk. Starring a pair of stand up comedians, who also co-wrote the script together, and produced by Edgar Wright, Sightseers is a unusual blend of exquisite cinematography, hilarious ridiculousness and over the top death and gore. – Raffi A. (full review)

Andrei Tarkovsky’s a classic of science fiction and Russian cinema, Stalker, is the latest pick from The Criterion Channel for their Movie of the Week. On a special Patreon-backed episode of The Film Stage Show, we went into The Zone and you can listen to our in-depth discussion here.

The Terminator
What They Had