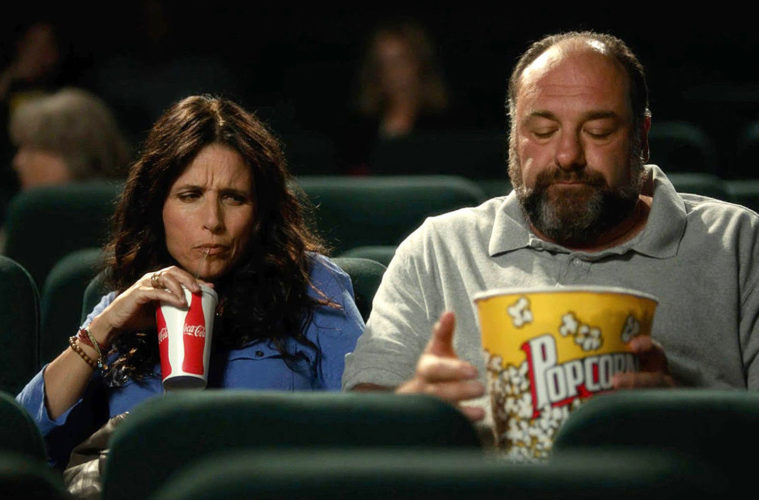 Arriving in a tiny theatrical release, A.C.O.D. is a hilarious, dark-tinged comedy, with Adam Scott perfectly cast as a successful restauranteur who was, as a kid, the subject of a psychological study (led by Jane Lynch) that became a best-seller. His divorced parents (Richard Jenkins and Catherine O’Hara) are a nightmare, and Scott does his best to protect his brother (Clark Duke) from their destructive vortex as he plans his wedding. Funny and painfully perceptive at times, the film also shows off a side of Atlanta, GA we rarely seen on screen. – John F.

In October of 2006, at a disastrous multiplex test screening in suburban New Jersey, All The Boys Love Mandy Lane left a mainstream audience shaken. The film had this misfortune of screening the day following a shooting that left six dead at an Amish school outside of Lancaster, PA and the audience apparently wasn’t in the mood for this brand of an intense horror. In the six years since, All The Boys Love Mandy Lane has become a heavily anticipated urban legend. I can report the film delivers what it sets out to and over half-a-decade later, I still remember it. (That that’s more than I can say for Mortal Instruments: City of Bones.) Director Jonathan Levine has since had a very diverse career including directing several notable comedies with The Wackness, 50/50 andWarm Bodies. With a hard edge including lots of blood and gore, All The Boys Love Mandy Lane is a stylish exercise, at times putting style above substance. The film has now finally arrived on Netflix, so you will have time to get in the proper mindset for what the film delivers — and it delivers in a big way. – John F.

The Act of Killing (Joshua Oppenheimer)

While Hollywood attempts to conjure the latest harrowing characters and situations in their offerings, one documentary this summer proves that nothing can beat the real thing, for Joshua Oppenheimer‘s document of real-life Indonesian serial killers is perhaps the most unforgettable experience one can have at the cinema this year. It’s a true testament to not only the film’s structure, but the bond our director created with these men that, without it, this — especially a devastating third act — could have easily been a superficial look at the events. Instead, its matter-of-fact nature will get under one’s skin and never let go. – Jordan R.

Following this fall’s 25th anniversary re-release of his classic Cinema Paradiso, director Giuseppe Tornatore has returned with the mystery thriller The Best Offer. Initially premiering at Berlin International Film Festival earlier this year, the Geoffrey Rush-led project is now on VOD. Following Rush as an art auctioneer who becomes obsessed with an extremely reclusive heiress who collects fine art (played by Sylvia Hoeks), it looks like an intriguing mystery, complete with music from Ennio Morricone and supporting turns by Jim Sturgess and Donald Sutherland. – Jordan R.

If you like your imported thrillers of the violent, crazy variety, then you’ve probably already taken a liking to Japanese filmmaker Takeshi Kitano. After debuting Outrage back in 2010, he’s returned for the follow-up, Beyond Outrage, tracking the police’s full-scale crackdown on organized crime and a yakuza battle that follows. The trailer features a mix of inventive killings, bloodshed, gunshots and a few laughs, and hints at a fun start to 2014.

Best known for his fly-by-the-seat-of-your-pants filmmaking technique that has slowly grown in popularity under the “mumblecore” moniker, Joe Swanberg‘s latest project boasts his most notable ensemble yet, with Olivia Wilde, Anna Kendrick, Jake Johnson and Ron Livingston in tow. And though this style of filmmaking can sometimes have a negative connotation, here is a project that simply works well under that guise. One starts to fall for these characters and their naturalistic dialogue and connect to their drama. With a relatable scale, the plot focuses on two friends that have never explored the possibility of a relationship together – even in just a physical sense – but have sexual tension following them like a fog. – Bill G.

There is a (debatable?) rule, in the field of film assessment, which states that a critic should be wary of reaching beyond the text or the frame of a given film when evaluating its merits. Sometimes the situation is black-and-white: if I watched Nicole Holofcener’s Enough Said after not eating a single food item for three days, and then wrote a review claiming that the movie was so excruciating that all I could do while watching it was fantasize about my next meal, I would probably have a hard time justifying that statement to a sane reader. However, there are situations in which some leeway is welcome, perhaps even necessary, and it’s simply impossible to watch, write, and/or think about Enough Said without being aware of the fact that James Gandolfini died months ago at the age of 51. – Danny K. (full review)

What could have been an exploitative look at an instance of police brutality and the unfathomable outcome wrought from fear and abuse of authority in an incident more complex than simple racial undertones might describe, writer/director Ryan Coogler’s Fruitvale Station decides instead to show how integral each life on this earth is to those he/she loves. It isn’t about vilifying the white murderer or turning the black victim into a hero; it’s about showing the life of a complicated man with faults and a checkered past finally understanding what matters above selfish wants and desires. And with some of the year’s best performances—Michael B. Jordan, Octavia Spencer, Melonie Diaz—we’re made to understand both the good and bad results of our actions and that things are never as cut and dry as we’d like to believe.

Yours truly has struggled to understand how much Lee Daniels, the eponymous director of / possessor in Lee Daniels’ The Butler, is playing his new film as a wink and nod. The true story of the White House’s black butler gaining a head-on view of the changing social landscape sounds, if only on paper, somewhat familiar — akin to the likes of The Help or Driving Miss Daisy, perhaps; what your older relatives especially enjoy — and notwithstanding the fact that action glides in this register for roughly half a total runtime, something altogether stranger seems to be happening at the margins. Even if Daniels and scribe Danny Strong (a fit, considering his credits on the HBO political movies Game Change and Recount) fall short of a historical picture with more to say about the genre and our conceptions of passing ages, the path which we follow comes tantalizingly close — a picture that emerges unexpectedly worthwhile, in equal part because of its palpable strengths and more peculiar flaws. – Nick N. (full review) It appears it was only a matter of time before author Lee Child – or Jim Grant to his parents — saw the sole protagonist of his life’s work on the big screen. Jack Reacher is the type of character audiences adore; one easily catered towards the sequel model paved by Tom Clancy‘s Jack Ryan if and when Tom Cruise finally gives up action flicks. An ex-Army Military Police Major who spent his childhood abroad before a stint at West Point led to thirteen years in the service, he now lives as a drifter wandering the States to find people in need or monsters to kill. He isn’t the cuddliest of men as a result, but that prickly stoicism endears him to folks wanting back alley justice doled out by someone heroically standing up for the innocent and amorally doing so without remorse or consequence. – Jared M. (full review)

Nostalghia further continued to showcase the maturity of Andrei Tarkovsky’s approach to memory, while also connecting heavily themes of Christianity. In many ways, Nostalghia is perhaps most similar to The Mirror because of its reflective nature and portrait of someone posing questions about creative freedom. The main reason Tarkovsky chose to make the film in Italy was because of previous attempts by studio executives and even government officials to censor his material. With Nostalghia, Tarkovsky bares his soul by combining iconic Italian landmarks with hypnotic cinematography that creates an amazing sense of spirituality. There is a 63-minute documentary Voyage in Time which documents the travels in Italy of the director himself. The film won several awards at Cannes but was not allowed to win the Palmes D’or by Soviet officials, further hardening Tarkovsky’s resolve never to return to his homeland. – Raffi A.

When he’s not starring in the latest Neill Blomkamp feature, Sharlto Copley has mostly taken the back seat in films such as The A-Team and The Europa Report, but after a villainous turn in last year’s Oldboy, he’ll get to lead his very own thriller. Directed by Gonzalo López-Gallego, who is thankfully coming back down to earth after Apollo 18, Open Grave features Copley as a man who wakes up amongst dead bodies and begins searching for answers. Now on VOD, it looks to be a dark, compelling thriller. – Jack C. No matter how nice it starts, when a film is part of the Midnight Madness sidebar at TIFF, something twisted is almost guaranteed to occur. After premiering A Horrible Way to Die just a year ago here, Adam Wingard‘s newest horror/thriller You’re Next lets us know right off the bat what we are in for. The bloody opening scene reveals the brutal killers donning animal masks and hints at the fun ahead. The victims in the first few minutes are neighbors of the Davison family, who are celebrating a 35-year-wedding anniversary and a reunion with their four children. Crispian Davison (A.J. Bowen) and his girlfriend Erin (Sharni Vinson) are the first to arrive as their parents (Rob Moran and Barbara Crampton) are spooked, hearing noises in the house. – Jordan R. (full review)