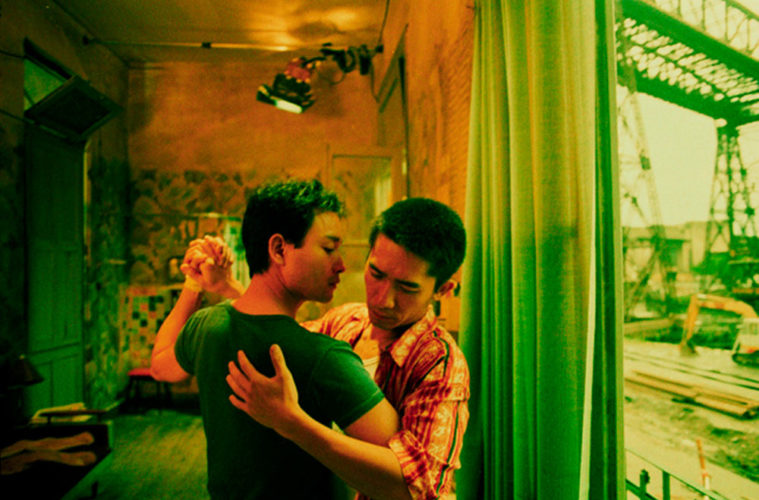 Late into Detroit, Kathryn Bigelow’s docudrama recounting the racial terrorism that took place at the Algiers hotel during the 1967 Detroit riots, one of the innocent, young black men who’s been tortured for nearly the entirety of the movie is given a chance at escape. The camera follows him in his moment of triumph as the man weaves around corners, back alleys, and under a fence into the hands of a white police officer. The camera zooms in, and upon seeing this battered man, the officer remarks, “Who could have done this?” It’s individually one of a number of risible, hammerhead moments in the film, which tells a story that’s extremely powerful on its own. It’s also a neat microcosm of a film that is constantly at war with itself, moving from gratuitous violence to toothless editorialization at a moment’s notice. – Michael S. (full review)

While, in some ways, the most complete romance in all of Wong’s filmography, Happy Together is also the most complex for how it follows up that rare consummation. The ricochet quality of its international scope is precisely matched by alternating affection, fury, and sadness, this mélange of place and passion compounded by a refreshingly brazen visual palette that casts the typically detail-oriented filmmaker into a dreamland of emotions that are equal parts elegant and raw. The Turtles-accompanied climax isn’t so bad, either. – Nick N.

If your first introduction to Olivier Assayas has been his Kristen Stewart-led films, there’s a wealth of fascinating offerings in his back catalogue to explore. One of the highlights is Irma Vep, his playful, meta reimagining of Day for Night (a nod that extends beyond the casting of Jean-Pierre Léaud. Led by Maggie Cheung, who plays herself, it follows a director’s remake of the silent classic Les vampires. – Jordan R.

One of the better dramas I saw at Sundance, this tale of separation was overlooked then and sadly seems to be getting no push from Netflix. Nonetheless, thankfully it will be easily viewable, and we highly recommend doing so. “This evocation of space and atmosphere is the greatest strength of My Happy Family. Despite tracking a narrative that could be dismissed as being too familiar – a middle-aged woman finally finds happiness – the film manages a level of specificity and honesty that makes it feel like a truly original story, rather than a riff on an archetype,” we said in our review. – Jordan R.

One need not have any background with faith to be enraptured in the philosophical questions at the center of Silence. Sure, having a theological familiarity with the soul-wrenching struggle of Sebastião Rodrigues (Andrew Garfield) will increase one’s appreciation, but Martin Scorsese’s adaptation of Shūsaku Endō’s novel succeeds as a lucid exploration for anyone who has been conflicted with a crucial decision. By meticulously placing us into the battle both internal (through voiceover) and external (how the basis of that voiceover wars with opposing views) raging through Rodrigues, Scorsese’s feat is his patient build-up to one of the most profound endings of his career. – Jordan R.

It often goes: the more peculiar the story, the more fascinating the documentary. In a new film, Voyeur, not only is the story being explored, but also the means by which it was crafted. Based on Gay Talese’s New Yorker article, which was controversial in its own right, Myles Kane and Josh Koury’s feature at the story of Gerald Foos, who used his Colorado motel in the 1960s to spy on his guests’ sexual activity, and Talese’s journalistic investigation. – Jordan R.