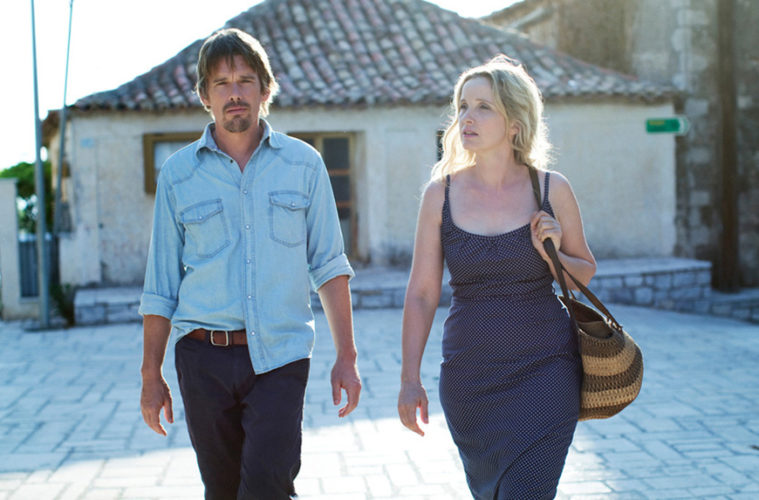 It took thirty-five years before proto-punk outfit Death’s guitarist, spiritualist, and uncompromising leader’s prophetic words came true, but the world finally came knocking. David Hackney didn’t have much time left on this earth when he brought the original United Sound Studios masters from Detroit to his brother and bandmate Bobby in Vermont, fully aware he’d never see the success he knew was trapped inside their music. After years of rejection from playing too fast, being a black rock group in the 70s, or picking an ominous name that couldn’t help but scare people away, the Hackney brothers’ legacy appeared over in the 80s when David moved home and Bobby and Dannis stayed in New England to form reggae group Lambsbread. Like all great things, however, genius is never lost forever. The importance of what this trio created is shown right at the beginning of Mark Christopher Covino and Jeff Howlett’s engaging documentary A Band Called Death. – Jared M. (full review)

The first two entries of the Before series offered the comfort of watching two people escape through each other; trading words of their anxieties, lost loves and general uncertainties of adulthood, making those both young and old nod their heads in some kind of agreement. Yet, with the third, that’s undeniably altered, as Céline and Jesse have now (spoiler alert) been together for nine years; their relationship now a circular movement of the same arguments and erotic tricks that, essentially, are what cynically leads to marriage being seen as just routine. But chalk it up to the Linklater–Hawke–Delpy trifecta to make this funny, gorgeous, and, even despite an arguably “ironic” happy ending, at least somewhat hopeful about love, no matter how tough it all may be. – Ethan V. (full review) With unfettered access throughout the pitch phase, rehearsals before the band gives their ok, and rehearsals afterwards for a Berkley Repertory Theatre, opening to the whirlwind of emotions that lead to a cast recording of “21 Guns,” a Grammy performance, and a Broadway pick-up at St. James Theatre in New York, we get to witness firsthand all the trials and tribulations that go into the creation of the Broadway Idiot musical. Or at least we would have if any presented themselves because this must have been one of the easiest germination periods for a Tony nominated show in history. Honestly, from Green Day’s stamp of approval to opening curtain, this thing was smooth sailing. – Jared M. (full review)

If one has been let down by M. Night Shyamalan with his recent efforts, this one won’t radically shift your view, but it’ll at least confirm he still has some fun left in him. Based on a story by the director and scripted by Brian Nelson (30 Days of Night, Hard Candy), it tells the story of five strangers trapped in the elevator. One of them is the devil. The premise is interesting enough, but the Dowdle brothers actually manage to actually craft a decent horror/thriller. Their direction is tight, always pushing the story along and building tension. The characters may be generic, but the claustrophobic nature of the elevator is captured with success. – Jordan R. No wonder the U.S. government isn’t afraid of shrinking the U.S. military forces in Afghanistan and Iraq. The real heavy lifters are JSOC, the Joint Special Operations Command, whose most prestigious arm is Seal Team Six. Through nearly extinct investigative journalism, reporter/producer Jeremy Scahill uncovers the unfortunate reality of our global operations against terrorism that simply isn’t covered by mainstream media. Many of us in the U.S. bury our heads in the sand when it comes to reports that sound like conspiracy theorists gone wild. But the dirty secret in Dirty Wars that Scahill actually utilizes much of what we publish openly to uncover the truth of our war on terror. – Bill G. (full review) Writer/director Ron Morales’ sophomore feature film Graceland—he’s had a decade-long career in the grip department on such films as Spider-Man 3, Jumper, and Nick and Norah’s Infinite Playlist—refuses to pander to its audience by padding run-time with subterfuge when it can tell its story unfiltered and streamlined instead. We don’t need extra exposition to learn the dynamic between Marlon Villar (Arnold Reyes) and Congressman Changho (Menggie Cobarrubias) because the details of their relationship necessary for the central kidnapping plot to work will be revealed during the course of the investigation. It is so refreshing to have a filmmaker pop us in the action and tread water until everything becomes clear because good storytelling doesn’t need transparent explanation. All those paying attention need are the tools to piece everything together. – Jared M. (full review)

A Hijacking revolves around the unraveling of the mystique of bravery and its risks and rewards. To be brave does not mean to be smart. When Danish cargo ship MV Rozen, with seven crewmembers, is hijacked by Somali pirates, an outside consultant is hired by the corporation that owns the boat to help in negotiations and tactics. Instead of following his specific advice, though, the CEO of the company wants to handle the direct negotiations instead of utilizing an outside negotiator. We learn early on that he runs a hard bargain when dealing with clients, but those matters aren’t life and death. While we see the tremendous toll and pressure that it places on the CEO, we also learn what it’s like to be part of that seven man crew as well. – Bill G. (full review)

One of the most intensely pleasurable films of the last decade is now available to stream in HD. What are the complaints? Martin McDonagh‘s miniature masterpiece revives the well-worn, worn-down subgenre of hitman angst with a lucid ear for language and keen eye for capturing the eponymous city, which goes stranger and more enveloping with each viewing of a film that, itself, becomes a richer experience every time through. Those who wished Tarantino stuck to the Reservoir Dogs / Pulp Fiction mold — or, even, always hoped Guy Ritchie was more than just well-styled flash — would be well-advised to sit down with the picture, though that comparison risks the suggestion of something familiar. In Bruges is purely, completely its own product. – Nick N. Maniac, director Franck Khalfoun’s first-person, 21st-century update on the ‘80s horror sleaze fest (an unlikely source of inspiration for Michael Sembello‘s radio hit) does not hesitate to stock griminess and visual discomfort to its own ends by way of a rarely broken, direct dive into the killer’s point-of-view. It’s a visual strategy and thematic gesture that rarely strikes more than one note — i.e. we’re being put in his shoes! — but for consistently instilling discomfort does Maniac, regardless, still hit said note with resonance. – Nick N. (full review)

Kim Ki-Duk’s Pietà may draw its title from a famous Michelangelo sculpture depicting the Virgin Mary embracing the body of Jesus Christ, but the movie itself is anything but sacred. Ki-duk, who won the Golden Lion at Venice for his new film, disrupts his quiet and meditative streak with a sordid tale of redemption and atonement that returns to the violent shock tactics of early work like The Isle. Any audience relief had at the merciful absence of fish-hooks will be short-lived, as Pietà delves deep into misery with its tale of Kang-do (Lee Jung-jin), a repugnant loan shark who takes grim pleasure in brutally maiming those who can’t reimburse him. – Nathan B. (full review) When watching a film made more than four decades ago, there is a tendency to think that some of the atmosphere and intensity might be lost. After all, horror films and thrillers these days try to push the envelop as much as they can. But walk into Wake in Fright unprepared and it will knock you out. CGI and action sequences can often become stale in just a few years time, but mood never loses its flavor. Set in the Australian Outback around the ‘70s, the film follows John Grant (Gary Bond), a forlorn teacher in a small outback township trying to make his way to Sydney when he gets sidetracked and stuck in the odd black hole of a locale called Bundanyabba. Colloquially known as “The Yabba,” the oddities of this town start to wear down our protagonist until it becomes a full blown nightmare of booze, guns, and depravity. – Bill G. (full review)

In Quentin Dupieux’s follow-up to his wacky Rubber, a film about a psychotic tire that uses telekinetic powers to blow people up, the French filmmaker maintains his unique blend of absurdity while balancing it out with a more heartfelt story. On its surface Wrong is a tale about a man whose loses his dog, but beyond that it’s a surreal tableaux full of abstract metaphors that will delight some and irritate others. It’s a style of filmmaking where everyday occurrences become bizarre abstractions of reality and characters behaviors are more reflections of ludicrous oddities. Yet for all the seemingly randomness of Wrong, there is a definite logic to everything despite being constantly unpredictable. – Raffi A. (full review)