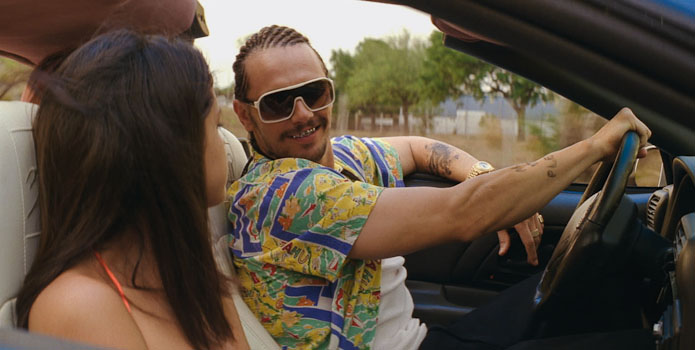 Toronto International Film Festival is going to get a little freaky this year, as Harmony Korine debuts his bizarre-looking party/crime film Spring Breakers and Brian De Palma lets loose another heated tale of lust with Passion. Following the announcement of both films this morning, we’ve got new looks today. First up, above one can see a new look at James Franco in the former film and below ones of Selena Gomez, Vanessa Hudgens and Heather Morris in the film about “four flat-broke co-eds whose spring fling in Florida turns into a booze, drug and violence-fuelled bacchanal.”

Following that, we’ve got new looks of Rachel McAdams and Noomi Rapace in Brian De Palma’s remake of Alain Corneau’s Crime d’amour. Passion follows Christine (McAdams), “an elegant, ice-cool blonde career woman who holds a senior position with a high-powered advertising agency; and her assistant Isabel (Rapace), a shy and reticent brunette.” As with a few other De Palma movies, sex gets in the way and things go downhill. Check out the photos below.