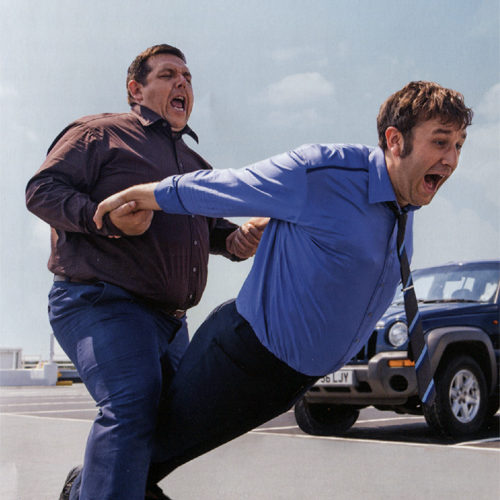 Over the summer, Nick Frost’s dance comedy Cuban Fury built its cast with both familiar and up-and-coming faces – first, Bridesmaids star Chris O’ Dowd got on board, and he was quickly followed by Rashida Jones & Ian McShane. Some new images and an updated synopsis were just released, giving a more thorough look at the plot and its characters. There’s no shortage of details on the project, but a few more couldn’t hurt.

Based on a script by Jon Brown and directed by James Griffiths, the film follows Frost, who plays a former salsa dance champion attempting a comeback decades after a rival ruined his career. Helping him on his journey are Jones, seen here as the love interest that inspires him to put his dancing shoes back on; McShane fills the role of a gruff dance instructor tasked with whipping the hero back into shape. O’Dowd and Olivia Colman also come into play, of course, but I’ll let the very colorful synopsis take over from here. See that and images, courtesy of Collider, below:

“1987: A 13 year old natural born dancer with fire in his heels and snakes in his hips is working himself up to reign over the UK Junior Salsa Championships.  But then… a freakish bullying incident on the mean streets of London robs him of his confidence, and our young hero finds his life diverted down a very different path.

Sot it is that 22 years later, an adult Bruce Garrett (Nick Frost) finds himself out-of-shape and unloved – trapped in a downward spiral of self-pity and repression.  Only Julia (Rashida Jones), his smart, funny, gorgeous, new American boss gives him reason to live.  But she’s untouchable.  Out of his league, so he imagines, with her perfect smile and perfect life.  Unknown to Bruce however, Julia has issues all of her own.  Luckily for him, she also has a secret passion… Then there’s Drew (Chris O’Dowd), his alpha male colleague and horny king-monkey of the office.  With Drew making no secret of his desire to get (his words) “all up inside Julia,” Bruce is forced into action…

And thus, Bruce is once again brought face-to-face with the darkest and most powerful of his inner demons.  Somehow, someway, and with a lot of handholding from loyal sister Sam (Olivia Colman) Bruce must learn how to unshackle his dancing beast, regain his long lost fury and claim the love of his life… and he’s going to do it all On The Dance Floor…”

The images aren’t nearly as revealing, but you do get a glimpse of Frost doing the forbidden dance with a sexy little number. See below: Cuban Fury opens on March 22nd in the UK and Ireland. A domestic release date has yet to be announced.

Are you a fan of Frost’s work? Do you think this film looks as funny as his previous fare?