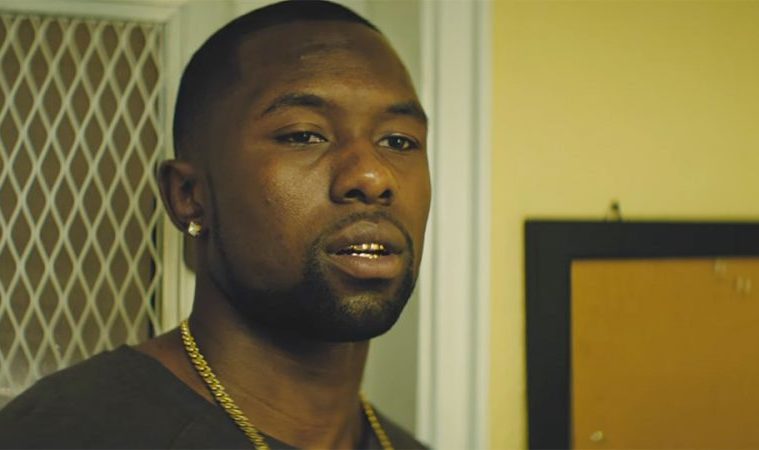 Barry Jenkins’ Moonlight is both extremely personal and universal in its themes of discovery and acceptance. The drama follows the life of a young boy named Chiron who deals with his sexuality in the streets of Miami and the culture of black masculinity that surrounds him. We jump a decade or so each step of the way in the triptych narrative and we are treated to how things have evolved for Chiron. Trevante Rhodes plays the third iteration of Chiron and it was my pleasure to sit down with him for a small roundtable interview. During the interview we touched on him actually losing weight for the role, how his track and field background helped him in acting, dealing with the taboos of the narrative, the wildness of playwright and director growing up blocks from each other, and much more.

The Film Stage: So, last night during the Q&A you mentioned that you were a track athlete. And you also mentioned how your specific third of the film shows how hyper-masculine Chiron has become. So, I assume you were in pretty good shape but did you have to bulk up for the role?

Trevante Rhodes: I had to lose 25 pounds for the role. Before shooting this I did a small stint on a TV show for Tyler Perry where I played a soldier. Then, afterwards, I was gifted enough to have a certain amount of money where I didn’t have to get a day job. So, what am I going to do? Lift weights, eat food, and watch movies. So when I booked this Barry [Jenkins] just asked if I could bring it back a bit. So I had three weeks to shed the weight. It was interesting because I thought I was actually kind of small.

Everyone wants to get bigger.

Yeah! And then when I saw myself on the screen I was so happy I lost that weight. I would have been an elephant.

Has your preparation as an athlete helped your transition into acting?

One million percent. I say it often but I feel like athletics and acting are so similar — especially track and field. Track and field is the most individualized team sport, and if you think about it, so is acting. You do your best to try to win the gold medal in your race so that the team as an entirety can win. You put forth your best performance so that the film is a great film.

The film is about a lot of taboos: the lack of masculinity in black culture, being a gay man in that culture, and more. Did you have to break through some of those barriers yourself to access this character and get in the mood?

Not really. I was just raised different. My mother is incredible and she has always emphasized loving everybody and everything for what it is and who they are. Love is literally the most important thing. As a people, we like to think that we have control over what happens. But we have zero control over anything. I was born dark skinned. You are born gay. You have no control over that. The only thing you can do is adapt and accept yourself. That’s how we can live our best lives.

So, no. I didn’t have any issue with the taboos because I hardly know them. I certainly see them and am aware of them. I grew up black and with these taboos around. Something I saw recently said that Hollywood is receiving this film so well because it was feminizing the black male image. That’s absurd. That’s almost making us a caricature of ourselves in the sense that this is a fake thing. “People aren’t really this way. There’s no such thing as a gay black man.” What? That’s like saying there’s no such thing as a black man. “It’s just fake. You’re not really black. Just wipe it off.” No. You’re born this way. It’s just so unique the way people think, man.

Is that the perspective you are hoping to bring to the world and to this culture?

I think, to me, this film, in its best form, is a way to develop an understanding as a people.

You were on set for six days?

That short length isn’t highly unusual for an independent film with a small budget. You mentioned you did TV work and I know they put in long, grueling hours. A lot of your scenes are outdoors and it’s really tough to shoot them at different times of the day. You can’t just keep shooting for an entire day if you are working on a night sequence.

Barry says that he doesn’t shoot what’s on the script, he shoots what’s in front of him. So a lot of the shots are about taking advantage of the things we have. The scene where Little is learning how to swim with Juan, Barry said that scene was supposed to be shot over an eight-hour period but they saw the storm coming and so Barry knew they’d only have like 90 minutes. It wasn’t improvised, but it was just the way it was. So yeah, there were a lot of night shoots. [Laughs]

The other question is how many different set-ups you shot with your fellow co-stars, because sometimes acting is individual but sometimes you have to act for the person you are playing against, even if the camera isn’t on you.

In terms of developing that relationship with Naomie [Harris] and André [Holland], it was all about trusting in your co-stars. Trusting that everyone knows that this space is very intimate but also very timely because we don’t have too much of it. I met Naomi literally ten minutes before we shot that scene. To be honest, it was kind of helpful because we didn’t have any time to get out of character. I hate to sound too actorly, but you really put on this other skin in a sense and it allows you to stay in it because you don’t have enough time to just go, “Oh, I have two days off? Cool. I’m going to put that suit over there and then live my true life.”

In the case of Andre, the characters were really just meeting for the first time. He was still Kevin but he’s a different incarnation of Kevin. He had accepted himself. And it’s funny because the relationship in the film with his character and mine are very similar to us in real life. I aspire to be like Andre. Chiron looks at Kevin as if he’s this person that knows who he is.

One day we were rehearsing in the hotel room and he got up to leave and he looks back. “Yo, I’m going to the store. You want anything?” This is the second day I met the guy. Like, you don’t have to do that. But that showed me his heart and I developed a love for him. The context was different but the love was still there.

I think of the three sections, Black has the most unique music. It starts with some Latin music for a Miami feel, and then it changes as he travels, too. Music seems to be a huge influence in Barry’s work. And even some of the sound design choices where we see someone there, maybe yelling, but nothing can be heard.

In regards to his character, there is so much going on and he is trying to internalize so much. He is getting so much vivid information. He’s seeing his mom, he’s listening to his mom, and her lips are moving but he can’t quite pay attention. Barry wanted the audience to feel just as disoriented as Chiron was during that moment.

As for the score, Nicholas Britell, our composer — Barry looks at Miami as this beautiful nightmare and wanted to show that in the music — so he has this orchestral score but throughout, chopping and screwing it. That brings out the yearning of music in a way. Whenever a rap song is chopped and screwed, you actually get to listen to the lyrics and hear the poetry. You feel the emotion because Chiron wasn’t someone that could verbalize it so much.

So I know you mentioned that Barry wanted to keep the other Chirons separate during the filming and even the lead-up. So when you first saw the film and finally saw the performances did that change how you viewed the character?

Not so much because he gave us the opportunity to read the script in its entirety so you knew what was coming. But yeah, it did shock me because I didn’t know how similar and fluid it would actually play out. It was jarring, specifically for me because when I saw Alex Hibbert who plays Little, if felt like it was a reincarnation of myself because barring some changes in the nose, that’s how I looked.  It was surreal. I don’t look anything like Ashton [Sanders], who plays the middle, but I also had that taller, gangly stage because I’ve been the same height since I was like 12 years old.

Knowing the history of Barry and playwright Tarell McCraney having completely different lives yet living so close together and then coming together for this, how crazy was it hearing what they wanted to do for this project?

Blocks from each other. It’s so wild. It’s just a magic trick. What’s the likelihood of two people who are very successful in their own right, from the same two square blocks, not know each other? Then they’re both the pride of the area. But it was so cool to see them discover how much they had in common. A similar mother situation. Walking the same streets. It really became cohesive in the film. I see so much of them both in the film. I owe them everything.

I’m curious about the relationship with the stepmother in the film and where you come at it as a character playing him later. Teresa (Janelle Monáe) seems like she’d be a great surrogate parent. That she would be reliable and yet we see Chiron embrace her at arm’s length. How does that relationship evolve for you?

I think, for me, he never wants to remove himself from his real mother.

He’s almost watching over her.

Yeah. From a distance but still, that’s your mom. You know? No matter what. You can hate her or whatever, but you still love her. Pushing too far in the direction of Teresa and bringing her in would kick his mother out. I’m thinking of colors. Mom is blue. Teresa is red. If you go completely over to the red, there’s no more blue. Purple is fine. Purple is beautiful because you get the balance. That’s how it works for me in Chiron’s mind. But towards the end, I think it was more of a technical thing. It would have been too much to have Teresa be there and take so much from what his relationship with his mother needed to be. We needed that resolve as an audience.

Moonlight is now in limited release and expands this weekend.