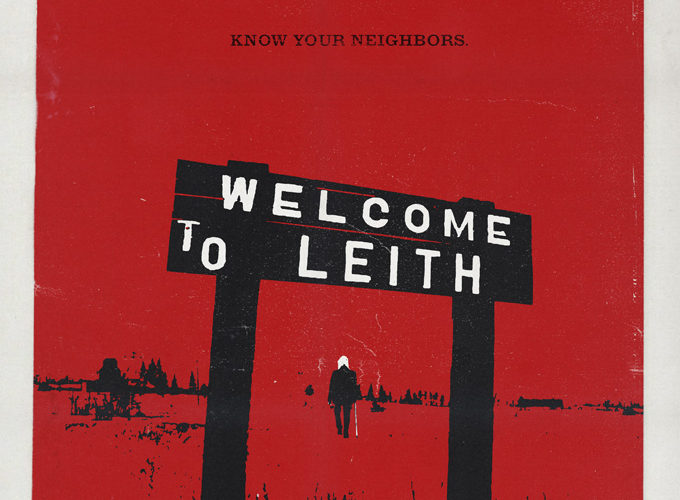 In what could also be described as a horror film, Welcome to Leith is a truly terrifying portrait of a small town of 24 residents that one day receives an unwelcome neighbor: a white supremacist interested in moving his people in to create their own Aryan hamlet. Both Craig Cobb and associate Kynan Dutton, as well as long-time town residents including mayor Ryan Schock provide access to filmmakers Michael Beach Nichols and Christopher K. Walker, who patiently wait for the saga to play out.

Included amongst the records presented to viewers, teased in the opening moments, is a kind of counter strike as Cobb and Dutton walk the streets of Leith, shotguns in hand, to intimidate the three-square mile community. This presents a challenge for Grant County and its tiny Sheriff’s department with only three deputies stationed some 18 miles from isolated Leith. The situation grows dire, especially for residents Lee and Heather Cook as the friction mounts. The Cooks have relocated to Leith from Oregon following the murder of their 17-year old daughter and have vowed to keep their family safe – they refuse to allow Cobb and Dutton to take over despite.

Leith is also home to the only African American resident in all of Grant County, Bobby Harper, a peaceful hardworking man whose naturally a barrier to the desired vision Cobb and his folks have for the town. With the goal of acquiring lots cheaply he deeds an abandoned building to Detroit’s National Socialist Movement Party. Coming to his defenses, they argue Cobb’s rights are trampled on, while the Sheriff’s department is only able to keep the peace as best it can.

Relying upon archival footage and on-the-ground cinéma vérité, Welcome to Leith is a fascinating behind-the-headlines examples of balanced long-form journalism. While the residents of Leith appear to have come before that of Cobb and Dutton (they appear in the film’s later passages following a court case for harassment) filmmakers Nichols and Walker paint a fascinating portrait of a town fighting not only against a perception but a physical threat.

Teasing what is to follow in the film’s disorienting opening moments, Welcome to Leith remains level-headed throughout despite some questionable narrative shifts, including cross-cutting between residents who hope they will never hear from Cobb again wondering where he is. Despite an interview with the Southern Poverty Law Center’s Ryan Lenz, Nicholas and Walker’s reporting is original, although given the resolution of the story is known, the immediacy of the narrative is perhaps a bit too mediated with editing that’s heavy handed at times.

In spite of minor stylistic reservations, the presence of the filmmakers is kept off screen with brief addresses in some passages. They honor the trust earned in the community with a straight-forward portrait, despite some passages that intensify and compress what is no doubt a slow boil. It’s hard to document psychological menace even as the legacy of Cobb remains in town (the NSM still owns the lot deeded to them by Cobb). Welcome to Leith delivers a psychological horror film, one more compelling and politically relevant than your average fiction offering in the genre. It’s a critical portrait of a place that on one hand seems to lack identity, but certainly not character.

Welcome to Leith screened at the Montclair Film Festival and opens on September 11th.