Montclair Review: ‘The Misogynists’ is ‘In The Company of Men’ for the MAGA Era 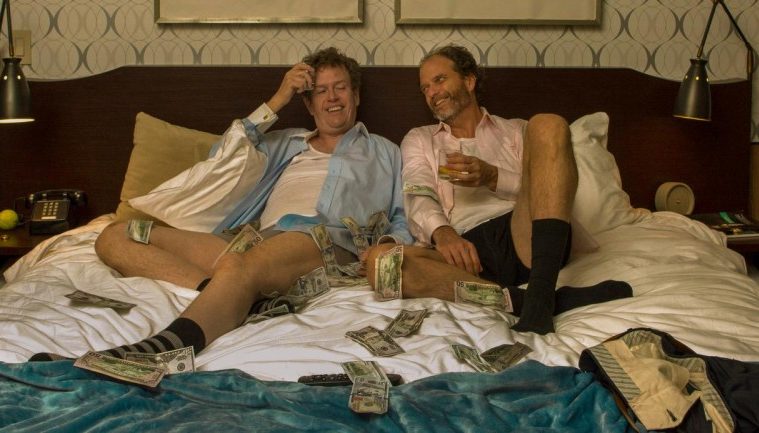 Largely set in a hotel room on election night 2016, Onur Tukel’s The Misogynists is a nasty piece of business. Perhaps the director’s most no holds barred picture yet, it expresses the anxieties and political division of the Trump era. While narrative and documentary filmmakers are still grappling with the post-truth era in which the country is ruled by a kleptocracy, Tukel, like Tyler Perry, had the major advantage of prolificness. The eccentric and eclectic filmmaker releases at least a film a year, in addition to writing and starring in his friend’s films, including Infinity Baby and Booger Red.

The set-up here is simple: two colleagues get together for a coke- and tequila-fueled bender in a luxury hotel room that Cameron (Dylan Baker at his creepiest since Happiness) has been living in since his divorce. He’s joined by a frequent Tukel collaborator, here credited as Lou Jay Taylor (likely for professional reasons), whose character Baxter is a family man, with a wife that is horrified by the next four years. When her daughter asks her if she can become President one day, she’s unsure what to tell her in the film’s sharp and hilarious open scene.

Cameron and Baxter’s adventures dive into the deeply depraved and offensive, particularly when it comes to “playing a round of golf” in the film’s crudest sequences. Most of the time they banter about politics. Cameron is delighted Trump has won, spouting off a theory that Hillary would have opened the door to woman ruling the world. He backs this up with the theory that the Bush daughters were not voting for Trump. Baxter is more of a political moderate, occasionally pushing back against his crude boss and friend despite both obtaining leverage on each other. No one will accuse the title of false advertising; this is Neil LaBute’s In the Company of Men set amongst the backdrop of MAGA.

The banter is interrupted by co-workers, a hotel employee, and an annoyed African American neighbor (and her emasculated white South African husband) who are kept up by the all night partying. Whereas Turkel’s other pictures–often starring himself, including Apple Sauce, Summer of Blood, and Abbie Singer Songwriter– took backroads featuring long rants, he’s finally honed his energies into a definitive political statement. The film’s third act does briefly run off the rails with an ending that is either entirely warranted or a simplistic cop-out, but the film is one of the first features to the market to deal explicitly with the anxieties of election night in which more than half the nation found itself fearful and in mourning.

In 2011, Kenneth Lonergan’s post-9/11 New York drama Margaret was unearthed six years after its production, arriving as a fascinating relic of anxieties of the era. In the years to come, I will point to The Square and The Misogynists to explain the kind of populism, nationalism, and toxic masculinity that led to Brexit, Trump, and #MeToo.

The Misogynists screened at the Montclair Film Festival and opens on February 14, 2020.