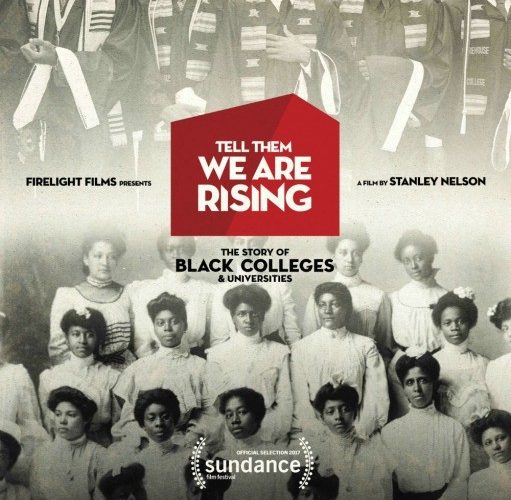 Montclair Review: ‘Tell Them We Are Rising’ is a Sweeping, Emotionally-Charged Documentary

The dilemma of a film like Stanley Nelson’s sweeping and emotionally-charged new documentary Tell Them We Are Rising: The Story of Historically Black Colleges and Universities is that any one of its rich stories — the founding of any HBCU, the role they’ve played in the civil rights era, the role they play now as safe spaces for students of color arriving from high schools without students or teachers of color, the individual narratives of students that had attended or are attending them presently, the challenges faced by HBCUs today — could be its own stand-alone feature film. With that said, Tell Them We Are Rising is superbly crafted and in only 83 minutes provides an introduction to the history of HBCUs in America with interviews from students currently attending thriving schools like Spelman, Morehouse, and Howard.

Along the way, Nelson captures a certain irony as students struggle to liberate their schools from the kind of victorian control and ivory tower mentality that didn’t support the needs of students. Starved of knowledge at the end of the Civil War, HBCUs first seemed to grow out of a necessity to educate rural black teachers, many of which were not qualified and only taught what they knew. Years later the conditions barely improved, as shown in incredible footage captured on film by Howard Law Dean Charles Hamilton Houston and Thurgood Marshall.

Starting first as vocational institutions, such as the Hampton Institute, they provided training for recently freed men, under the watchful eye of white presidents who controlled the type of knowledge transferred. Booker T Washington arrives at Hampton and impresses its principal, former Union General Samuel Chapman Armstrong. He’s recommended to lead the Tuskegee Institute, a teaching college, and finds himself the subject of W.E.B. Du Bois’ criticism for limiting the opportunities of black students to study in classical academic programs. Schools such as Du Bois alma mater Fisk would later restrict social activities, keeping students oppressed in a regimented schedules.

Du Bois, later educated at Harvard, becomes a pioneer for liberation at Fisk, inspiring an uprising that would lead to the resignation of its white president and set the stage for a golden age of liberated knowledge creation which became essential in the fight to desegregate schools and lunch counters. Knowledge and solutions produced by Howard Law Dean Houston would lay the ground work for desegregation as they documented in motion pictures how separate was by no means equal in the deep south.

Equality also proves to be a struggle for the students of Baton Rouge’s Southern University as continued protests over funding led to the deaths of two students during a campus siege based upon bad information provided to the police. Southern’s African American President and board were beholden to funding from white lawmakers, including Governor Edwin Edwards who contends to this very day the students were wrong to occupy an administration building.

Tell Them We Are Rising is an illuminating story that gives a broad overview as to why HBCUs matter. They have always provided a safe space free from the racism faced outside of their gates and Nelson doesn’t shy away from the most abhorrent of images and interviews from our national dark history. Films such as this are essential, telling a deeper truth and inspiring further research into these stories in a time in which HBCUs are held up as a model of school choice by those like Secretary of Education Betsy DeVos, who simply have no clue about their complex history.

An ambitious undertaking with remarkable archival material, interviews with historians, students, administrators, and officials, the film ties together with a straightforward oral history of HBCUs and their role in shaping American history. Tell Them We Are Rising is another vital feature from master documentarian Stanley Nelson (who last gave us The Black Panthers: Vanguard of a Revolution), exploring American stories that are not told nearly as often or with the depth and complexity they should be.

Tell Them We Are Rising: The Story of Historically Black Colleges and Universities screened at the Montclair Film Festival and will premiere on PBS in February 2018 following a national screening tour in the fall.