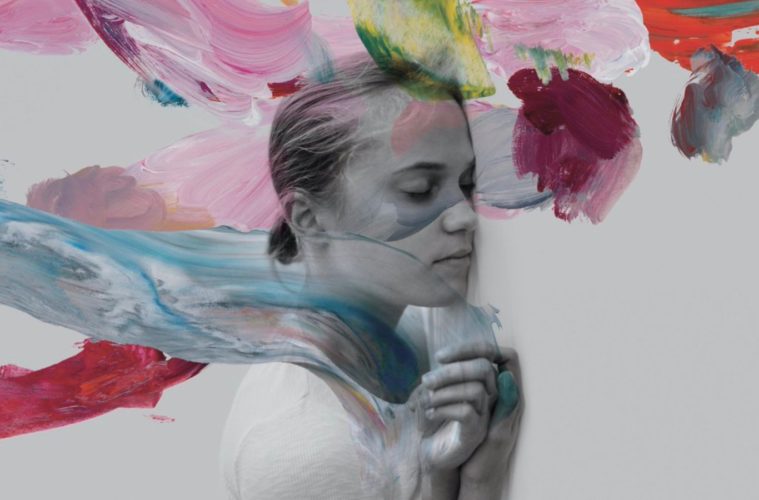 Through seven albums, the Cincinnati-born band The National have evoked images tailor-made for the big screen: glowing young ruffians walking around half awake in a fake empire; reminiscing about being raised up in the arms of cheerleaders; being carried to Ohio in a swarm of bees, and even eating brains. For their eighth LP, I Am Easy to Find, they are now more completely embracing the visual form.

While they’ve previously been the subject of their own films (Mistaken for Strangers and A Skin, A Night), the band has teamed with Mike Mills for a 24-minute film, also titled I Am Easy to Find even as it’s a work that stands entirely on its own with the director’s signature voice. Shot in black-and-white and starring Alicia Vikander, the film–which captures an entire life in 164 moments–made its U.S. premiere this week at “A Special Evening with The National” at New York City’s Beacon Theatre. Following the screening, frontman Matt Berninger, Aaron Dessner, and Mills were joined by special moderator Julien Baker to discuss the project before the band played the album in full (though out of order) for the first time publicly, as well as a few older favorites.

Far more than just a side project to drum up attention for the album–which arrives on May 17 alongside the film–Mills actually had a profound effect on the making of their new music. Initially talking to the band about making a music video, a more ambitious idea was sparked in the mind of the director. As a proof of concept, he first presented the band a five-minute cut featuring footage of a black & white “artsy fartsy French film” (Berninger’s words, and the name of which Mills wouldn’t reveal) that layered The National’s new music over it. When it was clear the idea was working, Mills took early arrangements of unfinished songs and went ahead to shoot the film. When it was wrapped, the band was about halfway done with their album and upon seeing the film, it helped inspire new ideas for the second half of the album’s production, so much so that two songs were borne out of the Mills-written short. As Berninger says “they were stewed in the same pot,” and resulted in two congruous projects that spoke to each other in beautiful ways.

Built on the fragmented style of memory-filled detours found in Beginners and 20th Century Women, Mills charts the entire life of Vikander’s nameless character through these fleeting 164 moments. As a handful of songs from The National play throughout, a near-constant stream of text pops up with each new scene to narrate the life of the character: “She has her first kiss, Her father dies,” etc. With its pristine cinematography and checkboxes of major life events,  it could pass during its first moments as a perfectly fine commercial for the latest medical treatment. Yet as it evolves, Mills injects his story with an emotionally piercing honesty that gradually builds to become something immensely affecting.

As we see her grow up –whether she’s two or elderly≠–Vikander’s appearance rarely wavers. This decision of a fixed physical presence suggests the idea of how throughout life, it’s easy to cement a youthful self-image in one’s mind and as Berninger describes, “All these things being embodied by the same sort of soul, by the same image really spoke to us as in a way we think of ourselves in an identity.” There’s birth, playfulness, first kisses, boyfriends, heartbreak, school, work, marriage, children, infidelity, friendships, and beyond. Not unlike Terrence Malick’s opus The Tree of Life, Mills tackles these ideas with an impressively disarming specificity as such that moments will ring true to any viewer. He also leaves room to fill in one’s own memories in colorful, single-tone frames that relay the passing of time and toss out reminders of the financial, political, and terror crises.

Perhaps the most touching aspect is the cyclical depiction of life. She moves out of the house, but still calls her father on Sunday, then decades later, she rings her son on the same day. What could come off treacly is handled with both an overt directness in the script and a tenderness in the imagery that culminates into something both recognizable and overwhelming. “Her husband is different than she thought,” writes Mills as we see the honesty of a love made vulnerable. Most remarkable of all is how the project does indeed stand on its own. Being a fan of the band surely helps, but Mills set out to tell a fully-formed story that is devastatingly universal in its truths about life. In miraculous fashion, he’s able to synthesize the emotional highs of his previous film, the exuberantly alive 20th Century Women, into short-form, and still have viewers come away with similar feelings about life’s entire emotional spectrum.

During the Q&A, Berninger revealed that Mills even went into the studio when they were recording the album, becoming a creative director of sorts, something that was certainly seen during the band’s performance of their new album–as well as the event’s poster. As each song began, projected in text behind the band was the song title with what was clearly a Mills-selected color frame. For select songs, congruous text was displayed that differed from the lyrics, some pulled from the film and others presenting intriguing ideas connecting with what Berninger was singing.

Thanks to the location being nearby Brooklyn Youth Choir’s home base, they joined the stage and the band was able to debut three songs live they are featured on: Her Father In The Pool, Dust Swirls In Strange Light, and Underwater. Overall, the new album felt like a satisfying mix between the sublimely low-key Trouble Will Find Me (noticeably in the Patti Smith- and Robert Mapplethorpe-inspired Roman Holiday, Quiet Light, and Light Years) and the more poppy High Violet (particularly Where Is Her Head and Rylan). There was also the peculiarly lovely encore opener Not in Kansas, a ballad which contains lyrics about Annette Bening (someone’s been catching up on Mills’ films), alt-right opium going viral, and punching Nazis.

With the album clocking in at over an hour (the longest in their discography), the live I Am Easy to Find comes across as a rather sprawling work as the band reaches for new heights through the use of choral arrangements and a new vocal perspective in their use of female artists, including Sharon Van Etten, Lisa Hannigan, Mina Tindle, and Kate Stables (the latter two which performed on stage).

During the Q&A, one audience member asked the band why they perhaps ignore their earlier albums. “They look zitty prom pictures,” added Berninger, refuting, “None of us are ashamed of those records at all. It was where we first figured out how to make sounds together.” Matched with the beauty of Mike Mills’ film, The National’s new music shows a clear maturation for the band as they turn two decades old, while still carrying the Alligator– and Boxer–fueled spark that led to their breakthrough. Yes, they are conveyed with more lyrical grace and musical refinement, but these are still sad songs for dirty lovers in all their magnificent glory.

I Am Easy to Find is out May 17 via 4AD. See the schedule here for worldwide preview screenings of the film.