Materna Review: A Viscerally Immersive Yet Broad Look at Womanhood 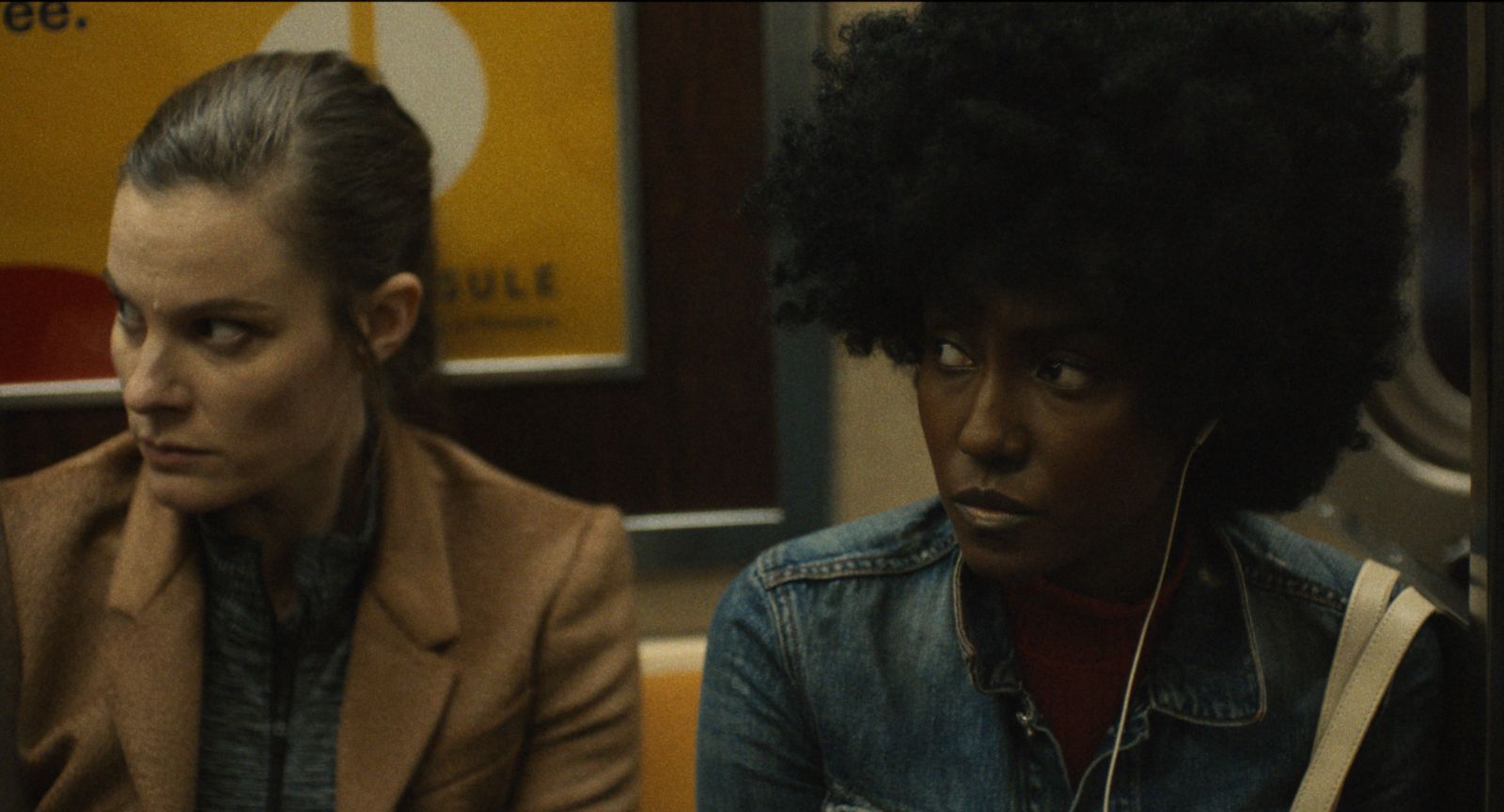 Materna opens with hazy close-ups of four women on the New York subway, all distracted and on edge. As we’ll come to learn, that’s partly from events in each of their personal lives. But it’s also because a man on the subway is harassing them, venting his frustrations, and teetering ever closer to violence. From here, director David Gutnik flashes back to show us, one-by-one, what led each woman to where they are now, sitting together on the subway as strangers, united only by the man’s harassment.

Gutnik’s anthology tells stories of how each handles struggles related to motherhood. Jean (Kate Lyn Sheil) is a hermit who is developing some sort of sexually charged VR technology (we meet her writhing around on the floor in a full-body VR suit). Over the phone her mother constantly pesters her to freeze her eggs; meanwhile, Jean is secretly working out what to do about an unwanted pregnancy. Mona (Jade Eshete) and Perizad (Assol Abdullina) are also dealing with overbearing matriarchs: Mona is an actress whose Jehovah’s Witness mother wants her to rejoin the congregation; Perizad returns home to Kyrgyzstan where she clashes with mother and grandmother over the mysterious death of her uncle.

Ruth (Lindsay Burge) is an exception as the only mother in this group. She’s a rich, conservative woman angry at her son’s school for excluding him for using a homophobic slur. She argues with her liberal brother Gabe (Rory Culkin) over how to educate her son Jared (Jake Katzman) on social justice.

There’s no doubt that Materna is beautifully shot and sound-designed, helping to immerse us in the experiences of Jean, Mona, Ruth, and Perizad. Gutnik viscerally communicates how the city feels harsh and alienating to these lonely women; along with sound designer Peter Albrechtsen, he uses harsh aural cuts that take us from relative quiet to the deafening din of city noise in-between scenes. New York is portrayed as bustling and inviting at times, cold and unkind at others; Materna cleanly fits into the latter category. It’s a viscerally immersive experience.

But with so little screentime to tell these women’s individual stories, Gutnik and co-writers Eshete and Abdullina fall back on oversimplified characterization. Visual and aural techniques get us inside their heads, but once present there’s not much to explore. There’s little to take away from Jean’s story besides the fact that women are pressured to be mothers, about which most viewers seeking an indie concerning motherhood will already be well aware. Sheil’s purposefully opaque performance might have worked in a more nuanced work, but because Materna never characterizes Jean beyond her relationship to motherhood, she just reads as blank.

Ruth’s section is similarly lacking in nuance, but even more egregious as it veers into comic stereotypes. The standout here is Culkin playing Ruth’s brother Gabe, who is really—and perhaps unwisely, given the central thesis—the protagonist of his segment. He’s sensitive and liberal-minded––clearly the film’s intended audience––in contrast to Ruth, who believes teaching her son about the history of slavery and racial discrimination is equivalent to telling him he’s a terrible person for being white. Gabe and Ruth are ultimately nothing more than avatars for opposing political viewpoints. Presumably Gutnik and the screenwriters ally themselves with Gabe, and thus make the mistake of villainizing Ruth rather than try to understand her. It gets as cartoonish as her having a dog called Mariah Carey, whose name she calls in a high-pitched frenzy during dinner.

Mona’s and Perizad’s stories are a little different, as (per a Phoenix Journal interview with Gutnik) they’re based on the experiences of the actress-screenwriters. These stories are accordingly less broad, but also weirdly lacking in context. Mona’s conflict is her struggle to nail an important audition monologue while she’s also dealing with the disapproval of her estranged mother—it gains specificity because Mona is an ex-Jehovah’s Witness and her mother is trying to pull her back into the religion. But that element is left unexplored; you could extract it and Mona’s story would still make sense. We learn little about how the specific experience of being a Jehovah’s Witness has shaped Mona’s relationship with her mother. The film is so intent on painting broad portraits of “different categories of woman” that it holds back on letting its characters be individuals.

To a lesser extent, the same is true of Perizad’s part, in which she takes a trip home to Kyrgyzstan. Its locale is intriguingly distinct. And yet—again—Materna focuses on the more familiar tale of family grieving at its center at the expense of almost everything else, including much exploration of Perizad’s specific national identity. This story is heaviest of all, and thus the one that suffers most from a constant self-seriousness—there’s not a laugh or a smile to be found.

It’s tempting to blame the broadness of Materna on the short runtimes of each segment, Gutnik and his screenwriters having little time to establish and explore each character’s identity. Something like Kelly Reichardt’s Certain Women––which brilliantly uses short-form storytelling to invite us into the lives of three fully fleshed-out women, each dealing with distinct problems––makes a great case for anthology film, presenting three tales that seem unrelated but subtly build on one another. It’s “about women” without ever falling into the trap of making generalizations on womanhood. Materna isn’t so successful. I left wondering what connected these women aside from their gender and what I learned from seeing their stories placed side-by-side. I drew a blank.

Materna opens in NY/LA theaters on August 6 and arrives digitally on August 10.