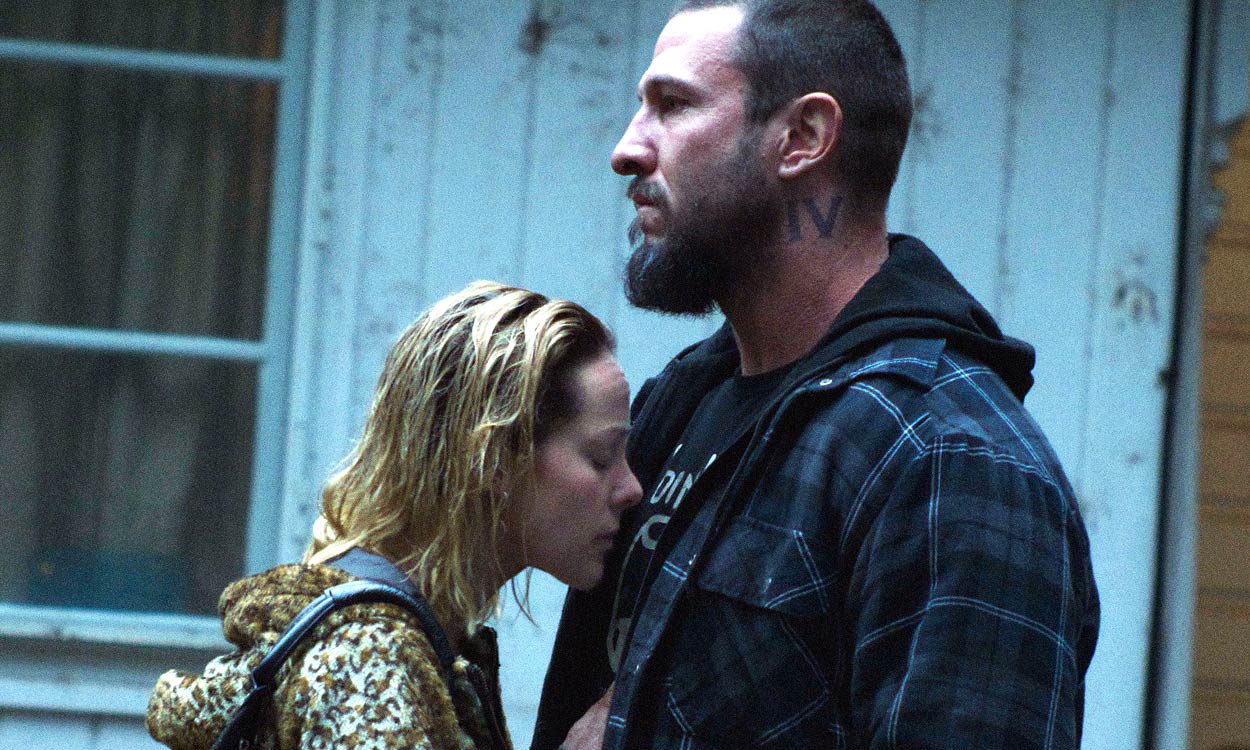 They had a plan. Wayland (Pablo Schreiber) would make as much money as he could running drugs for his local motorcycle club until he and high school sweetheart Dolores (Jena Malone) had enough to drive to Los Angeles and make their dreams come true. An undercover police officer changed all that, though. Instead of watching the sunrise over the Pacific together, Wayland found himself in jail for fifteen years while Dolores sought to make do on her own en route to having three kids from three different fathers. That they would ever think a reunion could reclaim the spark of their youth is a fantasy in and of itself, yet seeing each other after so much time has them believing their long-lost happy ending might remain possible.

Debut writer-director Sabrina Doyle may not have grown up in working-class Oregon, but her own self-proclaimed existence as an outsider in England surely helped her understand what it means to have nothing but the family with which you surround yourself. It’s not always fun and certainly not without it trials and tribulations, but there is something to finding an identity amongst such futility that resonates no matter where you’re from. Dolores and Wayland had each other, but also their respective communities of swimming and motorcycles—they were kids, after all. She had to let hers go when she got pregnant. His was all he had left considering his stint became a duty once he was asked to snitch. Dreams about “more” often die fastest.

Thus Lorelei is nothing if not a story about redemption. There are the external things like a parole officer giving him one freebie favor, a pastor (Trish Egan’s Gail) offering a place to stay, and a cousin (Dana Millican’s Violet) finding a line on work, but the important steps come from within and whether you’re willing to allow yourself that second chance. It’s not an easy thing to do, especially when you’re in the positions Wayland and Dolores find themselves. She can’t just add him into her life and pretend as though he’s always been there to help parent kids already seeking a way out. And he can’t erase prison’s mark on his soul.

Credit Doyle for not letting this thing get out of hand as far as forgetting who these people are underneath their surfaces. A lot of their real counterparts’ problems stem from how outsiders devalue their lives, so they certainly don’t need another work diminishing their worth for some sentimental fairy tale or hard-knock slip back into oblivion. Don’t therefore expect Dolores and Wayland to get married and buy a white-picket fence—or for the bleak alternative of her getting pregnant yet again right before he finds himself back behind bars. These two may have the odds stacked against them tenfold, but they aren’t stupid. They know the consequences of their actions affect more than themselves now. And those who love them aren’t here to exploit their desperation.

That doesn’t mean Wayland’s best friend, Kurt (Ryan Findley), is a good influence. He’s just not going to place the man who quite literally saved his life in a position to make him do it again. It also doesn’t mean that Pastor Gail is going to breakthrough and convert him into a God-fearing parishioner. That’s not why she does what she does, and her refusal to pretend it is becomes the only reason he’d ever actually willingly ask for her help in the first place. And don’t think that Dolores will suddenly become his angel savior—her “prison” isn’t the same as his by any stretch of the imagination, but to say she hasn’t lost something too is a disingenuous (and frankly misogynistic) misunderstanding of their complex situations.

Them coming together again can still be their salvation, though. He’s been alone for fifteen years because of a selfish act committed as a kid. She hasn’t had a moment to herself for that time because of her own. Wayland sees her family as a means towards purpose. Dolores sees him as a means towards peace. So it’s easy for him to see the big picture and defend her kids when he hasn’t been there every waking minute of their young lives. And it’s easy for her to see his presence as that of a babysitter as much as a lover. He’s the one who ruined their communal future. Now maybe he can be the one that lets her get a bit of it back.

Expect some emotional fireworks along the journey because what they each need from each other isn’t actually each other. Malone is great as a single mother reaching the end of her rope after manufacturing a smile for years. And Schreiber is even better as a man who’s had to learn the hard way that the brotherhood he thought he had wasn’t real. They’re both running into a wall in their sleep because they keep trying to reach their destination together without fully recognizing that’s what got them here in the first place. Though their paths can remain parallel, there will need to be some distance for success. Dolores must find herself on her own. Wayland must do the same with a family that means more than blind loyalty.

The kids are asked to deliver memorable performances, too, as a result. We need them to be more than symbols. The Iron Cross tattoo on Wayland’s neck isn’t for decoration, but Dodger (Chancellor Perry) can’t solely be “Black” and serve his purpose as a pathway forward. The ex-con’s macho persona can’t also reduce Demin’s (Parker Pascoe-Sheppard) decision to wear dresses to a clichéd avenue towards empathy. They must be real kids alongside the rebellious Peri (Amelia Borgerding). They must be more than the superficial attributes a fifteen-years-younger Wayland would have written off sight unseen—at the end of the day these children’s dreams have become his and Dolores’ mission. Only through their acceptance will the adults know if their actions are the correct ones. Being loved is redemption enough.