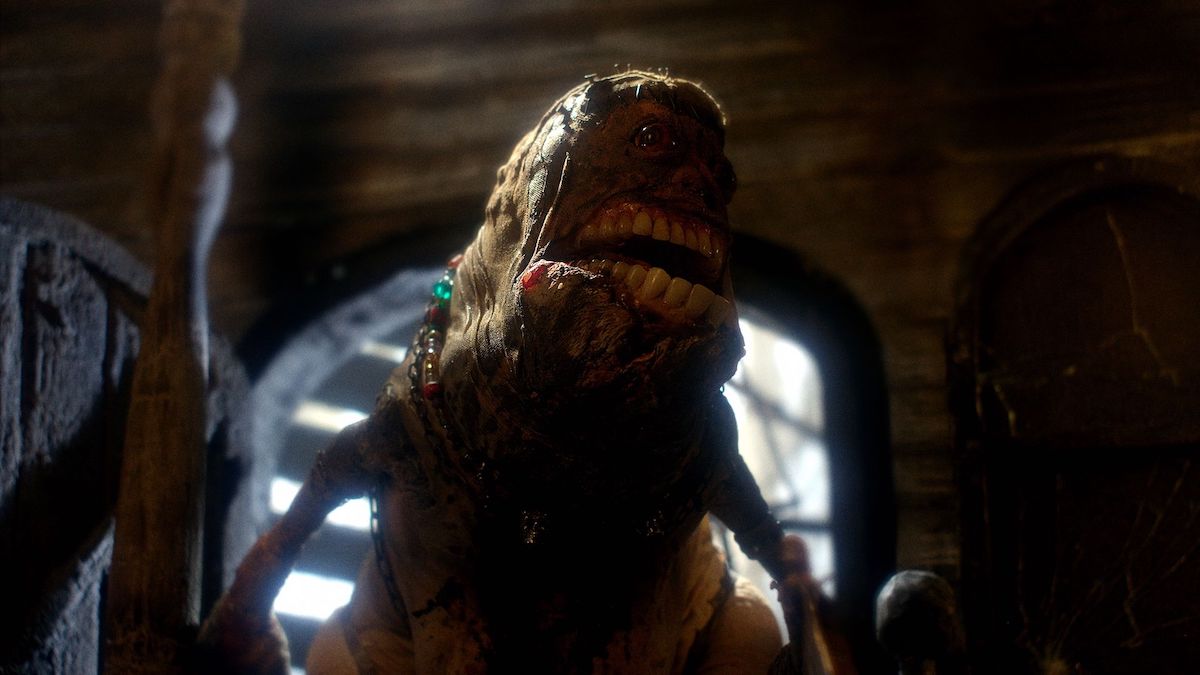 In Mad God, a character called “The Last Man” (played by the great Repo Man director Alex Cox) runs a laboratory sending miniature explorers into the bowels of a layered Dantean hell that might be a reflection of his own psyche––or more likely still: that of the filmmaker. The man in question is Phil Tippett, a legendary Hollywood special effects guru, two-time Oscar winner, and Ray Harryhausen disciple whose eye-watering résumé reads like a highlight reel of 21st-century pop culture ephemera: designing the Cantina masks, AT-ATs, and Jabba the Hutt for George Lucas; being credited as “Dinosaur Supervisor” on Jurassic Park; and animating everything from the holochess set on the Millennium Falcon to the ED-209 in Robocop and the swarming hoards of bugs in Starship Troopers. What a life.

In and out of production for decades, Mad God has existed, at least in some capacity, for a great portion of that life. Some of its opening sections were created around the time that Tippett was working with Paul Verhoeven on Robocop (1987), but he had the project shelved after seeing the photorealistic VFX on Jurassic Park a few years later––a watershed moment Tippett believed would consign stop-motion to, at best, a hobbyist’s endeavor and, at worst, total extinction. For a long time he was right, but buoyed by companies like Laika and Aardman, the medium had a resurgence in the mid naughts, around the same time an animator at Tippett’s studio came across Mad God and convinced him it was time the project returned to life. It has taken on a near-mythical status amongst enthusiasts, but only now—after years of sweat, breakdowns, hard labor, and inventive funding—is it finally seeing the light of day.

So what, exactly, to make of it all? The film opens on an image of some portent: a structure reminiscent of Brueghel’s winding tower of Babel (Tippett has cited dutch painter Hieronymus Bosch as a direct influence). Quickly switching to dystopian wasteland, the story largely follows a series of small steampunky miners who are sent below the surface one-by-one. On their travels they bear witness to, amongst many other obscenities, a group of demons jerking off a minotaur; cockroaches with human skulls for heads drinking tea and playing cards; and a towering line of giants being fried in electric chairs as they endlessly evacuate themselves into the mouth of some other god-forsaken thing. The world is at various times an industrial nightmare, a psychedelic C.S. Lewis mushroom garden, a scene from a torture movie, and a pseudo-WW1 battlefield. If there is an arc, it involves those unfortunate explorers being harvested by psychotic surgeons who relieve them of a strange cargo that is then offered as a sacrifice to a nightmarish alchemist who might be the devil—or something else.

For an apt description of Mad God we can look to Tippett himself, who once described the film as “everything but the kitchen sink that I’ve been thinking about for the last 60 years, all rolled into one.” He’s not far wrong. It is wildly entertaining, full of scatological filth and who knows how many other fluids, but only in fits and spurts, and I feel it may be a victim of its own stunted growth pattern. (Having gone into production just a few years after the release of the Nintendo Entertainment System, Mad God can be forgiven for resembling the last twenty years of post-apocalyptic themed video-game aesthetics.) In this and many other ways, it is surely best savored as a rediscovered gem.

Either way, Tippett’s endless madcap ideas and still-singular idiosyncratic designs are more than worth the ticket price, even if the film overstays its welcome a little; though even as it veers into repetition, Tippett still saves the best until last. With zero dialogue and only a rolling parchment of text to begin with, there is also little plot to cling to. For better and worse it carries the scars of that bizarre production—a film clearly stitched together over so many eras and through so many hands. With shifts in styles, tones, and image clarity, and a glaring back and forth between animation and human performance, the experience is nothing if not jarring. The film is in essence a Frankenstein’s monster. That should be taken as a compliment. It is a unique achievement; a mad opus from one of American cinema’s liveliest minds.