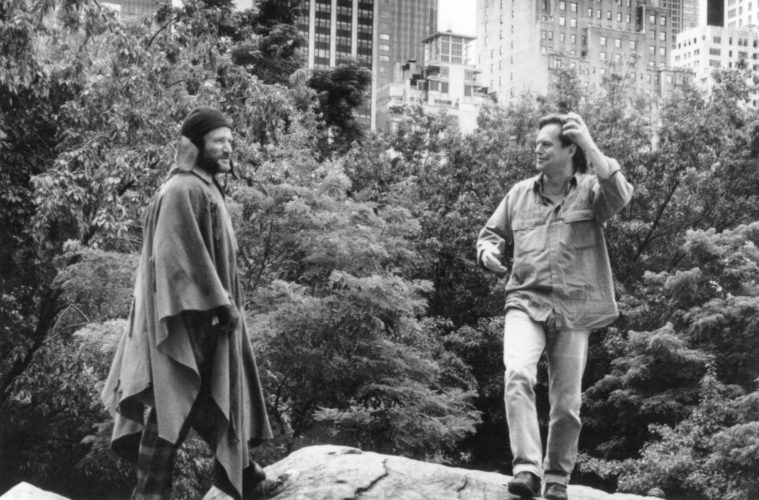 With the tragic passing of Robin Williams, many have been looking back at their favorite films from the actor and the one that most seem to agree is in the top tier is The Fisher King. Ashamedly, I had yet to watch the drama, so I recently queued it up on Netflix and fell in love with the lively, affecting work from Terry Gilliam. It looks like another viewing is in store as an out-of-print commentary from Criterion’s Laserdisc has made its way online.

Before we get to that, however, the director recently spoke to Vulture regarding one of the most difficult scenes in the film, in which Williams’ character experiences a breakdown running through the streets of New York. “The last shot we had to do was Robin running at the end of this scene, in this hysterical state. You can even see the light ever so slightly beginning to come on the river in the background,” Gilliam says. “But Robin was so angry because it was such a crucial moment, and he felt he’d been cheated of his ability to really give this moment his all. And Robin was an incredibly strong guy: When he’d worked himself into this state of madness for the part, nobody could approach him. The first assistant, the stunt guy … nobody wanted to get near him. They were terrified.”

He adds, “So, I had to go up there and tell him, ‘Robin, what we have here is very good. And if we look at the rushes and it isn’t, I promise you I will reshoot it.’ And I had to hug him basically, and hold him. I could feel these muscles that were so tense and so strong, they felt like they could easily rip my head off. But that’s what was so extraordinary about him — how he would commit everything and more to what he had to do. That’s also why I think his character in The Fisher King is in many ways the closest one to Robin, just that range — the madness, the damage, the pain, the sweetness, the outrageousness. That was the role I think that stretched him to the limits.”

Check out more on Vulture, and with a hat tip from Cinephilia and Beyond, listen to the commentary below (or download the MP3 here), which can be easily synced up with a stream on Netflix.

Is The Fisher King amongst your favorite films from Gilliam and Williams?