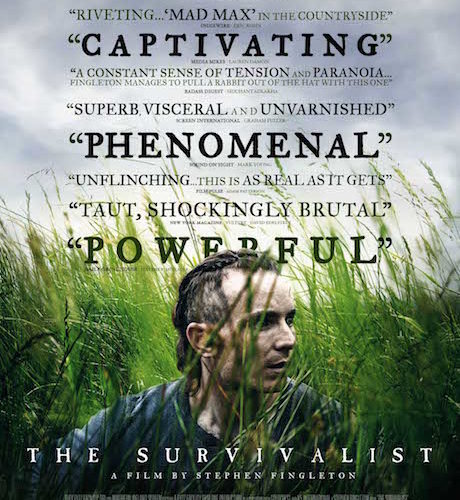 Post-apocalyptic thrillers don’t come much leaner or meaner than Northern Irish director Stephen Fingleton’s gripping debut feature The Survivalist. The world’s population has polluted the earth to the point of extinction – a fact snappily brokered by an opening graph comparing increasing oil production to a rapid decline in the worldwide population – with the few survivors living off the scraps that the land provide. Our rugged unnamed hero (Martin McCann) lives in a rural shack surrounded by woodland, spending his days growing crops in his garden and whiling away his time looking over photos of his past, presumably long dead, wife.

Naturally, this being a post-apocalyptic world, there are roving marauders, though our hero’s garden is fertilized with the bodies of those he’s successfully fended off. He has his suspicions when teenager Milja (Mia Goth) and her mother Kathryn (Olwen Fouéré) arrive at his doorstep to ask for food, pointing a gun to their heads for a long while before he considers them safe.

Milja, on the encouragement of her mother, swaps sex for food in an unfussy manner, and much of the film centres on her growing relationship with the McCann’s character. Yet Fingleton draws out their time together, and the guarded intentions of the Lady Macbeth-like mother Kathryn, with very little dialogue, no music and a visual palette that does for Irish forests what Mad Max did for the Australian outback. It’s a pressure-cooker situation that, as their food rations get shorter and their life chances bleaker, will soon blow.

Martin McCann is rough and craggy in the central role, barely speaking, yet able to persuasively convey the ambiguous edges of his character. Mia Goth, fresh from a bit part in Lars von Trier’s Nymphomaniac, provides able support as their relationship develops, with Fingleton and his talented cinemaotgrapher Damien Elliott translating their connection through measured glances and postures.

Fingelton’s unfussy script gives only occasional hints as to the backstory of these characters, highlighting that this is a world with no future and a meaningless past. The best the three can hope is to survive each day, and much of the running time – a stretched 104 minutes – is dedicated to the mundanity of maintaining life.

And yet his direction lights up the fact that surviving is perhaps about emotional connection too, as little notes from McCann’s performance show him given a perhaps unconscious lease on life with his new companions. And when he gets knocked down in a later skirmish, it’s Milja who nurses him back to health.

Fingleton also shows the grim reality of this life in occasionally graphic tones. A gruesome abortion using metal wiring and a man whose leg gets caught in a bear trap are two scenes that demonstrate a director willing to unflinchingly depict realism in a bleak world. This is a strangely believable dystopia, and all the more brilliant for it.

The Survivalist screened at the London Film Festival and opens on May 19, 2017.