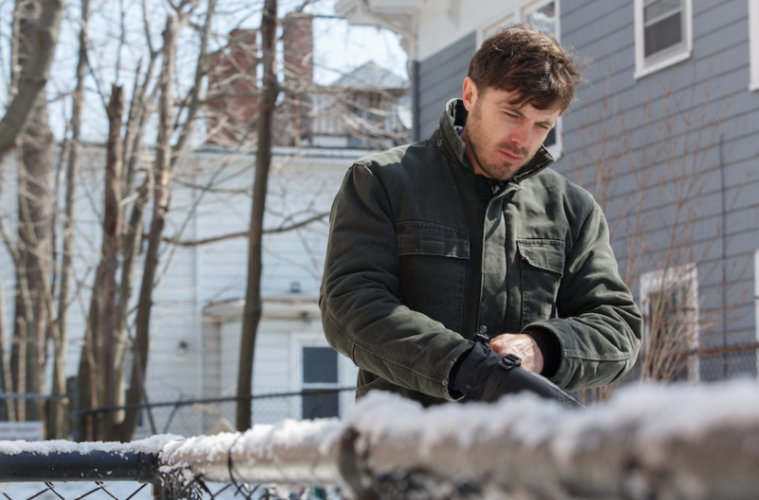 Few descriptors have become more tired and less useful than “symphonic,”and so people have a right to be wary when I say it befits Manchester by the Sea more than perhaps any other film released this year. Kenneth Lonergan‘s third feature is also his third consecutive triumph of people, place, scenario, behaviors, and communication (or lack thereof), a movie that is deeply felt largely because its powers can’t be pinpointed.

Composer Lesley Barber reunites with Lonergan after 2000’s You Can Count on Me, here delivering a score whose presence on the soundtrack is, like the surrounding film, something of a contradiction: unmissable yet unintrusive, and enveloping as it disappears into the dramatic action. Inexperienced though I may be in the practice of speaking with composers, I found in Manchester a perfect entry point; it’s hard to imagine a person who won’t come away with some curiosity as it to how the piece was achieved.

This is your second collaboration with Kenneth Lonergan, following 2000’s You Can Count on Me, while Margaret, the feature he made between them, was scored by Nico Muhly. I’m curious if there’s any reason you two found each other again here.

When Kenny was in touch, he mentioned that we had a great collaboration on You Can Count on Me, and this script was sent to me with the idea that it would be great to work together again. With Margaret, I know it was a longer process — schedules were changing and there were various voices in the mix on that — and this one, I think… I can’t really comment on Kenny’s journey, because his films are all extremely powerful on their own, but there is a wonderful, shared voice of Kenny throughout them as well.

Given the length of time between collaborations, had you noticed any ways Lonergan changed in his directorial voice? Was there a difference in approach when discussing the project?

In some ways, the process was quite similar, in that the script was written and I came into the process fairly early and was able to have space to develop themes and have some time on my own to connect with the words and the characters, and come up with some ideas that were, perhaps, a little more outside-the-box than the process where you have four or five weeks and it is a more conventional score that’s requested. He gives a lot of space for me to build an intuitive connection with the relationships in the script and the world of the film.

In other ways that it was similar, especially in this one, I felt like I could go ahead and make very finished demos for it. When you’re presenting your ideas, very often it’s just a sketch or a little bit of piano-playing — what could be the theme — but, with Kenny, I felt like the right thing to do, especially because there are borrowed pieces, was that I should record some of the music. For instance, the a-cappella vocal music, and really present the ideas as quite finished, so that he could really get a sense of how he could use them while he was editing. That worked really well with this process, having the music in a more finished form.

Did you have much hand in choosing the other music?

No. We did have a meeting where we went through the film, and we talked about the other classical pieces — what the choices were, what worked, and why it worked, and what didn’t work. We did go through it and discussed it. It started to feel like some decisions were in place, and, with a score like this, you have to be sure your music is anchoring and unifying and blending in. Also, it’s refracting off the choices that are made. It’s important to be in on that part of the process, too, and know what’s happening musically. You build the score as your own with those pieces also in mind.

What contexts might he give for explaining his desires?

I think the one thing we did talk about a lot, and wrote each other emails about, was the deeper meaning of the essence of scenes, or what it’s about. We meet Lee and realize that this is someone who’s had an unimaginable tragedy in his life and can’t simply disappear. Life goes on, and he survived it, somehow — yet he didn’t survive it, on a certain level. So we talked about that kind of thing. For instance, when you meet Lee at the beginning of the film, we don’t realize it’s a flashback and that that’s happened to him already. In a way, for the music, it needed to be beautiful. It needed to take in the landscape of this small Massachusetts town. It also had to have this sense that fate was hanging over him, and that fate would have its way with him. There was nothing, really, he could do about it.

I think when I was choosing the music, a lot of it was about performance style. Once I had my themes established, for instance, when I was working with the orchestra, I wanted a very specific sound — sort of the surface of the ocean, but all this tension underneath, and kind of overwhelming darkness that comes across as light. A weight, but lightness. It was very intuitive, but, at the same time, when I was working with the string players, it was to get the right sound — so it was just on the edge of something happening, but not quite. That worked really beautiful with the exterior shots.

In terms of the vocals, at the beginning, I recorded this singer. That piece was recorded in a large auditorium with a more spacious approach, and with the sense of bigger space. The vocalist is singing with a bigger sense of what’s going to happen to Lee and his world. Then, with the other pieces, it’s more from inside his mind, and what’s going on in his memories — inside his very unique, special, individual journey — so the vocals were recorded in a more confined space, and you really hear the breath between the notes, and you really feel that it’s right from inside him. You know? I don’t want to say “right from inside him,” but really connected to a more interior landscape.

This will probably reveal my ignorance of the scoring process, so bear with me. When it comes to, for instance, evoking the sound of the ocean and an underlying tension, how might you select the proper tools? Is it instinctual, where something comes to you and you run with it, or do you experiment with various instruments?

A lot of it is intuitive. When you’re beginning to write, it’s like a real puzzle that you have to figure out, and you have to figure out and distill the meaning of what’s going on in the script — but, also, when you start to see the actual film and take in the pace and tempo of the edits, the visual power of it, the decision-making starts to feel inevitable most of the time. In this case, it just felt right that there would be strings with vocals. A-cappella vocals for most of it, and sometimes with this approach to the string-writing and orchestration underneath — a certain kind of harmonic rhythm and feel to it.

Are there points of disagreement between you and Lonergan about the particular sound?

No, but I would say that Kenny really knows when something works and when it doesn’t. He really can hear the difference between a different kind of recording style, and when the feel’s there and when it’s not. For instance, there’s been a couple of times where I’ve done something as a sketch — me playing the piano or a very early draft of a string mix or something like that — and it just has this certain feel in it. Then there’s been a couple of times where I’ve thought, “Oh, I need to polish that up, fix that up,” and, somehow, that thing that hooks us in or pulls us in, he notices it.

He really will notice it quite quickly, so we’ll adjust the take or we’ll go back to an earlier recording or look at the mix. In You Can Count on Me, we did a session with a couple of string players and felt there was something there that we had not quite heard in my demo, so we went back and recorded again. He works until it’s right, and it’s that kind of, “You don’t have anything until you have something.” I love* working with him for that reason, because I feel like I really share an instinct, and it’s really wonderful to work with someone who gets that and is working, kind of, from the same place.

The film was apparently recut after some festival appearances, possibly with some changes to the structure. I’m curious if the work that’s been done affected your input in some notable way.

Yeah, we did make a few changes after the Sundance screening, and we made a few changes with the music, too. I think it’s just seeing it in that space, in a large space with a large audience. There are a few things here and there that you want to adjust, and it’s a wonderful luxury to be able to go back in and do that. I think the version that premiered at Sundance was slightly longer — I’m not completely sure of that, but I believe the film is a little shorter now — and there were a few places where the music was a little bit bigger.

We went back to, for instance, a piano solo, and, when the soundtrack comes out, there’s an orchestrated version of it with strings and alto flutes — it’s a little bigger — but we went with just the piano solo from that, which was also interesting, when I heard it again at TIFF. Yeah, there were some adjustments made. They were ones where I would’ve thought, “Hmm, I’m not so sure about that,” and then, when I saw and listened, I saw the power in the decision-making. It turned out very well.

I imagine there’s consulting going on.

Oh, yeah. We’re in dialogue about it, and, on both films, I give him an abundance of mixes and different orchestrations so that, when he’s editing the film, he can see what works and what doesn’t — and also edit the pieces of music. I think it’s always wonderful when you can send your music early and the filmmaker is able to edit to the music at places. The soundtrack is coming out in November, and I think that’s a lovely combination of the entire soundtrack.

Do you spend much time with a soundtrack after you’re done with it?

I listen to it, and we mastered and organized the soundtrack, and it was really fun to go back and listen and design that as an experience.

Manchester by the Sea will open on Friday, November 18.