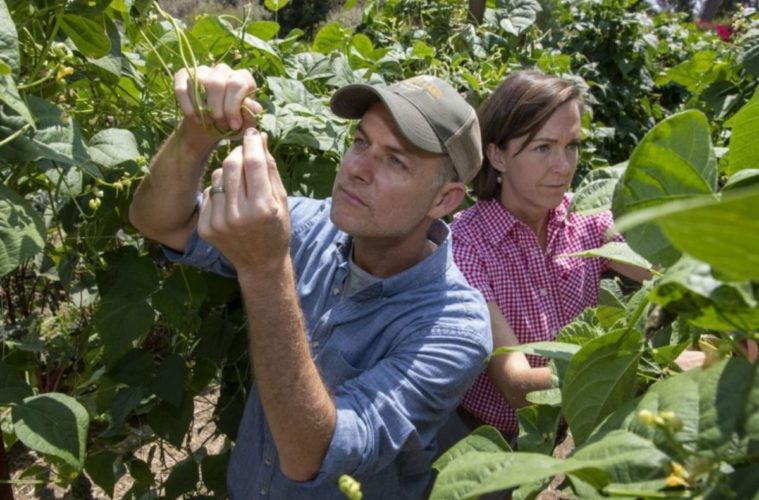 John Chester on ‘The Biggest Little Farm,’ How Fear Fuels the Climate Crisis, and Editing Inside a Barn

The Biggest Little Farm follows John and Molly Chester on an eight-year-and-counting journey to create a farm of their own. The documentary is less a return-to-nature story and more about learning to love your place in the bigger picture. That picture is our planet’s ecosystem, and the Chesters’ place is connecting the environmental dots for creative solutions for their farm’s growth.

We spoke with farmer and filmmaker John Chester about finding a story in his farm’s development. Chester talks about the chaos of editing a movie while covered in cow afterbirth, finding purpose in the repulsiveness of nature, and treating the environment’s harsh elements not as working against a farmer’s work, but as a response and outgrowth of its complexities.

The Film Stage: In the first five years were you filming the farm as you grew the ecosystem?

John Chester: Yeah, some of it was filmed on the 5D, some of it on my phone. I realized what the story was around year five and I looked back on some of the footage I recorded of the interns and realized that there was this thread, this nature thread, of watching the rebirth of the land and the return of nature. Then I spent the next three years making sure I was really getting those beats to cobble together that story. But it wasn’t until around year five that I had the confidence to say, “Wow, we have something really unique to tell.” Who’s going to spend eight years as a filmmaker inside the engine of their own misery, fear, and despair? That’s the whole thing in nature–every year those things repeat. I was seeing these things happen and I would be able to shoot them over the period of eight years and tell them in a condensed way.

Into year five when you realized your story, did you have to shift your focus to the documentary and away from farming?

The editing room was inside the barn, so I would be running out and suturing the leg of a pig, helping a troubled calf be born and run in covered in all that stuff and work with the editor. But what I had at that point was a trusting team who had been through the rhythms enough to allow that sort of day-to-day stuff be decided by them. But there’s still also learning too. It wasn’t healthy. I grew up in a chaotic childhood, so I’m kind of unfortunately a bit more comfortable in chaos, but it’s not always healthy for the people around me. I get calmer in that situation. I had an outspoken family and there was always a lot of chaos and I think, in some weird way, it makes me feel calmer when I’m in the middle of a tornado. But I realized that’s not something I could sustain as I get older.

Talking about the more tornadic things on the farm, for example, you’ll get an infestation of snails and it’s like, “How do we deal with this?” At what point are you like, “It’s gonna be really cool to have this time-lapse of this snail eating our crop” and also say, “Get rid of them so we can make sure that the crop doesn’t die?”

That’s happening every single year. In different parts of the farm you’ll heal something and in another spot, something that was happening in year one is now happening in year three, so I had the chance to shoot some of those things, to capture what an infestation looks like. We spent a couple of years shooting time-lapse photography of snails moving, you know, they’re always there. But the epidemic-level that we captured in some footage wasn’t as prevalent in later years, so we could bring the two together.

Some comments made off-screen sound scripted or re-recorded later, is that right?

We had 90 terabytes of footage. So most of the stuff that was grabbed off-screen may not have been in that exact shot, but probably from that scene. I’m sure that there’s somewhere in the film, sometimes you have to do an O.S. [off-screen audio] to piece something together because you’re cobbling together eight years and not thinking about the narrative over those eight years. It was only in the last three years I was thinking about the narrative and what it’s going to be.

I had an editor who worked on this for a year and a half, and it was amazing what she was able to pull out of actual natural sounds. It wasn’t easy for me to re-record stuff because I’m an active farmer and a lot of the people who were there in those scenes were no longer on the farm because some of them were interns or volunteers. If it was me, then it might be an easier thing to grab a line or something like that.

What do you say to people who aren’t antagonistic towards the environment or farms, but they prefer city life?

Well, I think that the entire planet’s ecosystem is based on a massive level of diversity. Even the way we interact with the planet is part of the plan. There’s an important role for the vegan, vegetarian, the meat-eater, the nature lover, the nature hater. There’s a role for everyone. I think so much of nature is figuring out how to get all of these things to come together to make a cohesive thing. How to harness these disperse creatures with these needs and create a mutualistic environment. That mutualism has to be a bit manipulated by us as farmers, so we’re looking for ways in. The gross stuff becomes less gross because you start to see the purposes in these things. Sometimes I think when it’s so hard and so scary, allowing your brain to try and figure out how it all works together sort of gets you through that knee-jerk reaction to repulsiveness.

In the movie, there will be ten seconds of contemplation to come up with important solutions. How long does that take in real time?

Months! Months. When that stuff happens, we were novices. But the first reaction to when there’s some sort of failure or tragedy on the farm is embarrassment. And then fear. It’s kind of strange. With embarrassment you want to find some kind of solution and work through it quickly and often times you’re putting a bandaid on it. The trick we found in those eight years was to slow down in those moments when you feel that fear and embarrassment and take that whole thing apart, figure out what fuels it and what challenges it, and figure out how to weave it together with different solutions that compound it because that’s how the ecosystem responds to different problems. The ecosystem is essentially an immune system and it just doesn’t fix a problem with one solution. The quick fix in a week might cost you a lot of money and may not last very long and that’s what we learned.

I think if you have a child and that child eventually drives your tractor into the pond, and you’ve had enough time to understand the full complexity that child has as a person, so when he does his first bad thing, you don’t suddenly take the totality of his experience in life and base it on that. You know there’s more potential and you just don’t see him for that one moment. With nature, the more you see the complexity of it, the more opportunity you have to co-exist with it. Even when it appears to try and kill you or take something from you. I think that’s what Wendell Berry means when he says it all turns on affection: we can try and make people scared of the environment in order to protect nature, but it’s not going to change unless we can fall in love with the complexities of it. Then we can find more opportunities to collaborate with it.

Do you think that might be the messaging problem we have with the climate crisis?

Absolutely. I think we work it all based on fear and people will only short term change how they act based on fear, but if you get them to see differently, then you’ll change everything. I don’t think people see nature in the most productive way for us as a species to interact with it. Unconsciously, over the last 200-something years, we’ve wiped 46 percent of trees, we lost one-third of the topsoil and we’ve done all that unconsciously. We’ve doubled the amount of C02 emissions in the atmosphere. We’re a very powerful force of nature. Imagine what we could do if we were conscious of that force? Whether there is a climate crisis or not, there is an ecosystem response to our being here. That’s indisputable.

What do you think about the high carbon footprint of streaming music, and therein movies too?

I have no idea. I’m a farmer! [Laughs.] I don’t think there’s a perfect answer to any of this stuff. There’s imperfection in all of our solutions. I mean, I’m promoting this film and I had to fly here. It’s ridiculous, but I think when you become conscious of how to interact with it, I think we will find more sustainable ways to prolong our existence so we can continue to change these things. Do you stream music?

You hate the earth! [Laughs.]

In the documentary you say that after so many seasons on the farm you start to anticipate things. Eight years in, what’s next?

That’s an interesting question. I didn’t mean to imply that every year we can predict the problem, but every year is the year of something. There was the year of Morning Glory, the year of Bermuda Grass, the year of goffers. What we know is there will be something this year that will feel like an epidemic and now we spend less time panicked over that. In the beginning we used to think every single thing was going to be the thing that killed us. Now we learn that it’s just part of farming.

The Biggest Little Farm is now in theaters.