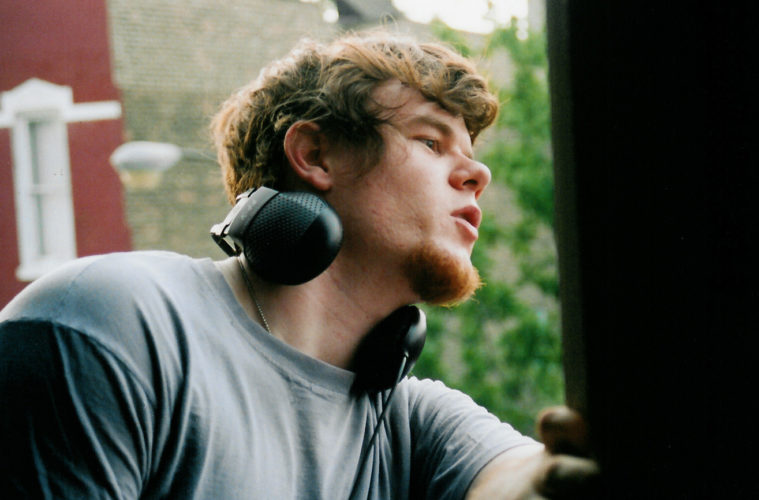 Known for being one of the forefathers of the mumblecore movement in American independent cinema, as well as a distinctly prolific nature (having completed eleven features since 2011), Joe Swanberg has made a name for himself while wholly sticking to his guns. He sat down with me at the Fantasia Film Festival, which was hosting the world premiere of his newest, 24 Exposures, as well as his starring role in breakout festival hit You’re Next, from that film’s stars Adam Wingard and Simon Barrett.

You’ve been inspired by directors like Eric Rohmer, Maurice Pialat, and Jean Eustache, but when you’re doing a genre film, like 24 Exposures, are you still carrying those same influences?

Somebody like Pialat is seeped into my bones at this point — like, certainly the direct confrontation of those characters — and a lot of the aspects of his work are just in there, subconsciously. With 24 Exposures, specifically, I was thinking more of Zalman King and these Cinemax or Showtime late night erotic thrillers that I grew up with, that were sort of like informative to my early sexuality, like what it meant for my parents to go to sleep and me to watch something I wasn’t supposed to watch. But that’s, like, only a small part of the story, like sort of the visual influences, but definitely the characters in 24 Exposures (and my preoccupations) are still very much rooted in that — those kinds of character-based stories.

You’re making this film with friends and frequent collaborators, Adam Wingard and Simon Barrett. How has your working relationship changed with them over the years?

I think that we took baby steps into working together. The first thing I did with Adam was just a one-day role on this film he made, and then a couple months later they brought me back to act in A Horrible Way to Die — and, then, right after that, I brought him up to shoot something of mine. We were sort of testing the waters and, at this point, I would do anything for those guys, we’ve certainly become better friends and there’s just now a certain common language amongst us that didn’t exist before. So, like, when I’m in L.A., sometimes I’ll stay with Simon Barrett, and they’re buddies in a different kind of way.

But their careers are going to be really different than mine. It was interesting, because we fortunately met each other at this sort of cross-over point where, even though they were making very different sorts of films than mine, we were working at the same budget level and with the same people; there’s just a lot of natural overlap. But, at this point, they’re just heading in sort of polar opposites. What I’m hoping is that we can keep the collaboration up, though it’ll probably be way less apparent. I noticed this in the You’re Next press booklet, but Simon Barrett is actually a licensed P.I. Is that a bit of autobiography showing up in 24 Exposures?

Yeah, definitely, I mean, 24 Exposures was really an attempt to document their working relationship, so making Simon a detective was very much a nod to that. They’re a real odd couple, if you ask me; I wouldn’t pin them as two guys who would have such a close working relationship. Essentially, at this point, they’re a team; their personalities are very different and their backgrounds are very different. So that was fun for me, to try and make the movie function as a genre erotic thriller, but also a personal account of these two strange guys coming to know each other and work together.

In You’re Next, there’s an exchange between you and Ti West about underground film festivals. Was that an in-joke amongst all the filmmakers on set? You, Ti, Amy [Seimetz] talking about having the same situation where you have to explain to family what you do?

Absolutely, that was very much my intention — to embody every family member or friend ever who was kind of like, “So, what do you do for a living?” Especially the line about the commercials, how I like them and think they’re a legitimate form of filmmaking. It was a fun set; it’s cool to be around so many directors and so many friends — and, also, it was a big reunion of sorts, because a lot of us had worked on A Horrible Way to Die together the year before. They let me improv a lot, so there was a sense in all those scenes of poking fun at the world a little bit.

Speaking of film festivals, you’ve noted before that the festival run is often the theatrical run for your films — but are you sensing even more of a shift to films being watched primarily on TVs and laptops? I noticed, on Twitter, you were joking about a rivalry between Drinking Buddies and The Canyons.

It’s the way it’s going to move. I mean, it would be crazy to suspect otherwise. I don’t think it’s all that new; I think that, essentially, what we’re seeing on VOD is a rebirth of the video store. It’s just a digital video store, now, but it’s the same idea. In the ’80s and ’90s, when independent films became profitable, most of the stuff I saw… like, I didn’t go see Bottle Rocket in the movie theater, I didn’t see Swingers in the movie theater, I didn’t go see Pulp Fiction in the movie theater — those were movies I watched on VHS for the first time, and that’s how most of America saw those movies. So, we’re just back at that place. It’s not that the films don’t have limited theatrical runs, still — it’s that VOD has basically stepped into the dying footprint of the video store, and, for various reasons, people can watch movies at home a lot easier then getting in the car and going to the movie theater.

So, I’m not freaked out about it, and it’s especially empowering, just like the early days of the video store — like, if you think about when VCRs first started becoming regular pieces of technology in people’s homes, you could just as easily find independent films as you would Hollywood films, because Hollywood was suspicious of the VHS. Like was it going to lead to piracy — “were people going to completely rip us off” — what they found, eventually, was that it was hugely profitable and, at some point, the shelf-space was dominated by Hollywood — and, then, it was harder to get an independent film in Blockbuster or Hollywood Video.

We’re seeing the same sort of golden age on VOD, right now, where a lot of the big titles are indie movies. That will change: Hollywood will co-opt iTunes and it’ll just be another platform release for those monster-budget movies, and then you’ll really have to dig deep into the menu to find something like Drinking Buddies. But, for now, Drinking Buddies is on the first page of iTunes; it’s a big rental. I feel very lucky to be sort of at the forefront of this. There’s a chance for a lot of indie movies to make money that they won’t get five years from now.

And, speaking of Drinking Buddies — which is your biggest film to date — do you feel yourself shifting towards making slightly higher budgeted indies, or still ones the size of 24 Exposures?

2011 was your big year with six films out, but, as a result of that, how had your life and art changed?

It was a weird time. All through shooting those movies in 2010, my wife was pregnant, so our lives were changing in a big way because we were adjusting to having a kid — and what that was going to mean, and how we were going to keep making films — but I was kind of on a mission to shoot as much as possible before my son was born. And then 2011 was interesting, in trying to take all that kind of work and put it out into the world; it was a challenge. There’s no system set up for a filmmaker to distribute six movies a year, so IFC put out two of them, Factory 25 I worked with on this DVD boxset they put out. You know, I tried to get creative — one of them I just put on Vimeo for free. It was strange but it was a really great year for me; it was really cool to put that work into the world and see what stuff people are responding to, and how that was going. Now that Drinking Buddies is out and people are watching it —  and it’s doing well — I suspect that it will be easier to put the work through that VOD pipeline.

Definitely. With 24 Exposures, one of the questions I’m asking is, “What is the role of women in these exploitation movies?” Like, are they helpless victims who the male-dominated society is just objectifying sexually, or are they participants in the creation of the project? What is their ownership stake in it? So, as a result, I cast a lot of strong women artists that I know in my own life to come help me make the movie and explore that territory. Like Sophia Takal, who’s obviously a great director, who’s having her own exciting career moment right now. Helen Rogers — just like Greta and Kate Sheil — five years from now, will be a well known actress. Caitlin Stainken, who I made a movie with, is in 24 Exposures as a performance artist and a writer. It’s always been important, to me, to have interesting and complicated women. It’s shocking when you think about how different the careers are for actresses than actors; how much shorter-lived they are and how, at a certain point, they have to start playing moms. It’s really awful and has no correlation to talent; it just has to do with weird societal issues that we need to get over.

I also did a movie called All the Light in the Sky (with Jane Adams) that’s about that topic, an actress in her ’40s who’s having to adjust to these issues. With 24 Exposures, it’s a movie that is actively exploiting and commenting on the exploitation at the same time, so I’m really curious to watch it with an audience and see what the reaction is — but I’ve never felt comfortable standing in a detached position from the subject matter that I’m talking about, so I could’ve made a “poo-poo it’s bad to exploit women” movie, but it felt like an issue movie. The thing I felt more comfortable with was, “Let’s get into it, let’s exploit the women but have the women be an active participation in the exploitation and then let’s have a conversation about it.” So, that’s what I’m hoping the movie does.

How many more films do you have in the pipeline?

I shot a movie in December called Happy Christmas that I’m editing right now, and I have three other projects that are in various pre-production stages — like, three things that may be the next thing. Also, All The Light in the Sky will come out this year, and hopefully 24 Exposures will; it’s always tough to keep track of all of them. [Laughs]

24 Exposures recently screened at Fantasia Film Festival, Drinking Buddies is currently on VOD and You’re Next opens on August 23rd.