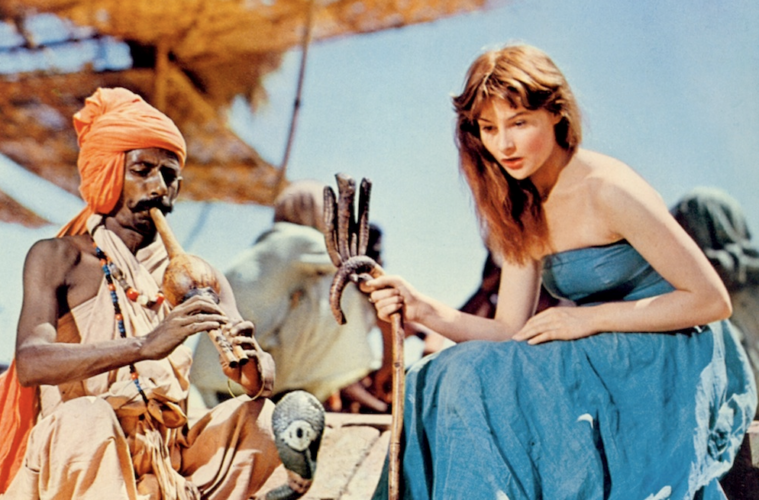 A filmmaker friend once explained me that directing is a form of problem-solving. Narratives are puzzles that present a question: how to best physically represent the story at hand in the way that points audiences to whatever is considered crucial? Though not all cinema must take narrative form, much of what emerged from France post-World War II were filmed stories. And while there was a certain tendency in French cinema, two of the era’s great directors (both exalted by Cahiers) designed two very different, albeit complimentary systems to tell stories. On one side, the young blood of Jean-Pierre Melville, a so-called American in Paris — but, more accurately, a geometrician of human calculations. On the other: the old master, Jean Renoir, who makes every moment of cinema feel accidentally captured, and thus indelibly human.

New releases by The Criterion Collection from each of these directors have put these contrasting styles into conversation: Melville’s piece-de-resistance, Le silence de la mer, and Renoir’s quasi-travelogue to India, The River. There’s little on their surface that strikes me as remotely similar: mer‘s stilted, black-and-white compositions to the Technicolor explosion of The River; the intensely rigorous speech patterns of Melville’s three characters against the slips of the tongue that define Renoir’s subjects; and the grave seriousness that paints every frame of la mer to the ingénue perspective of universal growing in The River. And yet these films also have similar choices: a voiceover explaining events from the future, the use of a single location where most of the action takes place, and, at both centers, a deeply unspoken, forbidden love around which all of life seems to revolve.

Melville’s entrance into filmmaking seems almost pre-destined and patterned by his time as a resistance fighter during the war. Making films outside Paris’s studio system, Melville debuted with an adaptation of a novel written in secret by Jean Bruller, a key text for the underground resistance. Without financing, the film uses its minimal aspects to drive its narrative tension. The set-up is a chess match: Nazi lieutenant von Ebrennac has taken up in the home of a French uncle and niece, who enact their resistance through never speaking a word in front of him. The naïve lieutenant appeals to both through his cultural love of French literature and German music, while also hinting at his adoration for the beautiful woman. Three characters in one room, the soundtrack consisting of mostly voiceover, as well as a constant, ticking clock.

As would be true of each movie Melville would come to make, no gesture is made by accident. Eyesights are strategically averted, hands are occupied with knitting and page-turning so as to veil emotion, and each movement through the room shifts balance. la mer never plays to the coolness tone of his canon work (Le Samouraï and Le Cercle Rouge). It’s instead driven by unspoken desire — the clear diagonal lines between von Ebrennac and the niece (with her always facing exactly in the opposite direction from him) suggests the connection he feels toward this mysterious woman. No line is ever spoken with emotion, but Melville paints his actors toward a human understanding, one built on humility.

Le silence de la mer might play its narrative a little too easy; the major plot discovery by von Ebrennac about his country’s plans and goals felt more prescient in 1941, at the time of the novel’s publication. But the simplicity of its narrative — its almost unidirectional sense of engagement toward a single goal, all leading to that shot — is what makes this picture so striking. The close-up image of Nicole Stephane’s face is perhaps the only reason for Melville to make the film. The intensity of her eyes, the surrounding darkness that underscores her sensuously smooth face, and the way her lips react, releasing a single whispered word almost by accident. It’s not difficult to imagine that the image came to Melville as he first read the book and then slowly designing a movie that would zero in there. In 1961, Fereydoun Hoveyda of Cahiers noted “how far Melville’s style was the only one possible for his meaning to be made clear.” If his more audience-friendly, cool films would create his lasting legacy, what is essential to recognize is the directness of Melville as a singular image maker. Each shot, edit, and line is brazenly direct toward its goal of a tragic love.

Such a thing could be spoken of Renoir’s masterful The River, but its strategy is worlds apart. As Ignatiy Vishnevetsky articulated, Renoir was more interested in the human mess than in the singular emotions, where his films might feel disorganized — or at least on their surface. While intensely structured, they can flow almost callously, as if the final story and moments that emerge feel like a miraculous accident. I think of one moment in particular: the two redheaded women of this narrative, the ugly duckling, pre-pubescent Harriet swings with her friend and rival, Valerie, whose adult body has won the affection of Captain John. As the two rock back and forth on the swing, Harriet bemoans that Valerie has won the affection of John, while Valerie simply states her impassive reaction toward the man. “Oh, Valerie, you are cruel!” Harriet exclaims, while Valerie passively remarks, “I like to be cruel.” Without any change in the shot, her head finally turns toward Harriet. “No I don’t, Harriet. I like him.” The silence sits for a few seconds before Valerie turns her head again, contemplating her very minor revelation.

“What does this scene accomplish?” we may ask if we were sitting in an MFA screenwriting seminar. Not much, really. We know that Valerie likes John, and that she can be a harsh person. But we also realize that she’s possibly capable of empathy after all. Renoir doesn’t cut in for this moment, or emphasize that this matters, and Valerie will return to her cruelty. The swing doesn’t stop; they stay at the same rhythmic back-and-forth throughout the shot. The scene feels thrown-in, sloppy, a course corrective that does nothing to satisfy the narrative. But what is the story of The River? Shot in Bengal in a post-independence India, it follows young Harriet as she grows up in a small colonial complex, looking out at the world toward her. This story is one of understanding, discovering the flaws of both the world and herself.

Thus, Harriet’s created stories could be the greatest implication of her viewpoint. She imagines her friend, the half-Indian Melanie, in a fairy tale of marriage that climaxes with her and the groom-to-be turned into the Hindu gods., dancing with great exuberance. While not as Orientalist as Black Narcissus, Powell and Pressburger’s own adaptation of a Rumer Godden novel, there are aspects of Renoir’s film that carry the weight of the European perspective. Renoir seems to give us a dissection of all sides of India, but his camera of course orients itself toward those that may be more of fascination to a man who grew up in the West. (The intense poverty of India, for example, which became the focus of filmmakers like Raj Kapoor and Guru Dutt, is entirely absent.) Part of this is by design, what Tag Gallagher has called “a documentary-like gawking at India and Indians in every shot, albeit from a girl’s eye.” And while it is — yes, that word — problematic, this very aspect of it, the inability to capture life perfectly or pristinely, to always be missing something, is what fascinates me about the film.

It’s difficult to choose a particular image from The River, because what sticks with me at times seems accidental. Harriet suddenly straightening her curly hair as she spots Captain John in a bazaar; the sudden change in music as Valerie secludes John in the forest, the passions finally set for their kiss; those absolutely strange push-ins and pull-outs of the camera during the siesta montage, which itself shields us from the most devastating moment. Even an attempted suicide is treated with a strange empathy — the fading dissolve already saving the character before she has even attempted the act. To speak of Renoir is to speak of human moments, of things glanced by the camera instead of captured. Truffaut once wrote, “Renoir will sacrifice anything — plot, dialogue, technique — to get a better performance from an actor.” But it was not the performance Renoir was after; it’s the fact that the human face and body can tell the story more than cinema’s manipulation. Simply putting the camera in front of the body could often be enough. Melville’s world was one of singular moments — something highlighted into extreme making apparent what was invisible. Renoir also sought the invisible, but in a way that it could be missed by his young protagonist. These two giants of French cinema created cinematic solutions to the same simple problem: how to find humanity in a world that often feels inhuman.

Quotes from Cahiers Du Cinema can be found in Jim Hiller’s collection of translated pieces from the journal (Volume 1).

Le Silence De La Mer and The River are now available through The Criterion Collection.