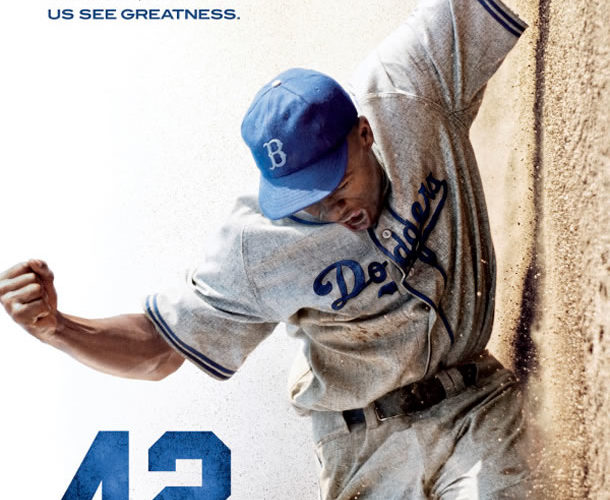 After a pair of impressive teasers, we’re hoping that the Jackie Robinson biopic 42 is one of the surprises of the spring and now Warner Bros. has delivered a slick new poster that is keeping up our excitement.  Directed by Oscar-winning L.A. Confidential screenwriter Brian Helgeland, one can see newcomer Chadwick Boseman slide into home, sideways. Check it out below for the film also starring Harrison Ford, Christopher Meloni, Ryan Merriman, Brad Beyer, Judy Tylor, Jon Bernthal, Nicole Beharie and T.R. Knight. We’ve also got the first poster for Noah Baumbach‘s Frances Ha, which has simply expanded a still, slapped on a pink filter and added some white text. Still, there’s not a whole lot that won’t have us looking forward to the next film from the writer/director. Led by Greta Gerwig, back at TIFF we praised the film saying the “coming-of-age story for the emotionally stunted delights.” Check out the poster below and the first clip over at EW. Lastly, also from EW, we’ve got the theatrical poster for the WWII drama Emperor. Directed by Peter Webber (Girl with a Pearl Earring, Hannibal Rising) the film brings together Tommy Lee Jones and Matthew Fox, as one can see below. The theatrical trailer was a bit middling and the poster has an odd glossy style, but we’ll be able to see the film soon enough when it launches next month. Check it out below. Emperor arrives on March 8th, while 42 lands on April 12th and Frances Ha hits theaters on May 17th.