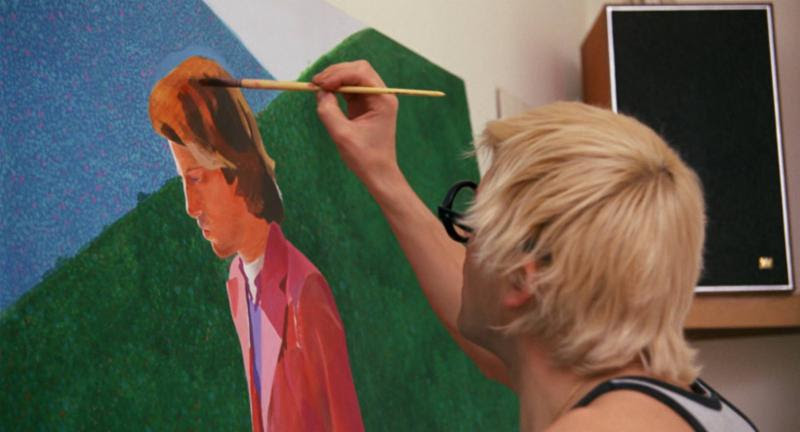 Jack Hazan’s A Bigger Splash finally found its niche. Not to be mistaken for Luca Guadagnino’s 2015 film—which didn’t have Hazan’s blessing to share the title—Hazan’s 1974 film played the Locarno and the New York Film Festivals among others, but didn’t have much of a theatrical footprint outside of London.

Splash follows artist David Hockney in the aftermath of his break up with lover and muse Peter Schlesinger, with unprecedented access to their inner circle. A year into the shoot, Hockney convinced Schlesinger to sit for a painting. Hazan saw the opportunity to introduce Peter to the narrative and three years later the film debuted to middling praise but gained a cult following. A Bigger Splash was recently restored and has debuted at New York City’s Metrograph theater in time for the fiftieth anniversary of the Stonewall riots.

We sat down with Hazan to discuss negative gay press during the film’s 1974 release, why Schlesinger participated in the movie despite his breakup with Hockney, and how his film is a precursor to the dominance of reality TV.

The Film Stage: What did you think of Luca Guadagnino using your title A Bigger Splash for his movie?

Jack Hazan: Well, they did ask me. They asked me through an agent and asked, “Would you mind?” and I said, “Of course I mind.” This is an established, well-loved movie from 40 years ago, of course I mind. So then they used the title A Bigger Splash. [Laughs.] They ignored me.

Have you heard from them since?

From those people? No. I don’t know why they used it. It makes no sense. The director obviously felt strongly he should use it. You can’t copyright a title.

Jumping into your movie, how did you get Peter Schlesinger to participate?

With difficulty. With huge difficulty. At first he was very hostile. He didn’t want to reveal himself on film, so he didn’t. It took a year or so before I filmed anything of him. That’s when David tricked him into coming around. David said he wanted to paint the back of Peter’s head. David was paying for Peter’s apartment just up the road, just a studio apartment, very small. When Manolo Blahnik the shoe designer was living in the same apartment building, Peter came around, took one look at me, and I thought he was run take off. He was furious. You can see it in that scene, when you go into the studio for the first time to see David, with Peter on the stool, he just agreed to do it. It was electric, the atmosphere. It only lasted about five minutes.

How did you get Peter to participate in the sex scene?

What are David’s feelings toward the film after all these years?

I don’t know David’s feelings. I know, say 10 to 15 years after the film, he felt it was kind of a calendar, a document of his life. Which it’s not, it’s an artifice. I mean, everything in there is staged. There are a couple of scenes, like the party and the fashion show, that are just happenings. But everything else is just staged, what I designed. I would tell him to walk from here to there. It’s like what the Italians did, the Neo-realists.

It’s a bit like a precursor to reality TV.

That’s what they say but I think my approach is more like Andy Warhol as opposed to reality TV. It was a longer process, it went on for hours. Until Paul Morrissey came along and made it more a feature film format.

There weren’t many scenes you entirely constructed from scratch?

It was constructed over such a long time, we would look at what we had in the cutting room and we would decide what we wanted next to make a narrative meaning. We realized what the narrative was when Peter left David. We said this would mean that he was having trouble completing Portrait of an Artist (Pool with Two Figures), which was true. He said, “I wasn’t emotionally hung up, preventing my completing this painting. It was a technical problem.” I said to him, “Yes, a technical problem prompted by your emotional turmoil.”

When the film was initially released much of the gay press said you were using homosexuality cynically, but press surrounding this re-release calls it a “queer landmark.”

A much different reception today.

Why do you think that is?

We’ve moved on. The gay life isn’t so provocative anymore. It has to be that. Also, the genre-bending thing doesn’t seem to upset people anymore. Probably because of reality TV.

People are used to a constructed reality.

And you still don’t see them in many American films.

Yes, in Europe it was often you did. But not here I don’t think. The fact that people kept asking me “how could you get in the shower with David?” I mean, I don’t know. It didn’t bother me. It didn’t bother him.

How did you do that scene? Were you on a ladder?

The camera got soaked. You can see it, one shot has a streak of water going down the filter but we still used it.

With the resistance that David and Peter gave you to document that period of their life, what led you to pursue it?

I couldn’t stop once I started. I invested a lot of time in it. A lot of energy, a little bit of money. Not that much at that point. I couldn’t stop, I was totally obsessed with it. It was my life. I was working as a director of photography which helped me to survive but this was my obsession. But I never knew if I could finish. I never knew if I could bring it to a narrative conclusion. For instance, with Celia, I know I wanted to get her in her car and drive tearfully to David’s studio and look up at David’s empty studio. That took a year and a half, to persuade her. She kept having excuses. I got this, I got that, I got gynecological problems. But eventually she did it.

I read that David realized after the fact, one of the reasons he was comfortable with you was your proficiency with the camera and using a small team to shoot.

When I did that shower sequence, it was just me. I was no threat. I was just there when he was working. In his downtime, I would ask him to do this or that. He would do it because it didn’t mean anything to him.

I know the film played at many festivals, but how the initial theatrical release?

Here in the States it didn’t do well at all. It was shown in colleges, on the college circuit. New Line bought it for the USA. But in the UK, it showed at three or four theaters at the same time in London. For two weeks it was the top-grossing movies in London, which is extraordinary for what is essentially an art movie.

So how do you feel about it playing at Metrograph?

I think it’s extraordinary what they’ve done. I just feel great! After forty-five years, the film has finally been accepted after getting dumped all those years ago.

When was the last time you watched it?

I watched it two weeks ago at the Sheffield Documentary Film festival, and I watched the whole thing through. You know what? They started off with about 70 people, there were about 15-20 people by the end.

Do you think people were offended by it?

I don’t think they cared about it. They didn’t think much of it. They had a party to go to.

A Bigger Splash is now playing at Metrograph and will expand in the coming weeks.