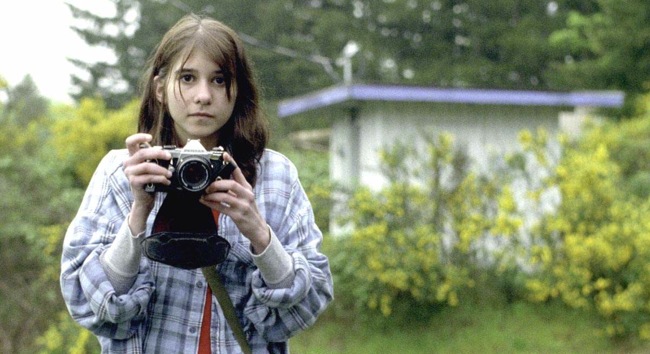 We Go Way Back is the story of young actress named Kate, who reflects on the youthful dreams of her 13-year-old self when dealing with the dissatisfaction of her adult reality. The film originally debuted in 2006, and opens in New York today. We recently caught up with director Lynn Shelton’s (Humpday), to talk about the film:

There have been many stories about ones adult reality not living up to childhood dreams, in a sense I think coming of age is the point when we learn and accept that, but you provided an interesting twist to this by having Kate be confronted by her childhood self. Where did that idea come from?

I think it was where I was at in my life at that moment. For some reason I just had been thinking about these different selves that I had been, so it definitely came from an autobiographical starting place, seedling if you will, and the selves that I was most intrigued by the disparity of [was that of] the pre- and post-adolescent selves, as I remember them. I was in my late 30s when conceiving of the film, and there’s some distance there, so I’m sure I’m not remembering it exactly as it was, but it seemed like right before I hit adolescence, I was at the peak of this kind of agency, I had a real clarity of vision, and was super creative and filled with this sense of power. Then, right around the age of twenty, I had stopped doing most of the things that I had been doing; I stopped writing, I stopped photographing, I stopped painting and I was just acting, and it wasn’t a very healthy relationship between me and acting. It was like I lost my voice and my sense of my own vision for some reason, and it seemed like it had to do with adolescence or something that happened between those two ages.

So that was the inspiration, I was looking back on these different people I had been at different stages of my life, and those two in particular I thought would be interesting to get in the same room together. And that was really my first instinct; I had no idea if I was going to do it as a sci-fi thing where somebody would actually go back in time, or go ahead in time, or if it would be more metaphoric. Maybe there would be a stand-in, a character in the 23-year-old Kate’s life that reminds her of herself. Ultimately, this evolved; the form that it’s in now kind of evolved as gentle, magic surrealism. You could also see it all happening in her brain, like she has this psychic break and this is what’s happening. There’s different ways of interpreting it, and I wanted it to be open that way. At the start of the film, Kate is just recently out of a relationship, after which she finds herself involved in a number of empty hook-ups. Do you believe this emptiness she is filling is due to being heartbroken, or just finding herself in a familiar place?

It’s not heartbreak at all. There’s a scene where her mom sends her pictures of her and her last boyfriend, who she has just broken up with, and she’s putting those pictures away, and she opens up a photo album, and she finds a pile of pictures of her with [other past boyfriends]. I sort of see her as a serial monogamist; she’s been one boyfriend after another, after another. Sometimes when that happens, especially as a young woman, when you never have a chance to just be alone, you can hide yourself in the relationship. You can avoid facing, “Who am I? What do I want?” if you just go from boyfriend to boyfriend.

It’s not heartbreak that I see her being in; she might be lonely, but it’s much more that she’s in a place where she has to come to terms with the fact that she’s been working hard, just doubling-over, to please everyone around her. Especially men, but women too; there’s this stage manager that calls her, and makes all these demands on her… it’s just the people around her that she’s trying to please, and assiduously avoiding what it is that she wants for herself. I think she’s finally coming to terms with the fact that that’s what she’s been doing.

One of the most humorous, interesting characters is the theater director, played by Robert Hamilton Wright. Can you talk about where some of his antics came from, and maybe also your choice of having a theater company as a setting?

The whole film is… it’s all a little scary this came from an autobiographical place because I was never as bad off as poor Kate. I was never quite as passive, or quite as easy to fall into bed as she is. It’s definitely a hyperbole, the whole film, and the same with him. First of all, that actor is an institution on the Seattle stage, and I’m a Seattle filmmaker, I made this in Seattle, and so to work with him on this was a huge honor. He’s done so many amazing productions in theater, in Seattle, and is very well known there. That character presents the exaggerated, condensed version of every crazy director that I have experienced myself as an actor. Also, you hear stories; you’re in the theater and people gather stories about slightly off-their-nut directors. The idea behind him too is that he’s not always wrong, I didn’t want him to just be this crazy guy. I wanted him to be really driven by his passion and vision, and sometimes when he goes down the road to following his instinct, it pays off, and other times not so much. That was definitely inspired from real-life, but not from a single source; it was a conglomeration from various experiences that I and my fellow actor friends had had.

I loved the texture of the film, with the choice of shots and mix of sound. Can you talk about the process of making some of those choices?

I really wanted this to be a piece of suggestive filmmaking; I really wanted the camerawork and the editing style and the sound design to reflect the inner state of the character, because it’s really about this character portrait of this woman, this crisis she’s going through. I really wanted the audience to be with her and really feel that. It was a really great opportunities to explore ways of doing that; I went back and forth in the shooting style and took two kind of role models. When she was feeling detached and kind of isolated and numb, mostly the scenes in her apartment, I wanted to shoot wider with static tripod shots, and to isolate her in the frame, and that was Ozu, the Japanese director. I had just seen a festival of his films, and was inspired by him. And then I also wanted to be able to utilize shallow depth of the field, going in and out of focus, handheld camerawork and POV style, and Lynne Ramsay was really a huge inspiration for me there. Her films Morvern Callar and Ratcatcher both were big inspirations for me. I wanted to have the balance of the two, being able to go back and forth depending on the state she was in. There are also a couple scenes where she’s just bombarded with emotion and sensation, and feeling overwhelmed, so I used jumpcuts as well in those circumstances, to give the sense that she can’t even catch her breath before the next thing is happening…

This film originally debuted at festivals in 2006. Can you talk a bit about what it’s like to finally have the film find its ways to theaters?

It’s surreal. When it was first made [and premiered], I had a great experience; it just launched everything for me. It got into Slamdance and won the Grand Jury prize there, and then it went on a little festival circuit in the spring of 2006. On that circuit, I met so many people who then ended up inspiring me and who I ended up collaborating with; Joe Swanberg, I acted for him, and he introduced me to Mark Duplass, who I’ve now collaborated with on a couple of films. It just sort of started everything for me. But, the film itself just ended up getting put on a shelf, and the money ran out and we were never able to clear all the rights, and we were never able to get it in the place where we could just get it out there. Every week over the last few years, [I’ve received] requests from people to see the film, and it’s been so sad to not be able to say, “Here. Here is the film.” It’s really wonderful, and it’s my first film, so it’s very strange; it’s like a whole other person made that film in a way. It’s very interesting for me to see it, and think about where I was at then because I’m such a different filmmaker now, but I’m also very proud and fond of it. It’s like an old friend coming out and saying, “I’m still here!” It’s a really nice, great feeling.

We Go Way Back opens this weekend in New York, check your local listings for showtimes.