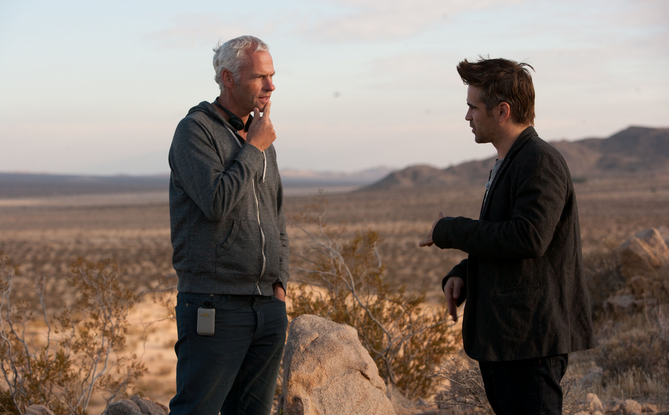 Writer/director Martin McDonagh always delivers a rare brand of cleverness. The man behind In Bruges and his newest film, Seven Psychopaths, could probably find a dozen quotable lines about the dullest of topics. But dull isn’t a word McDonagh can be ascribed to, as both of his critically acclaimed features move as fast as his dialogue does.

Despite his knack for quick banter, McDonagh never goes too far. Surprisingly, it’s not like the Seven Psychopaths writer/director constantly has that balance between clever and showy on his mind all the time. The writer’s block-free artist’s process is incredibly organic, with little revisions and zero treatments. McDonagh says you get surprises out of that approach, and it shows on screen.

Here’s what Martin McDonagh had to say about wanting more than just men running around with guns, deconstructing Hollywood cliches, and how to make characters discussing their feelings in the desert acceptable:

How close are you to the character of Marty (Colin Farrell)?

You also wrote a bit of a love story like Marty wanted to. [Laughs] Obviously Marty’s main struggle is writer’s block. When you hit a roadblock in the writing process, what do you do?

To be honest, I’ve never really had it. I’m very lazy, but I never actually get writer’s block. I think you have to just put in the time. When you write every morning, it’s going to be tricky, but you just have to sit down and do it. Even if you don’t have anything, you have to put in the hours.

So you’ve never even had one scene that’s taken you months to crack?

No, no. I breeze through it, with one following the other. I never do a treatment neither, so I never plot the thing through. Everything is quite organic. If you write a scene that’s a dead end, you just come up with a new one. It’s not like you’re filling in blanks or gaps.

Do you write a lot of revisions, then?

Not really. I do it properly the first time [Laughs].

[Laughs] You make it sound so easy.

[Laughs] It is! I should try it more often. [Laughs] Well, there’s a line Marty has about how hard it is to write something without guns, so does it help having most of your characters carrying guns?

It helps having characters who can do anything at any minute. It’s fun to write, especially Sam Rockwell‘s character. That character is so out there he can take the film to a completely different place. At one point he blows up a car, and I didn’t know he was going to do that until he did it. The trick was to set up a character who could do something like that, where it feels normal. An audience member doesn’t know what’s going to happen, because I don’t know what’s going to happen. It’s fun doing that, going down different paths.

You poke fun at a lot of the “man with guns” genre cliches, but you still use some of them in the film. Do you think it’s okay to use them as long as they’re acknowledged?

Yeah, I think so. I could never do a conventional “guys with guns” film. I don’t think that’s a place I’m ever going to go to. I think you can’t mock it so much without treating it with a degree of respect. There’s a place in the film where Marty says, “I think we should all just go in the desert and talk about our feelings.” Now, if you set up a conventional Hollywood film, like we do at the start, then you can getaway with that kind of talking for 10 or 15 minutes.

You still have to obey certain conventions, like bringing the villain back and having some kind of chaos. At the same time, when the villain comes back, you still make fun of that convention. You can’t be so tongue-in-cheek that the film becomes meaningless and empty. No matter how cracked or insane the characters are, they’re all truthful to themselves and ideals, and you have to follow through on that. Plus, having the movie become Billy’s story in a way, you have to follow through on the cliches he loves.

Yeah, yeah, exactly. I think Christopher Walken‘s character takes the place where Marty hoped it would go to from the start, where it’s not all about guys with guns, and hopefully something more peaceful than that. It’s fun to throw a whole bunch of crazy ideas into a Hollywood set up, but it’s nice to have something a bit more thoughtful like that.

When it comes to going less conventional, how do you go about that with your villains?

Well, Charlie is the one who had been wronged by the start of the film, so he has some cause. Although, he is kind of extreme [Laughs]. Like, with Ralph Fiennes‘ character, I like his logic. These are extreme men, but they are very logical and have a skewed code of ethics they stick with. It’s quite interesting and fun to write something like that: a logic that is insane, but it’s still their logic.

Like In Bruges, the structure of Seven Psychopaths is extremely tight. I read you cut out about 30 minutes for this, but when you were writing it, how important did those deleted scenes feel?

I tried to pare down the shooting script as much as I could. Obviously we didn’t have a lot of money to make it and the budget was tight, so you try to get rid of any extra baggage. It’s so strange, when you come to the edit, some things can be thrown away so quickly and so easily, and you don’t miss them. I think we’re going to end up with about 25 minutes on the DVD extras. They’re all fun scenes which came out really well, but they just made the story drag and didn’t serve the bigger picture. It’s so funny how easily you can kill your children [Laughs]. [Laughs] Coming off In Bruges, how did that affect the way you approached the script for this?

Strangely, I had written this before I made In Bruges. I had these two ready to go, but I chose to make In Bruges, because it was a smaller story and something more simple for me to get my head around. Making a film didn’t influence this script, but maybe it has on me a little bit. I wrote a script since In Bruges, and I think, because of editing process, I realized you can get in or out of scenes earlier than I’m used to.

Since Seven Psychopaths is a bigger film, coming off In Bruges, did you feel more confident as a visual storyteller to handle it?

Yes. Well, yes and no. I storyboarded both films, but here I wanted there to be much more camera action. My DP was very comfortable with that, coming up with moving camera shots. I want more swoop. Because In Bruges is very grounded in one place and European, that style of filmmaking worked for that. For this, I wanted to have an American sweep to it. There needed to be the joy of striking imagery and camera movies. It was a combination of storyboarded and getting a great DP, Ben Davis.

Behind the camera, did you want to take on any cliches visually?

No, I didn’t do that so much. I didn’t really watch any action movies to go against them. It was really just coming up with interesting imagery. But you go against them in some way by poking fun at them. I imagined, like Marty, you’re probably tired of seeing those same cliches in films.

Not really, no. I like a good film, no matter how it’s done. I can appreciate a good car chase or a shootout as much as The Master, which is more grounded in character. It’s more playing with the conventions of the bigger picture of Hollywood. There’s the joke you can’t kill the animals but you can kill the women, and those are things I like playing with and thinking about. A good film is a good film, and it doesn’t matter if it’s The Master or a roller coaster ride.

Were you a fan of The Master?

I loved it. I thought it was great. You?

I loved it as well. That movie has made for some great online discussion, because it’s been pretty divisive.

Yeah, someone told me the other day it’s divisive. I can’t believe it. It’s crazy. It’s like watching a novel on film, and it’s so beautiful and smart. I think a few years ago The Assassination of Jesse James was amazing too, so… I’m a big fan of that film as well. Obviously you’re known for clever dialogue, but with both this and In Bruges, it never halts the story. When you’re writing, when can dialog really get in the way, or is that something you try not think much about since you’re about the organic process?

Yeah, it just comes out that way. I never write dialogue for the sake of writing dialogue or the sake of being smart or funny. I just write it. I like writing characters who can talk to each other that way. It’s not something I think about, like, “Oh, is this slowing down the film?” A part of the film is about guys talking, and it’s the same for In Bruges: two guys analyzing sad, horrible questions. I guess I would like to explore a story more told in images, but I’m not sure. I know this is a part of what I can do well, so I don’t want to run away from it neither.

That sounds like a good plan. Since both of your films are pretty much guys just talking, when are you going to show women talking?

[Laughs] Honestly, my next film script is written, and it’s got the strongest female lead you’ll ever see. She’s about 55 years old, and she’s…You know, a lot of my early plays had very strong female characters, especially my first one, The Beauty Queen of Leenane, is a 40-year-old woman and her 78-year-old mother, and that can be as exciting as any of these guys with guns movies. I’m going to do one for the girls next time.