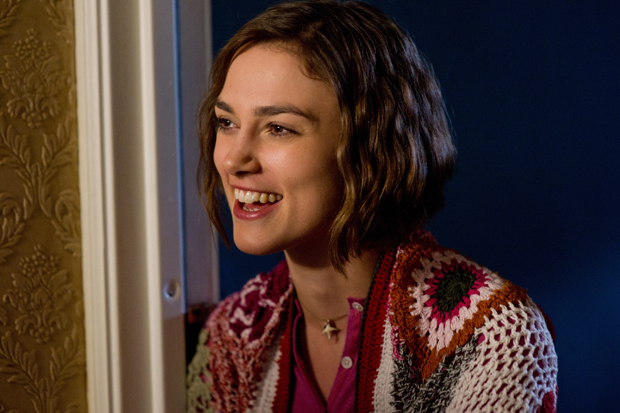 After playing mostly serious or blockbuster roles, Keira Knightley was more than glad to accept a new kind of character: a performance as a free-spirit in the upcoming romantic dramedy Seeking a Friend for the End of the World. The actress recently sat down with us at a roundtable in NYC to discuss her new film, where she gave us insight into what she would take with her at the end of the world, the differences between theatre and film, and why it’s good for a busy actor to maintain a personal life. Check it out below.

This could be considered a comedy about the end of the world. Would you call it a comedy?

No, I’d say it has comic moments, but I wouldn’t call it a comedy. I can’t find one of those nice phrases that it fits into. People have said dramedy, I don’t know. Romantic…it’s not really a romantic comedy. I can’t really find the correct one. How did you think about Penny [her character]?

I just really liked her…I loved the script. I’d never read anything like it. I really liked the idea of taking this subject matter that is sort of as destructive as you can possibly get and putting this kind of other twist on it. It’s kind of comedic but also just making it incredibly personal and very small. You see a film about the end of the world and you think it’s gonna be a massive kind of action blockbuster and there’s gonna be heroes and I love the idea that you take people from a suburban sort of place. And they can’t figure out what to do with themselves and still having the same problems they’ve been having for their entire lives and just trying to deal with it. I loved of all of that.

Do you ever think about the end of the world and what you would be doing?

No, I hope I wouldn’t know about it, I wouldn’t wanna know. Ignorance is bliss. If anyone told me you had 20 days left to go I’d just be in a corner crying! I’d be terrified.

I thought it was interesting that Penny was dragging around her [vinyl] albums everywhere. That’s what she decided she wanted to save. If you were in that position what do you think you would want to save?

The thing about those albums is that she was dragging them around, but she wasn’t dragging anything around to play them on. Personally, I would find that really annoying. I would get as many bottles of alcohol as possible because I wouldn’t want to be sober at the end of the world. That would be horrendous. So, wine. A lot of it.

How do you feel that the advancement of modern technology is affecting the quality of human relationships? Whether on love or friendship.

I don’t know, I don’t really do any of that. I suppose I don’t do it because I don’t feel that comfortable with it. I like the idea that if you’re going to say something shitty about somebody; say it to their face, or don’t say it at all. I think it allows a disconnect with humanity, which I find quite frightening. I think it also means that people can get very confused between information and knowledge. I think it gives a lot of information, I don’t think you can get that much knowledge.

Saying that, I think the connection and the ability for people to put work out there and for young filmmakers and musicians and writers to be able to have a forum where they don’t have to go through the additional methods is completely amazing. Getting out there and being able to tell the whole world of people about that is completely amazing. I think the other side of it is so ambitious, but I don’t know that that isn’t actually what we’re like. I think it’s quite honest to what human beings are and there’s an interesting part where there’s the kind of social norms are kind of taken away and you can really see humanity and it’s a quite frightening picture. But, I don’t know whether that frightening picture is a bad thing. What do you get from theater that you don’t get from being a big film actress?

I think it’s more of an actor’s medium. I think film is a director’s medium. You put together a performance and it’s kind of out of your hands. You can prepare it and go “this is what it is” but ultimately you’re going have done it normally at least seven to eight different ways from four to five different angles. Once it gets into the editing room, it is someone else putting it together so either you’ve got someone else who’s really on the same line as you are, in which case it really comes together and it’s pretty great I think.

Or you’ve got somebody who doesn’t quite get what you’re doing or thinks that you should’ve done it some other way. So film, when it works, is such a fucking miracle. It takes so many people trying to be on the same page. Theater, if something’s not working and you’re on the night you can kind of fix it. You can feel like when the audience is going with you. You’re telling the story every single night, and getting the arc of it every single night, you can feel when people are moved, you can feel when people are losing interest. It’s very exciting. Film is always a guessing game because you don’t always have the audience there.

In addition to Steve [Carell], [the movie] has a varied supporting cast. Was there anyone you were particularly excited to work with?

I mean, Martin Sheen that was pretty amazing. And what about your costuming? Who came up with that? Was that your idea? Were you comfortable with it?

Lorene [Scafaria, director] really had to envision it. That dress…that lavender…she was like “it’s gotta be lavender.” I think my thing was the military jacket. And it had to have a hood. It was a combination of both.

Given the emotional intensity of your role, how did you as a human being shake off from it? How did you cleanse yourself?

I didn’t find you needed to cleanse yourself of her because she was sort of so positive, you know? I mean, as much as she does think the world is ending, understandably, I think the essence of who the character is extremely positive. You’d always come back to someone who is lovely.

Does any of that come from you? Does Penny reflect your priorities as a person?

She’s more positive than I am, I’d love to be as positive as Penny!

Do people ever have to convince you to play a role?

No, generally if I don’t think I’m right for it I won’t meet with them. For everything I do, pretty much as soon as I’ve read it I say, “that’s the one.”

At one point in the script did you know this is the character you wanted to play, that you had to play?

I normally wait until I get to the end. It’s normally how the whole thing washes over me.

Your role in this movie is kind of unusual from what we’ve seen from you. Did it feel unusual, getting into the character?

Yes and no. Yes, I’ve been doing a lot of tragic kind of stuff…so I wanted to do something different. It was the sense of a palate cleanser. I got offered a film [after Anna Karenina] that I normally would say yes, but it was so dark, so I had to do something more positive. Do you ever think you wanna direct a movie yourself?

I don’t know. Yes and no. I think the directors I’ve worked with that I really, really love and really respect have given absolutely everything for those films and I’m not quite sure that I’m willing to do that. And I wouldn’t want to direct unless I was willing to do that. But if there was a point in my life where I went, “this is the story I’d give up a good year and a half for,” then yes.

I know you don’t want to talk about your personal life, but taking this step [her recent engagement to James Righton], do you see a new enthusiasm for your career…changing your attitude?

I don’t know about that. I think that would change naturally anyway, you know. You first become successful and you want to take every opportunity you can. And all of a sudden you realize that whole life-work balance was…was very little life and a whole lot of work. So, I think there’s always a point in your life where you go, “I want to redress that…I want to make sure I spend time with the people I love.” And that definitely means you don’t have your foot all the way down on the accelerator. But I really love movies and I really want to make really excellent movies. And I think that my work improves when I have life experience and when I don’t, and when I don’t go job to job to job…and I take a step back…and then come back to it, and then I’m the person I want to be on set, which is the positive person, and not the person who’s too tired. And I think that’s very important for me as well. Seeking a Friend for the End of the World hits theaters on Friday, June 22nd.