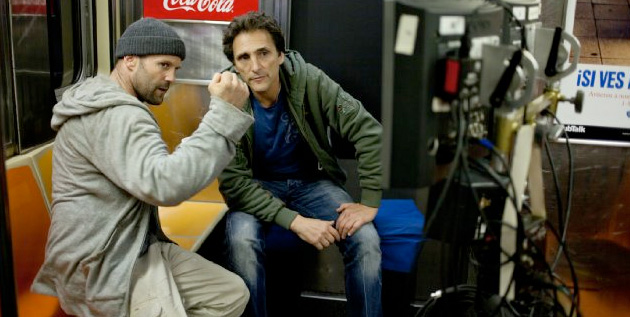 Having worked on everything from Reservoir Dogs to Pulp Fiction and Kill Bill to Inglorious Basterds, Lawrence Bender’s reputation as a producer has become forever intertwined with the filmography of Quentin Tarantino (though, interestingly enough, he’s not on board for the writer-director’s upcoming Django Unchained). That’s perhaps the main reason why Bender’s recurring affiliation with Boaz Yakin, the writer-director behind Safe, has been largely unnoticed. Admittedly, Safe is the first Bender-Yakin collaboration since 1998’s A Price Above Rubies, but, as you’ll learn in the interview below, Bender and Yakin have remained extremely close since the days that preceded 1994’s even Fresh, and the producer has since been in constant search for something that would reunite the two in a professional environment as well as a personal one.

Also discussed in the interview is a gripe that was also made ever so clear by Yakin himself — shooting in New York City is both a physical and a financial challenge, and especially so when a producer like Bender, who’s so concerned with spending as little as possible, is managing the process. But, as Bender dictates, such a trying atmospheres can often be a breeding ground for discovering new ways to, as he himself puts it, “[squeeze] water from a stone.”

What did you bring from your experience working with other directors to this film, given the budget constraints?

Well, I guess two things come to mind. One is, I guess I’ve made a career of – and I think everyone seems to do this now – squeezing water from a stone, when it comes to budgets. And this movie feels like we got an extra $15 million or $20 million out of it. We got a lot out of this movie, [despite] Boaz dramatically cutting our fees and everything because we wanted to make it. One of the ways was to figure out how to make a movie where you don’t compromise your vision, but are able to really get your bang for your buck on the screen. And a lot of the bang for your buck on this was New York City. I mean, this is not The Bourne Identity, but it’s still like how do you invent really cool action when an audience is used to seeing $150 million action movies? So what’s the answer to that?

Inventiveness. Being inventive. And I think Boaz did a wonderful job of being inventive. You know, the scene where he backs up, hits the guy, goes forward, and the guy goes rolling over the thing, and it keeps going. [And] all of the sudden you’re going down the street where you’re going the wrong way. I feel like he just created with a sense of humor just really fun scenes that [are] visual and, you know, it was fun to watch. And when you watch with an audience, they seem to really respond. So one thing would be that, and the other is having a real feeling of what works on screen. You know, as a professional filmmaker who’s made a lot of action movies, you just get a sense of what works, what is exciting, what sells – whether it’s a punch or a certain kind of stunt. So it’s fun. I mean, I love action, crime, and violence in cinema. It’s a fun. I mean, we’ve been saying this since Reservoir Dogs days. [Laughs.] It hasn’t changed. Even though I have a young child now. [Laughs.] So I think those are the two things – the ability to make movies on a lower budget, and sort of my understanding of action and the “visualness,” I guess, of action.

What made this the right project for you to work with Boaz again after all this time? Had you been looking for something?

Yes. So Boaz is really one of my closest friends, [and] I don’t say that just because we’ve worked together. We were friends before we made Fresh in ’94. So we were friends before and we remained friends after that and A Price Above Rubies. And the opportunity just never came up. He wrote this movie on spec, and he wanted to make a more commercial movie. And I wanted to make – you know, I like to make movies that sort of have a unique vision but are also commercial. And he sent it to me and I said, “This is awesome. Let’s do it. Let’s do this together.” And I love him. He’s literally one of my closest friends. I wanted to make a movie with him where I knew he would bring his vision to the table, but also [remain] commercial. Do you ever imagine screening this for Ray Kelly and Mayor Bloomberg, given your impression of the police commissioner and the mayor in the film?

[Laughs.] I never thought of that. I’m sure they would find that amusing. I don’t think they’d be very worried about it, though.

Was that why your casting with Chris Sarandon was such a contrast from the mayor?

That was just – he’s just funny. That’s kind of an interesting way of looking at it, but he’s just a good actor – the days of Dog Day Afternoon and so forth. He just felt like he brought a lot of history to the role.

There are a lot of twists in this film – was that part of what attracted you to the film?

I think the main thing that attracted me was the character. This guy that basically, by saving the girl, saves himself. You know, I think Boaz is really good at writing these kind of characters that have this really strong kind of history together, a historical background. This guy’s obviously pretty down on his luck and is about to kill himself. And he saves this girl. He was about to jump, and then he says, “Oh, I [have] to save this girl.” And then by saving her he saves himself. That kind of antihero, Clint Eastwood-y – I’m attracted to those kinds of characters. And then, of course, [Boaz] did a lot of fun stuff structurally with it. It was just a very well crafted [script]. He’s a very good writer.

You don’t normally think of Jason Statham in a role where he might consider suicide or be vulnerable in any way, so that’s an intriguing casting choice – to say, “Okay, this guy is half this role, he’s not the other half. Let’s play with it.”

First of all, I’ve been an admirer of Jason’s for quite some time. To me he’s a little bit like Steve McQueen. He’s got that – you know, as a young guy you have that Steve McQueen poster on the wall, and there are not a lot of [male] actors that guys would have posters of on the wall. [And] feel proud of it. [Laughs.] So he’s like that. He’s kind of one of those “guys want to be him and girls want to be with him” [types]. Which is a really great combination. [Laughs.] He’s also got that vulnerability. You see it. So I actually called him – I’ve known him for a little while – and I said, “I think this is a really good script for you. You really should do this. It’s in your wheelhouse. I think you’ll do it well. But I think it expands you a little bit [into] things you haven’t done before, which I think you’ll have a fun time doing.” You know, it’s not a huge stretch, but it’s a nice stretch – it’s something in his wheelhouse, but he also gets to stretch a bit, and it’s wonderful. I think it’s special. Can you talk about the process of casting Catherine Chan?

First of all, we were pretty nervous about this role because the movie kind of rests on two people – Jason and her. And we cast here, we cast in L.A., we cast in Vancouver, we cast in Beijing, Hong Kong, San Francisco – all the areas where there are big pockets of Chinese people. We had tapes coming in from overseas. So we had a few choices. And there were some girls that were a little cuter, [but] we just felt like going with someone who – we just felt like she was really good. She was vulnerable and she just felt like an everyday girl. It didn’t feel like she was a little mini movie star. And so it just felt right. It felt like she just mixed into the cast. And, you know, we all love [Catherine], and some people would still ask, “Would you want someone a little prettier?” And I’d say, “No.” I think she’s pretty enough, to me. She’s pretty. But she doesn’t have to be movie star pretty. And she has the right amount of vulnerability. The whole thing is: Are you empathic with her? Do you fall into her shoes? Are you in her story? Do you feel for her? And I think that’s what she did in spades, and I think that’s what makes it really work.

Are there things you won’t do again as a result of doing this movie? Any lessons learned?

I don’t know if there’s one big lesson that I learned on this movie. I feel like moviemaking is – certainly on my first movie I learned a lot of lessons. And as you grow, you always learn, you’re always learning that way. But I don’t know if there’s, like, one big lesson I learned on this movie. I [did] love shooting in New York. I wish it were easier shooting in New York. I wish it were less expensive. We shot about a third of the movie here and a two-thirds of the movie in Philadelphia. And I guess one of the biggest lessons I did learn was I’d never done – you know, we did a lot of visual effects in terms of placement on this movie. We didn’t shoot in China – you figure out how to shoot in Philadelphia for China. We figured out how to shoot Philadelphia for New York. So, living in the present-day world of visual effects, it becomes clear that you can kind of do anything. Well, you can’t do everything – you’re limited by budget. [But] that was kind of fun. Obviously we shot an enormous amount of our big exteriors here, but we would be – and this is something I’ve never done – we really shot half of the scenes in Chinatown here, in New York, and half of the scenes in Chinatown in Philly. And Chinatown in Philly is very small compared to Chinatown in New York. So we really, more than ever, had to mix it up so that we could really find ways to show off that it’s New York.