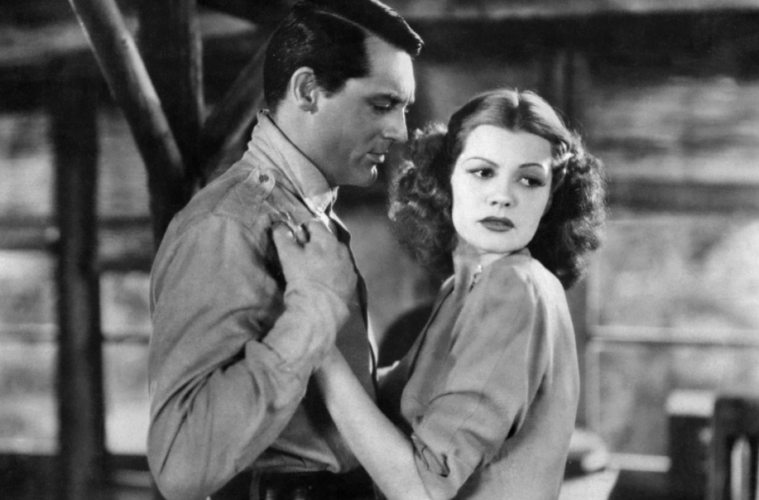 A woman departs a steamer in Argentina and soon finds herself in the middle of a love triangle between two pilots vying for her attention. They carry her off to a bar, then gamble between taking out the mail and a juicy steak date. As the loser Joe takes off into the night, the fog sets in. The music stops, the sounds of the plane motor crinkle above the jungle air. The mist proves too thick, and a fiery mess consumes the ground, but only the woman screams. There’s no time for tears, something the Brooklyn lass has yet to understand. “Who’s Joe?” becomes a denial of existential fear, and the music crowds the air once again. The man fades into memory out of necessity.

This is the world of Howard Hawks’s Only Angels Have Wings, one of the essential cornerstones of American cinema. The woman is Jean Arthur’s Bonnie Lee, our narrative entry way into a motley crew of pilots who risk everything to carry the mail across a dangerous mountain pass, all under the tutelage of Cary Grant’s Geoff. Many describe an invisible style to Hawks’s cinema, but the genius lies in the construction that simultaneously conceals it. Performances and dialogue are paced with such rhythmic ingenuity that the film feels plotless when it constantly moves its story without alerting us. There is little dramatic conflict in terms of actual goal-oriented objectives, but the tension between the characters keeps the film on its toes. Those looking for showy visuals won’t find a signature shot, but the camera constantly frames the characters into the core of their emotions.

Take the case of the iconic ending: Geoff has a last chance to make the final air run to fill the quota just after losing his best friend. When Bonnie demands he stay and prove his love, he claims he’ll flip for it by passing her a two-headed coin. She flusters and shouts at Chance, who dashes in his gear and out the door. Then, without even a close-up, she realizes the coin’s trick and the man’s meaning, then smiles happily into the night. It’s this type of modern sensibility that has kept Hawks’s genius alive for so long — as a director who knew that the surface of pace and rhythm could mask the operations and conventions that made Hollywood tick.

If Hawks preferred the delicate touch, Nicholas Ray’s cinema is a brutal gut punch. Often lyrical while equally direct, Ray often hinted towards a self-reflexive experimentation. He took the classical form and turned the meters up to 10, not afraid to let the emotions wade toward self-parody if it meant a film’s romanticism could register as authentic. For In a Lonely Place, Humphrey Bogart plays a stand-in for the director in this adaptation of Dorothy Hughes’s novella, where washed-up screenwriter Dixon Steele falls for the mysterious girl across the apartment complex, Laurel Gray, played by the always-with-the-wrong-man Gloria Grahame. Their romanticism sizzles because instead of appearing as angelic options, their bruises are on full display. When they share a romantic moment listening to Hadda Brooks at a club, the camera slowly dollies out to give them their space. But when Grahame spots a detective spying on the two, Bogart turns toward the camera with such a forceful turn of the face and eyes that the poetic interlude crashes back to reality.

A B-movie plot fuels the narrative, as questions of Steele’s involvement with the murder of a coat-check girl fuels Grahame’s suspicions of commitment. Bogart does little to qualm such suspicions, straightening a grapefruit knife into a butcher’s weapon or letting his imagination run wild while restaging the murder, light beaming from his eyes. (Jeff Donnell as the detective’s concerned wife is never better.) As Steele grabs Laurel’s neck, the hands scream violence, but the eyes speak his fears of isolation and rejection. In a Lonely Place is true Hollywood romanticism — not because of its cynicism, but in its contradictions. “Anyone can tell we’re in love,” Steele casually remarks while Laurel’s doubts keep her stoic. They’re bad news for each other, but they feel so right, even as the few weeks of passion come to a close in an unsympathetic but honest climax. The writer returns his perpetually backwards-looking gaze to succumb to a life as just another washed-up Tinseltown drunk.

Only Angels Have Wings and In a Lonely Place are now available through The Criterion Collection.