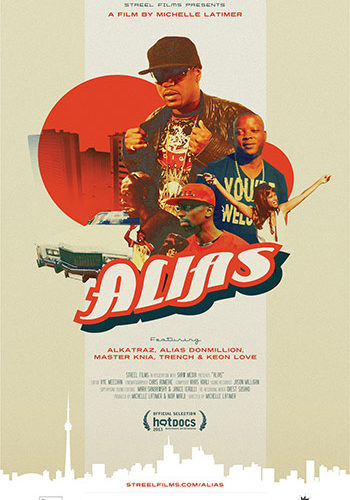 Holding onto hope for a better life to strengthen each subsequent generation so one day his ancestors won’t be forced to hustle on the street, Alkatraz strives to achieve a future through his music. Raising his daughter on one hand and doing what he “has to do” on the other, this father is dreaming of a way out. No longer rapping about gunplay or petty beefs with friends turned foes around the east side of Toronto, Alkatraz realizes it’s time to make money. It’s okay to delve into the mainstream with commercial tracks assisted by female vocalists and uplifting messages because rap culture isn’t a venue constructed so he give up and be another statistic. Rap has afforded him a second chance by providing the potential to earn his child a better existence. As Michelle Latimer’s documentary ALIAS proves, he is not alone. With all the talk and quick media vilification by highlighting the culture’s many shortcomings, it’s almost impossible for the general public to view this world as anything more than a timebomb of thugs waiting to explode. This film looks to change that perspective or at least help those ignorant to the complexities inherent in lower income neighborhoods to understand there are exceptions to the stereotype. These musicians aren’t saints, but they aren’t monsters either. The system is built to keep them down through racial profiling, drug economics, and the necessity of eradicating weakness. Latimer shows the pain of lost loved ones, explanations about the importance of a trust no one philosophy, and the missteps risking to ruin all chance for success. Escape is a choice not a guarantee.

Candidly led into this subculture, five members aspiring towards more become our guides. Alongside Alkatraz are the dream chaser Trench, mother and collage-maker Keon Love, cautionary tale Alias Donmillion, and their kindhearted facilitator Knia (Mr. Know It All). Each is invested in the life to support children, rise above preconceptions, and/or simply because they love the music. Trench hopes to keep clear of the law long enough to support his friend on a European tour while Keon sings at the funerals of her fallen peers and with those still alive looking to break through. Donmillion is working hard to shake a jail sentence mistake he committed after hitting it big with a music video on MuchMusic while Knia studies for the LSATs to assist in preventing his community from being preyed upon by those in power. Latimer goes back and forth between the musicians as their lives intertwine. Knia stages a concert titled “The Stage is Yours” at The Opera House in Toronto that loses him two grand because of security needs and angers many unable to perform due to time constraints—including Keon and Alkatraz who later converge to shoot a new music video on the beach. They’re all trying to gain exposure and an audience by following in Donmillion’s footsteaps, he being the one who found and ultimately squandered the opportunity they so desperately covet. We learn the difficulty of living with checkered reputations and the filter of disappointment those around them look through despite any good they’ve done. While we blindly wait until eighteen to decide our direction, those on the streets choose at twelve and often stumble as a result.

ALIAS is shot with a gritty aesthetic making sure its subjects are kept unpolished and authentic. The stories spill forth from their mouths without the voice of the director cutting through to steer them in one direction or the other. Drug-use is depicted, frustrations are aired, and little can be accused of being fabricated for the camera. No one is trying to pretend they’re something they’re not and with each step they take towards the future we begin to appreciate the struggles they faced to arrive at this point of optimism. While none may make it farther than waiting in the wings of a concert they won’t get a chance to perform in, they’ll still inspire others into following their dreams whether through music or any other vocation at their fingertips. So rather than write-off the lot because we read stories about Toronto recording studio shootings in 2012, why not rally around those willing to put in the work and accomplish success? As Knia says to the audience at his ensemble concert, the many artists going onstage might instill fear in us if we saw them on the streets but they show their hearts through their music. We catch a glimpse of this in a couple off-the-cuff displays of song from Trench and Keon Love and also in a few touching displays of parenthood. Just because rap earned its stigma through gang lifestyle doesn’t mean good can’t also become a byproduct. Artistic outlets provide the promise of improvement and education as we learn from our mistakes. These artists are proving it.