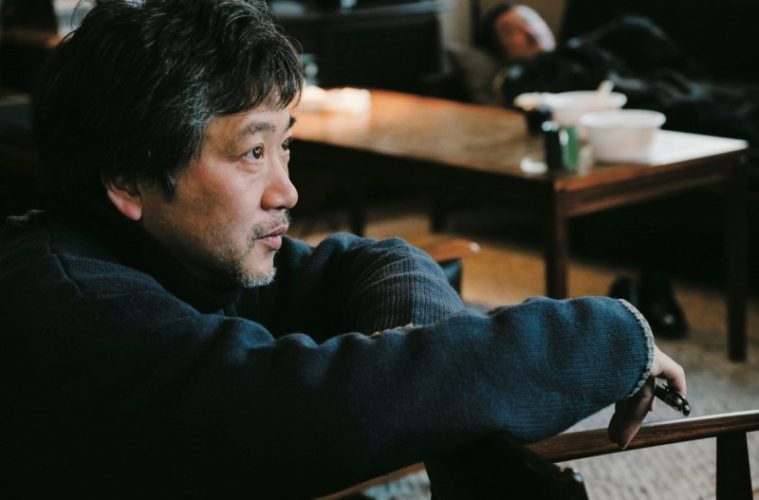 Hirokazu Kore-eda on ‘Shoplifters,’ Remembering Kirin Kiki, and the Evolving Definition of Family

“Chosen families,” a group of people who deliberately choose one another to play important roles in each other’s lives–and a vital concept in queer communities–is the central idea of Japanese director Hirokazu Kore-eda’s Shoplifters.

His Palme d’Or winner depicts the invisible (and growing) segments of industrialized societies that rely on theft to maintain lower class status. In the film, economic hardship gives way to non-family members pairing under the guise of blood ties. Each member of the chimeric Shibata family find themselves performing the role they would among their natural families. Kore-eda’s film follows what happens to this new-nuclear family when an abused local girl Yuri (Miyu Sasaki) is welcomed into the mix.

We spoke with director Kore-eda over the phone during the 56th New York Film Festival and he discusses the tsunami that hit Japan in 2011 and how it created a chasm between family and society. We also talk about the loss of his friend and collaborator, actress Kirin Kiki, and how he understands the concept of family.

The Film Stage: I read that the tsunami that hit Japan in 2011 changed the direction of your films. You said people started emphasizing that the family bond is important and it makes you uncomfortable. What do you mean and what made you uncomfortable with people saying that?

Hirokazu Kore-eda: In 2011, there was the major earthquake and tsunami and that created a large impact on the Japanese people. One of the things that they talked a lot about was how important it was to have that support of family. I understand that it’s good to rely on your family to support you, but I felt like it should have been a wider kind of connection that should have been talked about. I felt that they shut down and become closed off and felt family ultimately is the only way, blood ties are the only way, and that is something that bothered me very much. I felt somewhat disturbed by this and I felt that it was important to explore connections that are not just defined by blood type and family and that became the motif for many of my films after that because I had an unease with this simple, simplistic way of going to blood ties.

Why did you make shoplifting the crime that unites the family in the film? There’s so many kinds of crime they could commit.

There’s actually two crimes in this movie. One is as you said the shoplifting, and the other is actually pension fraud. The reason I choose those two particular crimes is because in the case of pension fraud, the parents die and they do not report a death, and the remaining surviving children continue to collect the pension. The thing about the shoplifting is that this particular kind of shoplifting I became aware of, where the parent teaches the child to shoplift and the child does the shoplifting. In both cases, it’s crime that involves parent and child relationships, so it’s within the family, and I think that is what drew me to it.

Will you talk about your friend Kirin Kiki and what she meant to you?

[Long silence.] It is true our relationship was of an actor and a director, but it went definitely beyond that and I felt that we made films together as partners. The sense of loss is tremendous and to be honest, it is so great I’m not sure I want to talk about it right now.

Did making Shoplifters broaden your vision of society?

When I started making the film Still Walking, and then the films that followed that, what happened was that I kind of narrowed my vision and restricted myself to creating stories that were specifically about the home and about immediate family and sort of explored within myself what family was and consciously reduced the scope of the perspective. With this film, I feel like I went back to where I was in Nobody Knows, to where there’s a family but it’s that point where family and society meet and the friction between the two. Where they collide in a sense, so it’s both the personal and the societal and I decided to go back to that and explore things from that perspective.

Will you talk about the design of the family home? They are a very happy, but poor family, and their conditions are almost squalid. So I would like for you to talk about how the characters interact with their environment.

As a child, there were six people in my family and we lived in a very small space, even smaller than the space in the movie. I remember my mother was always in the kitchen and also I couldn’t find my own space so I created my own little space in a closet in a way that the boy did in the movie. So some of the images in terms of creating the house were based on memories of my own childhood. When I talked to the art department and talked to them about dressing the set, I said two things to them: I want the set to be three times dirtier than usual, and three times the objects in the set. Part of that is normally in Japan you would put away your winter clothes in the summer, things like that, but I wanted all seasons worth of clothes hanging out at the same time because they never really put anything away. These were some of the images I had in terms of creating the set, the family just never put anything away and it’s all there for us to see.

Having explored family from a variety of perspectives, how do you define family now?

What is family? I’m not sure anyone could answer that one. It’s interesting that you ask about defining family because, to be honest, I don’t think anyone could define what family is. I don’t think there is an answer to this. When I was a son and my parents were alive, I saw family in one way. After they passed away and I myself became a father, I saw family in another way. So what family is to me has changed over the years. In fact, I would say that Japan as a society, what family has been has changed largely. Each time and each period, there’s a personal and also social thing, as you change the way you see it, perspective changes, but also as a society our perspective changes. When I turn 60 or 70, I am sure I will feel different about what family is. It’s not so much a fixed definition of family but rather an ongoing process.

Osamu (Lily Franky) and Nobuyo (Sakura Andô) are not actually related to Hatsue (Kirin Kiki), but they somehow convince her to join the family and share her pension with the family, is that correct?

How did they convince Hatsue to share the pension with them in their makeshift family?

I would like to use Hatsue’s words herself and she said: “this is my insurance to ensure that I do not die alone.” So it was sort of an agreement that they would live with her, to some degree take care of her, and make sure that ultimately she did not die alone in the house. And in exchange they got pension.