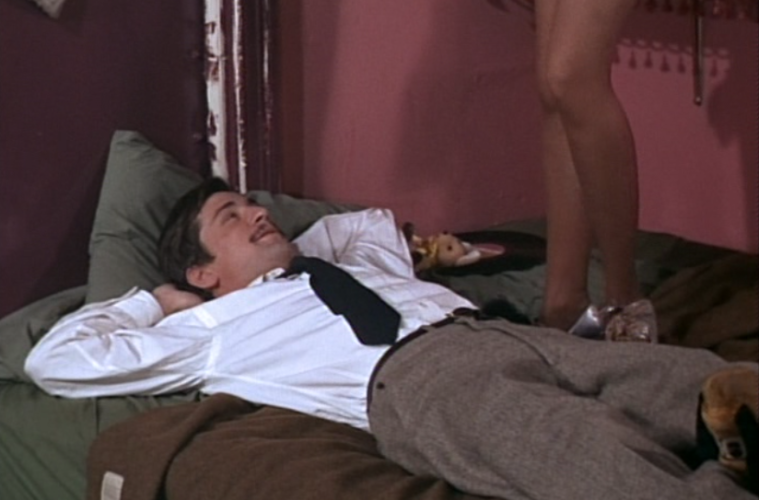 “This is a pretty good land, a fact” was proclaimed by President Lyndon B. Johnson in a television broadcast addressing the Vietnam War — the leader of the free world backing up a “humble” if contentious wording of his nation’s state with an absolute, and thus already opening up the possibility of not just satire, but images as the ultimate medium for telling lies. Perhaps it was the ultimate “prologue” for a 28-year-old Brian De Palma.

With the mission statement of setting out to make something akin to Jean-Luc Godard’s ’60s work, De Palma’s third feature, Greetings, still feels surprisingly his own; his preoccupations already so dominant that it doesn’t come off as a banalization of Godard’s aesthetics and ideas the way so many other rip-offs did. Perhaps the difference is that it’s based in a very personal milieu, situated around three New York buddies in their twenties who are respectively assigned the conspiracy theorist, romantic, and filmmaker. The film’s hilariously succinct IMDb synopsis summarizes that these three “do their things in New York,” though looming over them all is the draft, and their strategies for failing the army physical are trying to get beat up or appear gay.

Our lead three, whether shown in the buoyant mode of sped-up running akin to A Hard Day’s Night (itself an homage to the French New Wave) or scored to the pop title track performed by the long-forgotten The Children of Paradise (far from Pino Dinaggio or Bernard Hermann’s scores), have their expected fun-time quickly subverted. It’s easier to think of the film as akin to the mocking of Body Double than an embrace of the era’s pop films. (Six years later, Phantom of the Paradise cemented De Palma’s vitriol.)

While it’s easy to feel sympathy for the youth in this kind of predicament, De Palma’s attraction to characters that are always at least a little despicable or creepy shines through, be it the machismo rampant throughout his filmography, men peering at women through a camera, or, in many of his directorial “assignments,” trafficking in the world of the crime film. Splintering masculinity into the political, romantic, and artistic (the three key facets of the hip young man), De Palma takes aim at both the United States’ institutions as well as those helplessly trying to rebel against it.

Lloyd (Gerrit Graham), the group’s conspiracy theorist, is seemingly stuck in the endless loop of trying to “zoom in on the photo” of the grassy knoll. Both him and the witnesses to his rantings frequently cite Blow-Up — which, we can’t forget, was actually a commercial success that numerous people in the United States saw — as justification for looking closer. Of course, that film later inspired Blow Out. It less threatens to turn into a conspiracy thriller akin to that seminal title within the De Palma oeuvre, and rather situates us in the burgeoning skepticism that arose five years removed from the Kennedy Assassination, the public’s attitude towards the tragedy shifting from mourning to doubt over the legitimacy of Lee Harvey Oswald being the lone gunman or a lack of government cover-up.

Tending to seemingly less important matters, Paul (Jonathan Warden), the first we see worrying about the draft, finds himself turning to computer dating so as to not feel left out of the “free-love generation.” Title cards give each date a reductive name; like the Bronx Secretary or The Mystic. De Palma’s background as a technology whiz perhaps gave him insight into the template for the algorithmic love of OKCupid and Tinder.

Though Paul’s masculinity is upended by the most assertive of the group: aspiring filmmaker Jon, who most will likely point to as the obvious De Palma stand-in, and a role that Robert De Niro would reprise in Hi, Mom! His artistic endeavors are most vividly portrayed as home movies of girls he’s picked up; the off-screen voice directs them as they pose and reluctantly undress, much like De Palma’s own voice coaching the respective “screen tests” in early and late works Murder à la Mod and The Black Dahlia.

Paul’s project is entitled “The Peepers and the Peeped,” which perhaps could’ve been the alternate title for this De Palma retrospective. Greetings itself employs a number of high-angle shots acting like a surveillance camera, spying on our leads and their various endeavors, be it picking up women or scanning the bookstore — the key location of another Godard riff from the same year, Nagisa Oshima’s Diary of a Shinjuku Thief — for conspiracy clues.

Not yet equipped with all the resources of a big-budget Hollywood production — say, lacking in sweeping Steadicam or split-diopter shots that so instantly set the De Palma tone (a park scene featuring characters darting in and out of the foreground feels like it would’ve used the latter) — Greetings nevertheless gets a certain verve from its real locations, e.g. our three in a low-angle shot walking alongside a Manhattan skyscraper. (If the film had a modern equivalent, our boys would far more likely be in Bushwick.)

Yet the low budget lends to a great final exclamation mark: a newscast taking us to a now-enlisted Jon “Somewhere in Vietnam” (of course recreated in rural New York) replete with sounds of gunfire and explosions likely borrowed from past war films. Once Jon encounters a Vietnamese woman, he begins directing her like one of his New York conquests, which initially seems like a joke — but, as the act of American abuse is echoed in De Palma’s own “serious” Vietnam film, Greetings reveals itself as not so much a dated counter-culture lark but the foundation for a master.