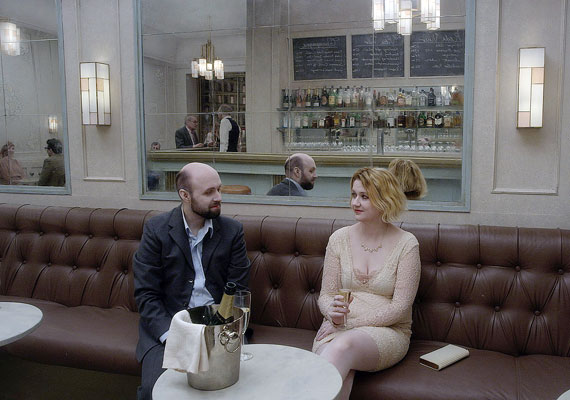 With his Living trilogy completed, which is among the best trio of films cinema has offered this century, Roy Andersson has embarked on his next feature, one which will arrive much faster than we’re used to from the meticulous Swedish director. Though still coming along at the director’s usually patient pace, production began last February on About Endlessness and will continue through much of this year ahead of a 2019 premiere.

As reported on back in 2016, certain sequences will depict World War II (including Hitler in his bunker), “a couple, loosely inspired by Marc Chagall’s paintings,” and “a divorce prosecutor who doesn’t trust banks and keeps his savings under his mattress,” while characters include “an angry dentist, a midwife who loves champagne, a young girl going to a birthday party in the rain, a distracted waiter, a priest having a nightmare that he is being crucified, and a father who murders his daughter in an ‘honour killing.’”

“We are now more than halfway through the shoot, and I am very happy with how this film is turning out. And with less than a year left of shooting, it feels like the home stretch for us,” the director tells Cineuropa. “On Friday 9 February, we went to Oslo to shoot a test for a scene with 6,000 German prisoners of war walking in a snow-covered landscape at the end of World War II. And on Saturday, we shot a big scene called ‘The Assault’, set in a covered market, built in our own studios in Stockholm.”

See the first look below, along with some of Andersson’s commercials, and go behind-the-scenes here. One can also read our conversation with the director here. About Endlessness is on track to be completed in April of 2019, just in time for a certain major film festival.