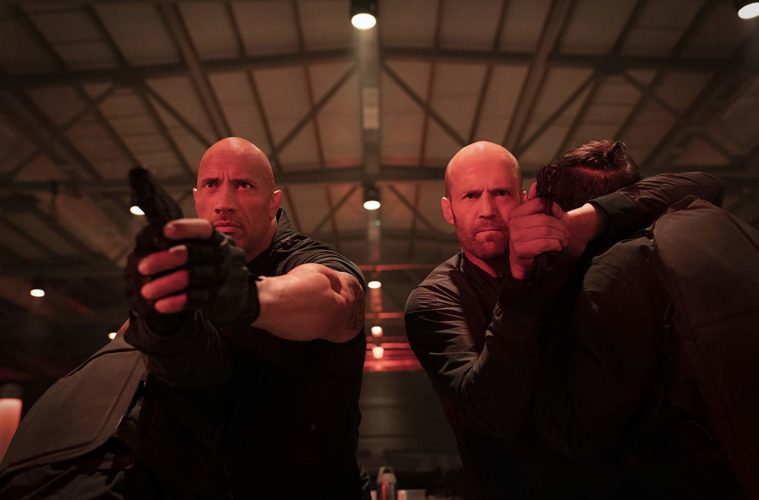 Let’s start off with this: Chris Morgan deserves a lot of credit. The sole credited screenwriter of Tokyo Drift through The Fate of the Furious, he has stepped up as a producer and co-writer of Fast & Furious Presents: Hobbs & Shaw, the franchise’s first spin-off. Serving as the brain trust for this ridiculous world, Morgan has envisioned countless set-pieces, character motivations and plot twists to keep the Fast & Furious series running smoothly. The writing in these movies is often the butt of the joke, an easy entry point for criticism. Though it may seem simple some of the time, the sheer act of selling to audiences the swap of initial super-villain Deckard Shaw (Jason Statham) to lovable team member within a handful of films is a feat to behold. Fodder for any fact-based viewers surely, but a necessary move to get to a Hobbs (Dwayne Johnson) and a Shaw.

Here, the unlikely duo are forced together to hunt down Brixton (Idris Elba), a British bad guy who calls himself “Black Superman.” Propelled by a formula that makes him near-invincible, he’s sent by a nefarious, mysterious group to steal Snowflake, a virus that can be modified to infect whoever, whenever, wherever. Very evil stuff. Before he can snag the MacGuffin, however, Shaw’s cop sister Hattie (Vanessa Kirby) injects the disease into herself and escapes.

Much is made of the evolution of this series, which started out as a fun Point Break-lite programmer that exceeded all expectations in 2001, became a heist thriller then ultimately a globe-trotting spy adventure. It has never been more evident how much has changed than here, director David Leitch mining odd couple laughs to go with impressive fight scenes and apocalyptic circumstances. This is certainly the funniest film of the bunch. A couple of well-placed cameos help to keep the proceedings light, though Morgan does not forget about that ever-important ingredient: family. Johnson collaborated with Morgan to work his Samoan heritage into the third act, while Statham gets to banter with his mother Queenie (the great Helen Mirren, reprising her role) and make amends with Hattie. Vanessa Kirby is a true joy throughout. The young actress has quite the presence, showing off a movie star voice to go with some impressive acting chops. She put in good, more sinister work last year in Mission: Impossible – Fallout.

If one’s forced to choose betwixt Hobbs and Shaw, the choice is Shaw. Statham has grown into both a great action star and a good actor, doing more with a little less. No disrespect to Johnson, who is pulling everything he can out of Morgan’s one-liners. Elba does well in the evil category, though there is a bit to be desired. Often, it seems, these blockbuster storylines must decide whom to linger on, hero or villain. Here, the decision is clear early on. Things get a bit long in the tooth as the finale drags, but there’s enough goodwill to push past the finish line.

There’s a running joke that Chris Morgan will take this franchise to space since it’s all gotten so out of hand. Honestly, if he were to take these characters there, he’d figure a way to keep us engaged and involved.