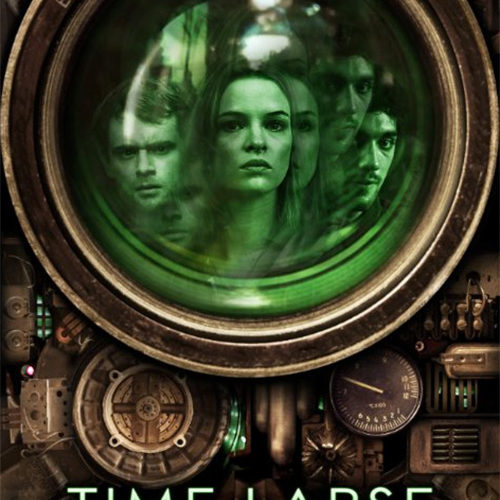 While ultimately a flawed film, Time Lapse does do what every memorable sci-fi brainteaser should: it makes you blind to the obvious. I bought into the premise and mystery, allowing curiosity to help me ignore the somewhat over-wrought CW primetime lineup-like performances that bring director Bradley King and co-writer B.P. Cooper‘s thriller to life. To me standing strong to figure out the potential ramifications of time being altered was paramount. I found myself so caught in the machinations that the actions of the characters themselves became merely means to an end—for good reason. We all know wish-granting devices such as this come at a cost; the question becomes, how much? The device at hand is a behemoth of a camera pointed directly into the picture window of its inventor’s neighbors across the way. Every day it takes a Polaroid at 8:00pm, immortalizing the scene set between Finn (Matt O’Leary), girlfriend Callie (Danielle Panabaker), and their buddy Jasper (George Finn). Obviously somewhat useless in terms of cause and effect minus the trio and its eccentric maker Mr. Bezzeredes (John Rhys-Davies), the photos it had taken thus far are more of a beta test than purposeful application. Before he could move to the next level, however, something forces Mr. B to change habits and indirectly place Finn and Callie onto his creation’s path. Unsure of what to do once finding the camera—and its no longer capable owner—it’s Jasper who conjures the idea to exploit it for money.

To no one’s surprise—not even theirs, surely—this act seals their fate. They think about utilizing it for financial betterment and lo and behold the next photo shows them smiling with loose leaf paper taped to the window declaring tomorrow’s track winners. Jasper can finally get on a hot streak gambling, Callie can quit her job to write poetry, and a mentally blocked Finn can turn blank canvases into paintings thanks to the photo depicting his completed work as inspiration for itself. But just as things start to look like a dream come true, a photo arrives with someone who shouldn’t be inside their apartment. Subsequent entries provide acts this threesome would never fathom and they must forever bring each to fruition so as not to birth a paradox of untrue premonition and risk voiding their existence in the process. Time Lapse is therefore in the spirit of Richard Matheson’s “Button, Button” (adapted cinematically as The Box) or W.W. Jacobs’ “The Monkey’s Paw”. The idea is that everything in our universe has value. So if someone close to you dies and you have a magical way to bring him/her back to life, fate would intervene to even the scales by killing someone else. We believe our decisions are righteous, but each choice eventually proves to be selfish desire at the detriment of others. The conceit behind King and Cooper’s photographs is similar in that while Finn and company are beholden to the singular frame, how they reach that point is completely up to them. Jealousy, hubris, and greed inevitably rear their heads, swaying trajectories until they each come face to face with the darkest version of themselves.

A few outsiders come and go too whether apartment complex security guard Big Joe (Amin Joseph), cold-blooded bookie Ivan (Jason Spisak), or Bezzeredes’ former colleague Dr. Heidecker (Sharon Maughan), yet none truly exist as more than pawns advancing the story. While that isn’t necessarily a bad thing, the plot itself does little to hide this truth and therefore prevent it from ever so slightly gnawing away at the illusion of authenticity. It may just be my background as an artist, but the subplot of Finn being a bona fide painter also reeked of fabrication. The camera shows a whole new piece daily rather than one painting steadily progressing and he doesn’t seem to mind that his supposed best is completed after a couple hours. He’s for all intents and purposes exercising his skills yet not reacting accordingly. I know it’s a minor quibble, but I was irked that someone so intent on creating was content calling something finished simply because it wasn’t in the next day’s photo. “On to the next!” No, it doesn’t work that way. And the reverie Finn and Callie have while looking at the first “finished” canvas is almost as though he sculpted Michelangelo’s David in a day. It’s as if King and Cooper wrote and filmed this very movie just as quickly. Yes, it’s a small detail, but it’s a comment on the creative process by artists and should be rendered in a believable way. But I digress. Maybe portraying it like this was an intentional distraction to keep me on the outside as long as possible before the answer to the camera’s power is revealed.

The acting is adequate from Panabaker, O’Leary, and Finn alike, but I can’t say it felt genuine every step of the way. While that’s more a product of the film targeting a young audience rather than the actors themselves, I do wonder what it might have been populated by characters ten to fifteen years older. I say this because the puzzle itself has a lot of good things going for it and King and Cooper really took pains in closing their time-traveling circle without holes. The aesthetic is also dark and often creepy with stylistic flourishes perfectly suited to the tone—I loved the scene where O’Leary is trapped in a pitch-black room with only a lighter to illuminate the screen. In the end Time Lapse proves intelligent and fun enough to recommend.