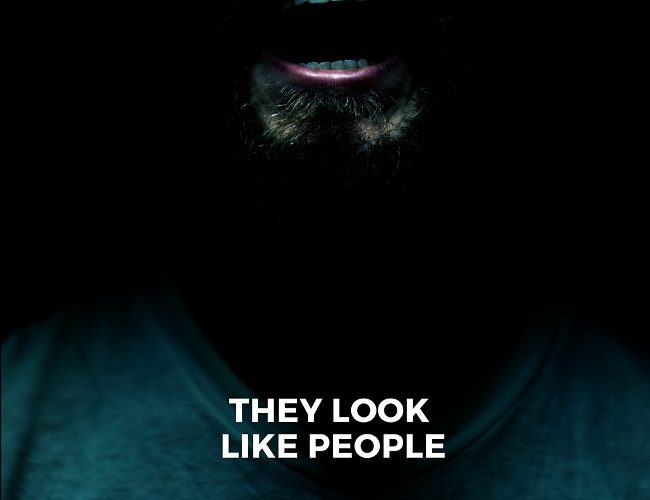 NYC twenty-somethings get their own Take Shelter in newcomer writer/director Perry Blackshear’s They Look Like People, a micro tale of paranoia in the big city that very rarely feels dangerous. Relying on a flat center performance and horror cliches, the film is unable to think outside of its confines, playing its cards too clumsily to ever hint there’s something deeper going on than what’s on the screen.

MacLeod Andrews plays Wyatt, a wayward traveler who randomly meets up with his old friend Christian (Evan Dumouchel) in New York, and ends up crashing at his place. They’re both at different points in their lives – Christian is a corporate dude with a gym membership who wants to woo his boss Mara (Margaret Ying Drake), and listens to wistful motivational voices while riding the subway. Meanwhile, Wyatt hears voices too, no iPod needed, that tell him about an impending invasion from an otherworldly force, and that he must prepare. Nonetheless, after Christian shows Wyatt the basement to his apartment building, Wyatt starts to turn the place into a shelter, and prepares for the very worst.

The revealing problem of the film is Macleod’s central performance. He does not have the expressive face to plant curiosity about his character’s mental state, even when we are shown that his inner turmoil is getting worse. All of his demons are right there, giving the audience nothing to worry about whatever might not be explained, even if the legitimacy of otherworldly forces is at hand. The question of whether Wyatt is crazy or not is a limp thread, turning its deliberate scary moments into bluffs. When Wyatt gets a nail gun in his hand, it’s too obvious that he won’t pull the trigger when placing it against his head. Or, that he won’t do something else when he takes it outside. Not helping its total cause is the flat portrayal of a psychotic state, including the cliche buzzing of flies and low voices. Even Wyatt’s nightmares play like he’s seen too many Blumhouse horror movies, with Christian staring at him before a demon appears.

Blackshear wrote, directed, edited, co-produced, and shot the film, did the sound design (but not its sporadically junky sound mixing) and was also the colorist. Most of all, They Look Like People is an accomplishment of cinematography, moments to be grateful that Blackshear didn’t just turn this into a found footage movie, though it seems possible. It achieves some striking wide shots of New York City that prove more intriguing than the dialogue they host. The film’s most uneasy breadth comes from lighting, too, in which precise dark shadows conceal a face looking back at Wyatt as he is shown laying in bed, creating the possibly human middle-ground desired from the title.

By its end, the movie does have a slightly nervous climax in which Wyatt’s destructive potential finally feels like a threat. Unfortunately, it is an uncharacteristic moment for this big whiff of a horror movie.

They Look Like People is screening at 2015 Fantasia International Film Festival.