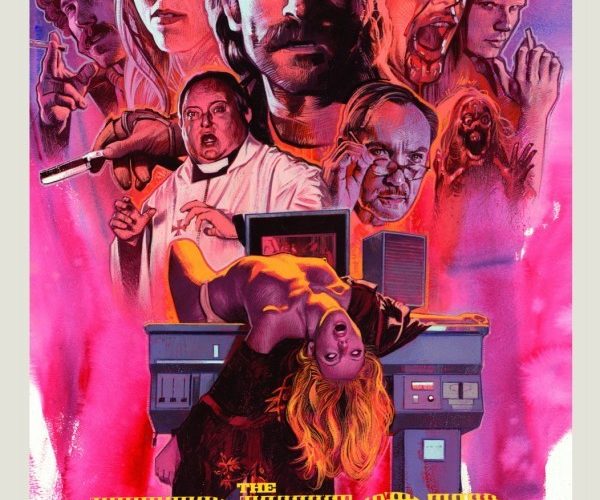 The Winnipeg-based collective Astron-6, film geeks dedicated to trash cinema of the 70’s and 80’s gained a deal of internet nerd attention with Manborg, a shoestring budget labor of love shot on nights and weekends over the course of a few years. An homage to the cheap post-apocalyptic sci-fi films of the 1980’s, it had the virtue of not just overstaying its welcome due to its modest length and chintzy shot-in-a-garage look, but also in harkening to simpler kids films (despite some gore). Yet in turning to the giallo with their new film The Editor, an especially mean-spirited horror subgenre, the filmmakers leave an especially bad taste.

Shot on what clearly appears to be a very cheap HD camera, all while about the physical quality of film stock, the picture is set in an undefined, pre-digital editing year, where once prestigious editor Rey Cisco (co-director Adam Brooks), bides time cutting exploitation pictures after a fit of work-related mania caused him to accidentally cut off his own fingers (an admittedly decent gag). Beginning with the utterly predictable gesture of a movie-within-a-movie (or spoof-within-a-spoof), Rey is thrown into a behind-the-scenes reign of a serial killer than inevitably mirrors the films he edits.

Stretched to a more typical feature-length runtime (or rather just twenty minutes longer than Manborg), The Editor should have a little something extra to justify its (comparatively) big scale, but unfortunately the joke grows old quick. This wouldn’t be quite as irksome had it in its slavish homage to the giallo not indulged so greatly in the misogyny of those films. Virtually every woman in the film is leered at naked or smacked in the face over and over. Yes, we get it, giallo films were regressive. But in presenting it over and over, and really with little in the way of actual satire, the film begins to feel more and more like a celebration than a critique; that the filmmakers get a little too much enjoyment out of women being humiliated.

Similarly, the stilted performances, vocally trying to recall the awkward English dubs of giallos, is like the rest of the film: funny for about five minutes then soon excruciating. While the “name” actors the group managed to nab, Udo Kier and Paz de la Huerta, at least escape the affection through their own trademark performance styles, they do little in the way of actually saving the film.

Perhaps it’s unfair to compare this to something like Quentin Tarantino’s Death Proof, which even though working in somewhat of the same mode of “homage” had far grander resources. Yet still, that film made a point of turning the genre’s flaws and conventions on its head in not just having the female victims fight back, but also spending much of its runtime on simply them hanging out; thus the inevitable turning of the tables feeling more like a natural progression than genre requirement.

Unfortunately, The Editor is the kind of non-ambitious dead movie that fills up genre festivals year after year, one that despite its attempts at veering into a near Fulci-logic (short hand for “doesn’t make a lick of sense”) in its second half, will have already lost the interest of even the majority of die-hard giallo fans.

The Editor is currently playing 2015 Fantasia International Film Festival. See the trailer above.