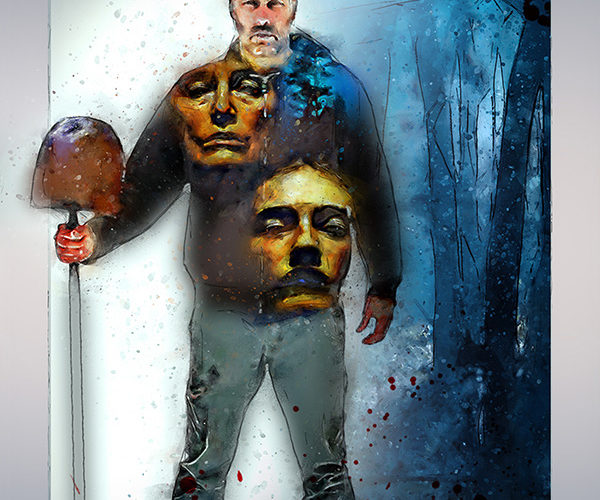 It’s funny where the mind can go when you only know a few details at first. That John Adams and Toby Poser’s latest family-fueled film The Deeper You Dig is horror was enough to convince me that a line spoken by Ivy’s (Poser) daughter Echo (the filmmakers’ own child and co-director, Zelda Adams) about going hunting meant their game was humans. Was it a wild leap of my imagination? Sure. But here’s a woman dabbling in the occult who tells her goth kid that she must meet with a client who’s hired her to channel a dead husband. They possess a very frank relationship with an icy disposition and could have easily been blood-hungry ghouls in a supernatural creature feature had Poser and Adams wanted. Spoiler: they didn’t. Things are more dramatic and nuanced than that—a necessity considering the trio’s minimal budget and do-it-yourself impulses. Mom and daughter would have been hunting deer with the hope Echo could bag her seventh in seven outings if not for an accident on the road wherein a drunk Kurt (John Adams) hits the girl with his truck. Too scared and impaired to call the police, he picks her up and takes her with him. Because the snow-covered ground is frozen and his lodgings are an abandoned home he bought to fix and flip, Kurt places her in the bathtub and waits until the moment is right. And while we can assume the “tell-tale heart” scenario coming where guilt manifests as nightmarish visions, there might be more to it.

Just because Ivy and Echo aren’t werewolves or demons doesn’t mean their inclination towards the “dark arts” isn’t real. Belief goes a long way where truth is concerned and their faith in the notion that a purgatory known as the “Seven Circles” exists allows for a connection beyond the grave. It will of course come at a price of which we might not be initially certain despite the creepy imagery following an encounter with Ivy’s former colleague Dell (Shawn Wilson) helping her to open a door. Only when Echo begins haunting Kurt do we recognize a second link: this time between killer and killed. It ultimately doesn’t matter how far down he buries her physical body now that her released spirit has burrowed inside his own. So while the police run in circles following non-existent leads, the main players come together in a jumble of overlapped encounters in search of stability. Ivy begins hearing whispers as she loses time and wakes up in odd places. Kurt starts talking to the dead ghost of his victim, threatening to harm her mother if she doesn’t go away. And Echo is on the fringes, fighting to reclaim her life in any way she can with the dangerous assistance of whatever powers are currently allowing her to walk the earth. Things can get a bit confusing when everything Ivy hears allows us to understand what’s happening while she remains in the dark despite a familiarity with the afterlife, but mention of her losing faith can explain this away.

With some effective make-up and decent computer effects, Poser and Adams blur the line between reality and fantasy as identities merge and rage manifests. How they write Kurt’s guilt as a window between worlds that Echo can potentially exploit to speak with Ivy is a fascinating bit of imaginative construction too since it does leave him vulnerable. Because he can’t deal with what he’s done and Ivy can’t accept that her daughter is gone, the two unwittingly find themselves approaching a collision point with the girl as epicenter. Shame and grief refuse to let them part with her memory as Echo gradually pushes them closer together to earn a second chance at life. While her self-preservation isn’t to be ignored, however, neither is theirs. More bodies might still inevitably fall. That possibility is ultimately what keeps our interest because the likelihood that the wrong two souls survive (if any do) is an intriguing caveat to confront. To kill one might mean killing another, so the underlying duplicity beneath surface actions carries weight. This is key because the drama does fall into a lull now and then. The supernatural aspects of the whole don’t manifest until halfway through and Ivy’s seeming ignorance to them when they do (regardless of her complicity in their ignition) risks them never fulfilling their promise. That they do build towards a satisfying conclusion may leave us happy, but the bumpy road can’t simply be forgotten. While Poser and Adams do so much to overcome the production’s limitations, they unavoidably show through nonetheless.

This is why you must sometimes hold the ideas of a film above its execution. Ingenuity only gets you so far, but that’s okay if it gets you far enough. The Deeper You Dig does exactly that as it plays with the psychologies of its two leads joined via murder. We’re watching their parallel devolutions as they seek answers for what’s happening, leaving their nerves bare for what’s to come. Kurt is desperate to hide the cracks he cannot seal (much like his renovating his house to shroud their shared secret within its walls) while Ivy looks to rip open her wounds and foster the dark energy necessary to get back what was taken. While they both forfeit their humanity, only one does it for love.

The Deeper You Dig is now playing the Fantasia International Film Festival.