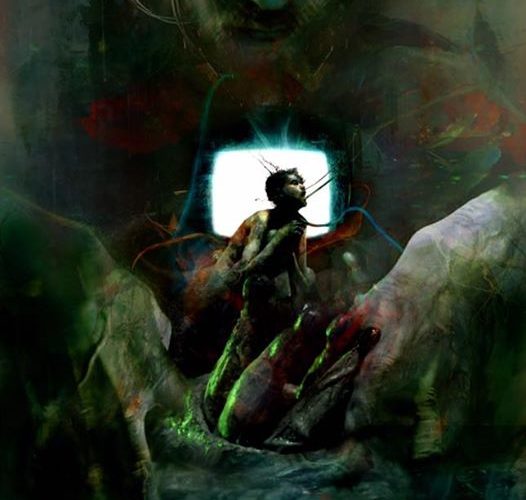 Fantasia Review: ‘Sequence Break’ is Cronenberg Without the Clarity

Introversion and high anxiety are real and can be triggered by the tiniest of things or the lack thereof. Oz (Chase Williamson) has struggled with both his entire life, that insecurity in social situations driving him towards the world of videogames. The joy of solitude playing them and being good at them brought him into a society of like-minded individuals and ultimately a career as mechanic to dinosaurs of derelict arcades past. Was he happy? Sure. Things could always be better, but isn’t that true for everyone? Routine might propel his actions — sleep, work, beer, and repeat — but it’s that type of monotony that keeps him safe. To take a chance on more would risk his falling apart completely. Unfortunately for him, change eventually comes for us all.

Graham Skipper’s Sequence Break takes us into Oz’s mind when the inevitable occurs. His world is turned upside down without warning: boss Jerry (Lyle Kanouse) reveals plans to close down their arcade repair shop/emporium the same day he meets a pretty videogame lover named Tess (Fabianne Therese) who inexplicably shows an interest in him. This is his moment to sink or swim. Either he rolls with the chaos to see Jerry’s retirement as an opportunity to finally dig into making games rather than just restoring them or he retreats further within himself towards a crippling depressive state. Either he believes what may form with Tess is real or he questions his worth to the point of pushing her away. Positive or negative, the ordeal puts him on edge.

It’s doesn’t therefore help that some weird stuff is going also on. Just as Oz approaches his breaking point, a malicious force enters his life in the form of a mysterious game that ultimately appears to be as much circuitry as it does biology. He doesn’t know its circuit board’s origins, only that it arrived in an unmarked envelope laying on the warehouse floor. It speaks to him somehow, on a wavelength that goes straight into his mind. So he plugs it into an arcade unit shell with only a joystick and two buttons on its console. He turns it on and becomes mesmerized by the spirographic shapes rotating on the screen, mashing the buttons and moving the joystick while a trance-like state takes over his very consciousness.

Comparisons to David Cronenberg have been made and the Canadian body horror maestro is definitely an influence — specifically through a Videodrome meets eXistenZ filter. The plastic knobs of the game become malleable, reacting to Oz’s movements until his interactions with the “White Eye” transform into sexual acts. While he remains cautious in the real world with Tess, this supernatural environment in the arcade allows him to shed his inhibitions. And every time he engages with the machine, the more it glows. Close-ups of the circuits reveal a viscous liquid pool atop their board, the electronics seemingly morphing into distorted flesh threatening to consume the object of their desire. The game provides Oz a reprieve from his panic and its price for such a gift is ownership of him.

We don’t really know what any of this means for three-quarters of Sequence Break‘s runtime. If anything the horror-infused interludes of man meets machine coitus become necessary distractions from the otherwise rudimentary romance. That’s not to say Oz and Tess’ burgeoning relationship isn’t cutely observed or authentically awkward, just that we begin to wonder whether their love provides fear for him to conquer or a reason to supply “White Eye’s” enigmatic protector (John Dinan) a potential victim. While the stakes do escalate, little happens to provide clarity for anyone’s motivations. Only when the machine is ready to evolve into its final state does artifice fade to reveal hidden answers. In the final twenty or so minutes we receive the information pertinent to looking beyond just literal readings.

I’m not sure how Skipper could have made things differently so that this sense of metaphor and psychological unrest arose earlier than it does, but it’s something the film desperately needs. For too long we find ourselves stuck on the surface, watching as this videogame seeks to destroy Oz for no reason other than that he works with arcade units. We become so fascinated by the psychosexual advances of their dynamic that the rest (namely Dinan’s nameless vagrant popping in with vague, toothless threats and Therese’s Tess gradually becoming the “other woman”) proves much less captivating. I personally became desperate to know the origins of the game and the truth to why it chose Oz — so much so that its transition to fantasy and/or allegory initially disappointed me.

Eventually this alteration of perspective becomes the film’s saving grace — its shift into an alternate dimension exposing the true turmoil raging within Oz beyond circumstances. I like being able to reinterpret my experience of a film by its ambitious finale’s revelations, but it’s even better when you possess an inkling of there being more than meets the eye beforehand. It feels strange to say that a sexualized 8-bit arcade system didn’t provide me enough ambiguity to know there was more beneath the surface of it as mere device, but that’s what happened. Trying to understand everything at face value because it’s presented as such prevented me from searching the fringes. In the end I wonder more about what I missed (or wasn’t there) than recontextualizing what I remember.