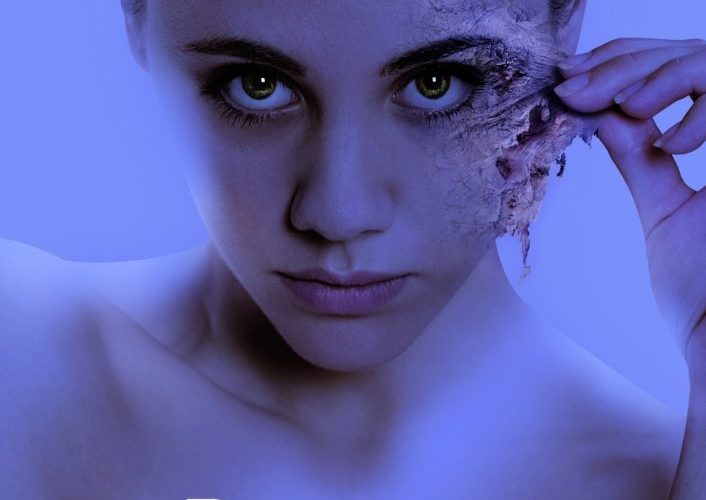 There’s a captivating science fiction horror concept at the back of director Norbert Keil and co-writer Richard Stanley’s Replace with the question: how far would you be willing to go for your youth? Do you crave longevity? Vanity? Rebirth? What would you sacrifice for it? Memory? Sanity? Life itself as the past becomes a voluntary casualty of the future? This stuff is ripe for body horror grotesquery, philosophical query, and hubristic intent. And in some respects Keil and Stanley’s film touches upon each one of those promises too. Where it stumbles is execution. Rather than let us indulge in that potential from the start, the movie seeks to keep us in the dark. It’s a choice meant for suspense, but reality has it cultivating a waning interest instead.

The reason for this is an added detail not necessarily received from a synopsis explaining Kira Mabon’s (Rebecca Forsythe) rejuvenation process for her mysteriously decaying skin. We know she can graft another human being’s flesh to her body for instant alleviation of pain and aesthetic dissonance. We know her doctor (Barbara Crampton’s Rafaela Crober) can’t simply be throwaway voice of reason prolonging real help while unwittingly forcing Kira into a killing spree of young woman with the smooth epidermis she desires. But we must tread water until revelations open our eyes to the truth since our lead suffers from amnesia. She barely knows who she is or where she lives. Everyone she encounters is a stranger right down to the person in the mirror rapidly crystalizing beneath a hardened shell. It’s actually a welcome device initially since we become as disoriented as she at the start. With a washed out visual filter masking modern sets draped in cool colors so the red of blood and danger can pop off the screen, everything seen is presented as though a dream. We become embroiled in a date of role-playing right out the gate with Kira and her beau Jonas (Sean Knopp) sparking sexual attraction all the way to his apartment. But is that where they go? Is he even real? From a shadowy striptease to a sunny morning steeped in confusion we watch Kira go in circles. Clues towards what’s happening bring flashes of nightmare and the figure of an unknown little girl. It’s a steady, out-of-nowhere descent into madness.

Only her new neighbor Sophia (Lucie Aron) can attempt to supply some clarity as an outsider who may or may not have her own sexual attraction to Kira. They find an appointment card with Dr. Crober’s name, phone the office to learn Kira had attended, and schedule a follow-up for that afternoon. Finally I thought I’d be getting some answers—this construct of amnesia could begin to dissipate so that the truth of what’s happening could sneak its way through. But I was wrong. Crober is at a complete loss with this weird skin disease. She comforts Kira by saying a skin transplant could help, but the details of such a surgery would be unknown until more tests were performed. Suddenly I knew even less than I did. That’d be okay if things were moving towards answers, but they weren’t. It’s just an hour of Kira taking matters into her own hands instead. This leads to some effective gore and gorgeous nighttime scenes with hypnotizing imagery, but it’s like walking through molasses without an end in sight. Love sparks between Kira and Sophia. Kira’s temperament pushes Sophia away before prowling the streets for victims with compatible skin. And the frustration from Crober always saying, “Let’s see how things look next time” gets Kira’s blood boiling. It’s a three-step process that repeats itself at least two times before the lies start erasing. Sadly this monotony delivered at an extremely slow pace lulled me to sleep. The “good stuff’s” arrival therefore came with relief rather than excitement.

It’s a shame because the final act is full of intrigue. Everything that didn’t quite fit in the first two acts makes sense, but that clarity comes via pre-planned reveal through dialogue rather than natural “A-ha!” moment of discovery. Keil and Stanley are taking us somewhere special, but they forgot the journey there must be more than a delay. We as audience members need to invest and the prospect of yet another random killing isn’t enough. Since we know there’s more than meets the eye, to smugly hide it breeds anger rather than anticipation. To keep us in the dark so long without a hint at an antagonist forces us to create one. The only candidate is Kira herself and that means we can no longer care about her survival. The truth arrived and I could only appreciate it on an abstract level. There’s an increase in aesthetic beauty, graphic content, and unpredictable performances (Crampton does excel), but I felt far removed. I watched it unfold and mechanically fit everything together with what came before—my emotional connection to the fates of Kira or Sophia gone. They became pawns to Keil and Stanley’s twist, itself not wholly original to “wow” us into adulation. Things eventually devolve into a lot of talk about motivations, fault, and ownership—the type of stuff a Bond villain would reveal before his/her demise. The really interesting psychological conundrums that reconcile past with future come and go without the time necessary to give them the weight they deserve. And the final fifteen minutes is blood.

On that level Replace is a success. It makes us squeamish with effective practical effects, titillates with a narrative device guaranteeing bare breasts are never far away, and possesses a memorable conceit. If the latter was exposed earlier so the stakes could be increased by its revelations, this might have proven a genre gem. Holding the film’s best attribute back until there were no stakes left only disappoints. The notion of Kira’s decaying skin and its figurative and literal metaphors on aging and vanity is enough to build from. Adding an amnesia subplot does ultimately make scientific sense in the long run, but it also presents itself as a clichéd excuse to hide secrets—one of many narrative conveniences distracting from the main engine rather than augmenting it.