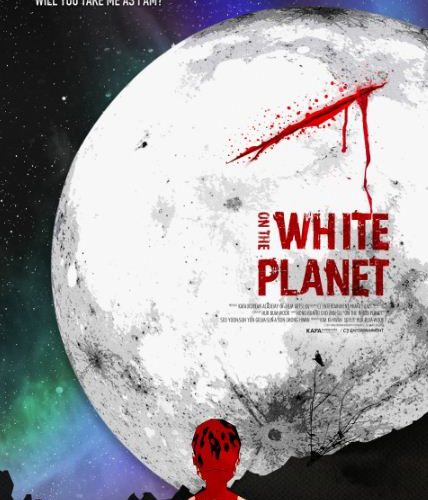 [Fantasia Review] On the White Planet

South Korean animator Hur Bum-Wook isn’t afraid to dive head first into some dark subject matter – in his 2011 short City of Good People, abstract images and a minimalist score were used to depict a grandmother’s hopeless search for her missing, and presumed dead grandson. For his feature debut On the White Planet – which, earlier this year, won the Grand Prix at the Holland Animation Film Festival – he explores racial and class prejudices with a bleak, dystopian tale.

The 2D animated work pulls no punches as it opens on a brutal scene of the teenage main character stabbing a man in the throat. Born into a world devoid of color, the yellow-skinned boy lives alone in the woods, where he’s relentlessly hunted by townspeople and authorities who view any non-white being as a threat to their society. Orphaned and on the brink of suicide, he’s soon taken in by a gang whose charming, but ruthless leader grooms him into the perfect assassin. But when the boy kills the leader’s pet right hand man in retaliation for rape, it sets off a chase across a desolate, colorless landscape where no one may survive.

The film boasts an outstanding style, with its monochromatic palette, static backgrounds, and painterly lines recalling, to some degree, the fantastic imagery of Moebius. Some of the choices demonstrate a daring streak in Bum-Wook, as he tests the boundaries of animation with live-action inserts of fireworks, smoke, and human hands, as well as taking cues from the artistry of independent video games. During one scene, the screen resembles a side-scrolling game as the boy evades his pursuer by leaping and swinging effortlessly from tree to tree in his forest sanctuary. Employing these techniques – along with the added bonus of cinematic editing – provides a surprising, and much-needed visual diversity to the film’s overwhelming starkness.

But while the formal elements make White Planet beautiful to look at, the content makes it exceedingly hard to watch. “The one who kills more controls the world,” says the gang leader to the boy, and the words ring eerily true as the characters engage in a nasty game of kill-or-be-killed where no one, except the state, comes out on top. Even so, wincing through multiple head shots and exposed brain tissue is hardly necessary to understand the film’s simplistic message. The gloom and doom leaves viewers with little to chew on as it desperately reaches for provocative, but comes off as clumsily facile.

Though On the White Planet fails to leave a lasting impact, its imaginative, nightmarish look does combine well with the grim tone, and makes for a compelling alternative to the meticulous polish of mainstream animated films.

On the White Planet is screening at the 2015 Fantasia International Film Festival.