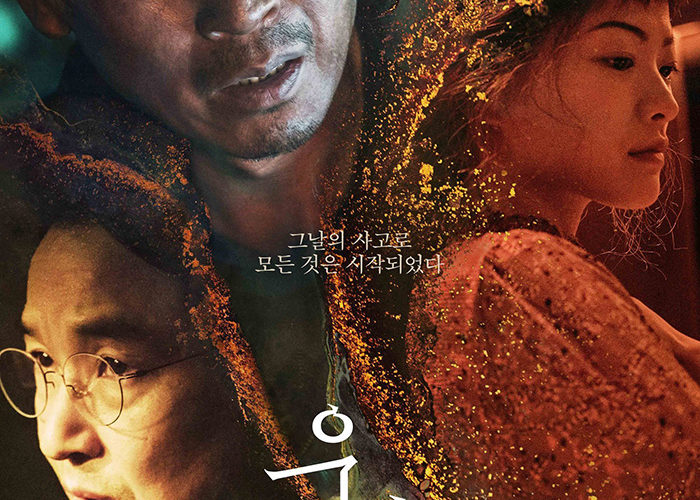 Two fathers and two sons are embroiled in the aftermath of a cover-up wherein one boy winds up dead and the other imprisoned. Su-jin Lee could have spun his tale with little else since the perpetrator’s (Jo Byeong-gyu’s Yo-han was behind the wheel, drunk and speeding down a quiet service street) father (Han Suk-kyu’s Koo Myung-hui) is a political messiah running for governor while the victim’s dad (Sol Kyung-gu’s Yoo Joong-sik) possesses just enough desperation and desire for retribution to go to court and make certain no strings are pulled behind the scenes for leniency. Although that’s the sort of heavy drama that can sustain a film like Idol for at least ninety minutes, Lee thinks much bigger as his never-ending series of incendiary twists and turns unfolds.

His first step in making things hurt is providing these fathers a choice. Koo comes home from a business trip to find his wife in the garage next to a dead man wrapped in plastic. Does he help erase the evidence and ultimately the body? Or does he weigh the price of doing so and discover that putting the body back at the crime scene, forcing his son to turn himself in, and playing damage control with supporters via contrition is the better option for his career? As for Yoo, does he grieve and move on? Or does he do whatever it takes to find his boy’s illegal immigrant wife (Chun Woo-hee’s Choi Ryeon-hwa) in the hopes she was there to see something that could blow the case wide open? Both unsurprisingly choose their second options for added intrigue only to become victims to unforeseen consequences. Every step towards maintaining the lie and exposing the truth respectively pushes them to the brink of sanity by presenting ever more dangerous and darker decisions. Because what happens if Koo finds Choi first? How far will he go to protect his son’s chances at probation by controlling the cover-up with purpose rather than fear? Here enters a private detective devoid of scruples (Kim Jongman’s Kim Yong-goo) playing both sides for additional revenue as Yoo digs into Choi’s past to unearth violent secrets that present the plot infinite new paths forward. What started as a high-pressure familial thriller soon embraces that brand of bleakly warped Korean cinematic carnage we’ve grown to enjoy.

Some of where Lee takes his characters can prove confusing as a result because certain revelations take more blind trust than others. When the prospect of another man being at the scene of the crime arises, we comprehend the physical evidence Lee returns to for meticulously planned clarity if not the contextual relevance beyond its inclusion to confound and shock. He sprinkles in little details with the intent to go back and wield them as weapons later until the car crash drama becomes virtually forgotten in lieu of a more insidious affair steeped in the perilous world of sex work, illegal immigration, and survival at all costs. How Koo and Yoo come together is merely a tragic, bad luck circumstance that brings them unwittingly into Choi’s destructive orbit. But even as she becomes the main focal point of this rapidly devolving situation that compromises the morals of all involved, we never do leave this notion that Koo is a beloved public figure behind. That position of power is what everyone around him needs to keep going whether it’s his son’s chances of early release, Choi’s dream of citizenship, or Yoo’s desire to save what’s left of his broken family. It’s therefore not only Koo who continues to choose his career over everything else—the rest do too. And why not? He’s a smooth-talking herb salesman turned politician who’s risen the ranks with approval ratings that make it so Yoo’s wife apologizes to him for his son killing her own. He’ll spin anything to his advantage.

This is a crucial point because Koo’s involvement gets moved to the background once the wild journey from China to Korea that Choi took takes over. What did she do to make that migration possible and whom might she have angered in the process? Yoo has reasons to not care—even though this woman’s relationship with his mentally disabled son is forever marred by its transactional strings—and will do anything to protect her first as a witness to ruining Koo’s life and second as a potential means towards bettering his own. Everyone is thus progressing with self-interest at heart while Yoo’s lawyer (Yoo Seung-Mok) stands alone in his pursuit for actual justice. The bargains they make with each other to constantly endanger that truth only get crazier. Idol unravels like a depraved soap opera in this way as insane facts are only overshadowed by the insane lengths these characters go to hide them. At one point a witness presents the possibility that Yoo was at the scene of his son’s death and kidnapped Choi himself. It’s completely implausible considering how he has reacted since, but we would never be surprised to discover it true. After all, the film begins with a line of dialogue shared by a father about how he used to masturbate his son in order to alleviate the boy’s stresses (because he couldn’t do on his own). Why couldn’t we therefore assume jealousy or mental illness? Lee ensures we’ll believe anything because we must to go along with where he’s taking us.

The destination is one of violent ends made impossibly sad by the love driving these characters forward. Yoo’s paternal instincts resonate most, but you can’t discount Koo’s love for a future in office letting ambition best his decency (although his mother makes us wonder how he ever possessed decency to begin with). Corruption becomes the film’s central tenet as Koo continues his ascent and Choi finds baser instincts letting her conjure the bloodlust necessary to hurt those who’ve damaged her chances at freedom. Everything that transpires is thus outrageous only in its visceral execution since it all makes complete psychological sense in the bigger picture of their doomed, shared experience. And in the end right and wrong prove inconsequential anyway when confronted by public opinion’s authentically vulgar barbarity.