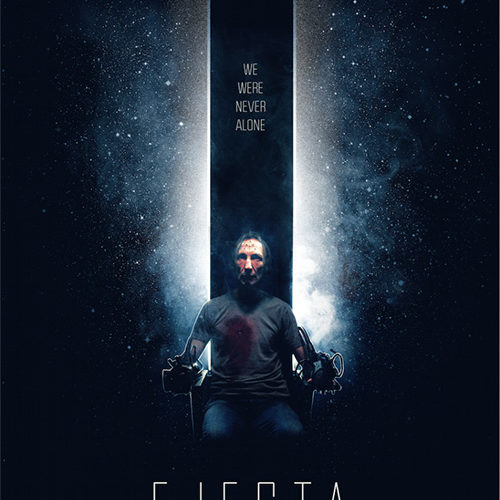 Many might take my comparing Ejecta to The Fourth Kind as a slight, but I actually enjoy the latter feature. While Chad Archibald and Matt Wiele‘s science fiction horror doesn’t pretend it’s real, the crosscutting between time and styles similarly keeps us off-balance enough to buy into the escalating danger onscreen. We’re shown straight away that a government or privatized military agency has captured William Cassidy/Spider Nevi (Julian Richings) in the woods through night vision goggles and yet this convergence is the mid-point of the story. What comes after during his interrogation by Dr. Tobin (Lisa Houle) with extraterrestrial devices is as important as what came before. Alien chaser Joe Sullivan (Adam Seybold) simply wanted to interview Cassidy on the cusp of an astronomical event earlier that evening. They all got more than they bargained for. Written by Tony Burgess—no stranger to Canadian-produced genre work with Septic Man and Pontypool under his belt—Ejecta is an intriguing hybrid that preys on our curiosity and fear. The man at its center has accepted his fate after attempting to tell the world something was done to him thirty-nine years ago, living in seclusion with the pain of whatever the aliens left inside him. Cassidy only sleeps a few hours a week because while it hurts to be awake, the horrors of slumber are infinitely worse. Doctors and even Sullivan—a believer—are quick to dismiss it as nightmare, but William knows better. And so do we after hearing him tell Joe on arrival that he’d never willingly invite a stranger over despite our having already seen the email doing exactly that.

Set on the night of a coronal mass ejection (where a burst of solar activity sends flares from the sun to the Earth’s atmosphere), our assumption that this timing isn’t a coincidence is proven early after something from the sky lands in Cassidy’s backyard. Being newcomers to the story, we must glean exposition through the concurrently displayed interviews happening hours apart by Joe and Tobin. The former captures William’s depressing tale of alien encounter and the life lived as a result while the latter forces him to talk about the evening’s activities ultimately used to display how we’re not alone. Joe’s hand-held footage captures the chaos from the falling debris to the monster roaming the woods to the revelation that nothing—not even the alien creature—is what it seems. And through everything Cassidy simply desires an end. The film possesses pretty high production value considering it was most likely shot on a tight budget with only the three main actors and a handful of background players. Suspense is ratcheted up thanks to the hide-and-seek shaky-cam sequences of Joe and William running from a creature we barely see silhouetted in the distance whenever light and framing align as well as from creepy machinery Dr. Tobin utilizes to torture her prisoner that glows bright in a lava haze while pained screams turn its beauty into despair. Cassidy is definitely the key to unlocking whatever it is going on, but he’s been holding that responsibility for too long to simply let it go. He’s tested his limits over the years in hopes he could stop the nightmare so nothing they do can scare or harm him.

Richings is fantastic as Cassidy, possessed by vulnerability yet never presented as weak. His past has hardened him into the unfazed man we meet alongside Joe at his door—a man used to being marginalized who’s resigned himself to the internet to tell his story whether anyone believes him or not. The actor is slight and yet his stoicism provides strength of character you aren’t used to seeing out of stock alien abductees. William is very much in the vein of the Second Mass from Falling Skies: a fighter who is done being controlled. Unfortunately for him, though, his stand is without support. The only other people who know the truth would rather follow him and wait for an alien return than help. Like other contemporary sci-fi, they don’t realize the aliens may have been here all along. The performances by Houle and Seybold are effective with her tough, authoritative indifference playing too melodramatic and fake at times while his inclusion is more as a cameraman than anything else. They both honestly exist to peel the layers back on the truth and serve as catalysts for us to finally see what Cassidy becomes when he’s no longer consciously in control. Secrets are revealed and answers explained that lead us to a pitch-black finale showing just how unprepared we are as a planet to face a highly organized and covert infiltration from space. Archibald and Wiele take Burgess’ script and bring it to life with effective visuals and suspense, drawing us in to discover the truth. Maybe “the other” has been watching since before humanity. Maybe there’s nothing we can do but wait for our demise.